Prevention Science across the Globe 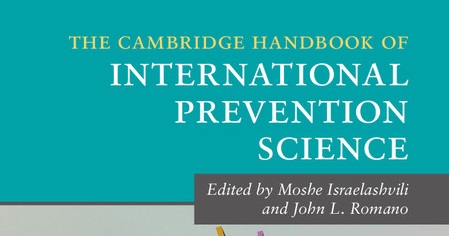 An extremely wise man (some people believe it was Albert Einstein, others are not sure) once said: “A clever person solves a problem. A wise person avoids it.” Unfortunately, for too many years this notion remained only a nice idea, rather than practice. As a discipline, psychology and other mental health professions have historically emphasized crisis interventions and therapeutic applications once a problem has manifested itself, and much of the research and training is concerned with “fixing” problems after they become manifested. This gap has been ­ (and is still) fueled by several reasons, such as political pressures to show quick improvement, lack of investment in prevention from policy makers, weak motivation from lay persons to practice prevention, and limited evidence-based knowledge on how best to prevent problems in most countries and regions of the world. Prevention science, as a relatively new and interdisciplinary specialty, aims to place much greater emphasis to prevent problems before they become problematic to individuals and communities.

Yet, there are several other important gaps that still wait to be bridged, such as the gap between Westernized knowledge and the accumulating knowledge in other parts of the world. Namely, while Western countries have provided most of the research and scholarship associated with prevention science, other countries have also been developing applications and research to support a prevention science perspective. A major goal of our recently published Cambridge Handbook of International Prevention Science (Israelashvili & Romano, 2017) is to bring the perspectives of scientists, practitioners, and policy-makers from across the globe to share their perspectives, interventions, and research in one volume for the global community of scholars. As such the Handbook consists of 43 chapters written by over 100 authors from 27 different countries.

Too often prevention specialists in many parts of the world work in isolation from others outside of their country or region. Hence, in addition to presenting a global perspective on prevention science, the Handbook hopes to strengthen communication and dialogue across countries and regions to give scholars and policy-makers increased access to each other. Moreover, by suggesting the Handbook as a comprehensive resource for consideration by researchers and practitioners from all relevant professions, we believe that there will also be greater sharing of information, policy developments, and intervention strategies, between people who pursue ways to prevent problems and those who search for ways to reduce existing problems. We welcome your response to this post, and perhaps begin a global dialogue about prevention science within your context.

About the Author: Moshe Israelashvili

Moshe Israelashvili is Associate Professor in the School of Education at Tel Aviv University. He has extensive experience in prevention programs' development, implementation and evaluation, especially in the context of children and youth resilience promotion and substance abuse prevention. He is a consultant to major institutions in Israel, such as...

The Cambridge Handbook of Infant...

The Cambridge Handbook of Infant...

Why We Need an International...

The Fables at the Heart of...