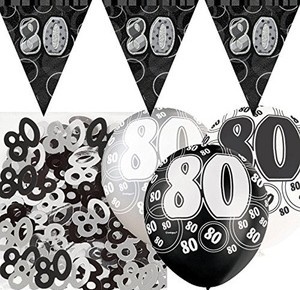 On October 3, 2016, Steve Reich celebrated his 80th birthday. This festive occasion was the catalyst for a year-long tribute to the man who has been acclaimed as “our greatest living composer” (New York Times) and “the most original musical thinker of our times” (The New Yorker). A quick glance at the concert section of the Steve Reich website shows that his compositions are being performed almost every day of the year somewhere in the world. Many of these concerts this year, especially the ones with Reich in attendance, have turned into rousing birthday parties with premieres of brand new compositions from the composer who is now officially an octogenarian. 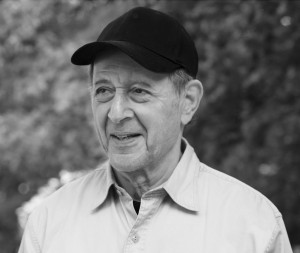 Reich’s actual birthday was on Rosh Hashanah, and he spent the day in observance of the holiday. As my way of honoring him on that day, I announced the publication by Cambridge University Press of my book Performance Practice in the Music of Steve Reich for which Reich wrote the foreward. 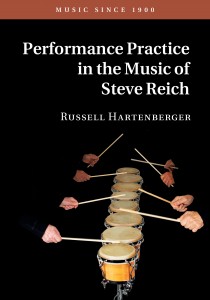 Steve Reich came to my home town of Toronto in April for performances of Drumming, Part I at Integral House and Clapping Music, Tehillim, and Music for 18 Musicians at the venerable Massey Hall as part of a Soundstreams Canada birthday celebration. 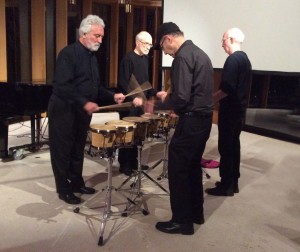 In May, members of Nexus, Sō Percussion, and Palladium Percussion performed Mallet Quartet, Mallet Phase, and Music for Mallet Instruments, Voices, and Organ at the BRIC House Ballroom in Brooklyn at a concert organized by Sō to honor Steve Reich in his 80th birthday year.  Mallet Phase is Garry Kvistad’s new arrangement of Piano Phase played on instruments he created and tuned in just intonation. 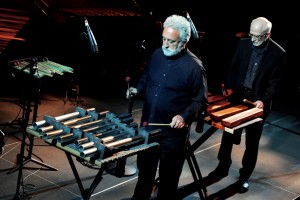 During the festivities, Jason Treuting presented Steve with the ‘piece of wood’ that Sō used for many years to play the pulse part in Music for Pieces of Wood. 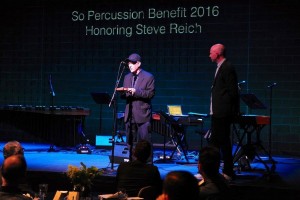 Reich preferred not to have any big parties until after his actual birthday, so the first official celebration of his milestone birthday was at Carnegie Hall after a concert that featured his Quartet for two vibraphones and two pianos, a premiere of his new work, Pulse performed by ICE and conducted by David Robertson, and the Reich/Korot video work Three Tales performed by ICE, Sō Percussion, and Synergy Vocals with Robertson again conducting. Following the performance there was a birthday party in the Rohatyn Room in Carnegie Hall with cake and an enthusiastic singing of Happy Birthday to Steve Reich by musicians and friends. 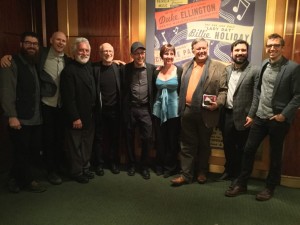 Just a few days after the festivities at Carnegie Hall, Reich was honored in London’s Barbican Centre with a weekend full of concerts. Alex Ross, music reviewer for The New Yorker was on hand to speak about “The West Coast Roots of Minimalism.” His lecture was followed by performances of City Life and Drumming by students from the Guildhall. The Saturday evening marathon concert included Pendulum Music, Nagoya Guitars, Electric Counterpoint (played by Mark Stewart and twelve other guitarists including the New York quartet Dither), Different Trains, Pulse, and concluded with Three Tales performed by the Britten Sinfonia, conducted by Clark Rundell. 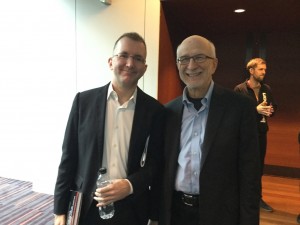 On Sunday afternoon at St. Luke’s Church near the Barbican, Steve Reich was the guest on an LSO Discovery day event that was moderated by Sarah Mohr-Pietsch, a presenter from BBC Three. The afternoon began with a performance of New York Counterpoint by Chi-Yu Mo and ended with Piano Counterpoint, an arrangement by Vincent Corver of Six Pianos for soloist and pre-recorded CD. In between was a wide-ranging discussion with the performers and Reich, and I was delighted to join them in the conversation. The evening concert featured the London Symphony Orchestra, conducted by Kristjan Järvi, and Synergy Vocals in Daniel Variations, You Are (Variations), and The Desert Music. 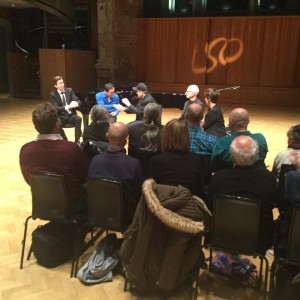