What did the real ‘Judith Shakespeare’ write, and where can we read her works? Virginia Woolf tried to imagine a woman writing in the golden age of the English Renaissance, and she invented a sister to Shakespeare whose literary dreams were unfulfilled, who died a tragic death, and who is buried anonymously somewhere near where the omnibuses stop at the Elephant and Castle. It’s a captivating fiction but it is far from the truth, and it is a fiction that leaves no inconvenient texts, no body of work to be grappled with. Judith Shakespeare died mute and inglorious, any scribblings in an apple-loft carefully hidden or burned.

Reality is (as is frequently the case) more complex. Early modern women wrote prolifically in every genre: poetry, prose fiction, letters, diaries, religious writing of many kinds, translations. And women from every level of society wrote, from Queen Elizabeth I down to humble women in the civil war period who wrote prophecies and poetry. We in fact know of over 600 printed texts by women in the years between 1500 and 1700, and over 400 manuscripts in women’s hands. But while there were a few exceptions, this body of work had faded from view until the last fifty years or so, in which a sustained recovery of early modern women’s writing has been underway.

Complex questions have arisen about what to do with women’s texts when they are uncovered in print and manuscript archives. How do we ensure that they make sense to modern readers, and that they are useful for scholars? How do we edit texts that do not fit easily into conventional taxonomies of ‘literature’? Early modern women’s texts often look different from men’s: they may be in unfamiliar genres, such as ‘mother’s advice’ pieces written to daughters or sons, fragmentary autobiographies, or so-called closet dramas. They were often not print-published, and exist only in manuscript copies. Some of the most important texts by women exist only in a single manuscript; others, such as the speeches of Queen Elizabeth—have multiple witnesses of various authority. These women’s texts (and we deliberately avoid the term ‘works’, with its implications of a platonic, ideal form) present all sorts of challenges. How well do the mainstream practices of textual editing, honed over centuries of grappling with Shakespeare and Milton, serve texts by early modern women? Do early modern women’s texts require a different set of approaches in order to make them accessible, comprehensible, and enjoyable for modern readers? Does the editing of early modern women’s writing—complex, various, and often unexpected in kind—in fact suggest new ways of approaching those better-known, canonical texts? 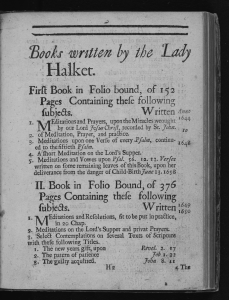 We conceived of Editing Early Modern Women as a way to address these and related issues, assembling essays by some of the most prominent editors of early modern women’s texts over the last twenty years. Suzanne Trill, for example, has grappled with an enormous archive of writings by the seventeenth-century royalist Anne, Lady Halkett. What in that enormous archive makes it into a ‘selected writings’ edition and why? What sort of early modern woman author is produced by the selection choices that the editor makes? Ramona Wray has edited Elizabeth Cary’s The Tragedy of Mariam for a mainstream Arden edition. What is involved in setting Cary’s play alongside Shakespeare and Marlowe for classroom teaching? What contexts need to be presented, and to what extent should the play be discussed as a ‘woman’s text’?

Editing, that most staid of scholarly activities, has profound effects on how texts are consumed: how we conceive of them, and whether or not we read them all. The reclamation and re-presentation of works by early modern women has been an intense and revolutionary intellectual enterprise in recent years, and this process of recovery has generated theoretical disputes and practical insights that had not, until now, been considered in one place. Editing Early Modern Women does this, assembling essays by editors who we knew who could also be relied on to be self-reflexive, and to open up the widest possible issues and responses to current questions about editing in general, editing early modern women in particular, and also often to address broader issues connected to the way that literary and historical studies might address the transmission and interpretation of texts. The volume is part of an extensive, collaborative scholarly process that is allowing women writers of the past to speak more clearly, and to be heard, in and through the extensive body of texts that they left behind.

About the Author: Paul Salzman

Paul Salzman is Emeritus Professor of English at La Trobe University, Australia. His most recent publications include Reading Early Modern Women's Writing (2006) and Literature and Politics in the 1620s: Whisper'd Counsells' (2014). He is the editor of four World's Classics volumes, including Early Modern Women's Writing: An Anthology and Aphra Beh...

Sarah C. E. Ross is Senior Lecturer in the English Programme, at Victoria University of Wellington. She is the author of Women, Poetry, and Politics in Seventeenth-Century Britain (2015) and the editor of Katherine Austen's Book M: British Library, Additional Manuscript 4454 (2011). She has written numerous articles on early modern women writers, r...