On March 8, women all over Latin America will participate in the first international strike to protest gender violence, labor and economic exploitation and feminicidios, the murders of hundreds of women all over the continent. The political organization of women to protest unfair and unequal treatment has a long history in Latin America, where women have been committed to forms of resistance as leaders in social movements and the originators of novel forms of political intervention. The chapters of The Cambridge History of Latin American Women’s Literature Ileana Rodríguez and I edited provide multiple examples of variegated ways in which public intervention in culture and in the public sphere has figured in women’s lives. Through our analysis of literature and culture, we give our readers a privileged prism into women’s lives through hundreds of years of life in the continent. We also show that writers often combined activism with stylistic and linguistic innovation. 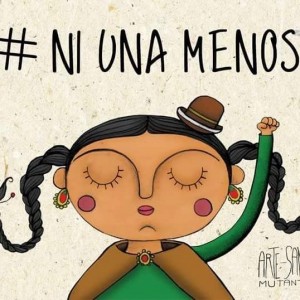 Most histories of Latin American literature start with the arrival of the Europeans because a particular way of registering history – the written word – arrived with them. However as we opened up our study to other cultural forms of expression, from oral narratives to pictographical forms, we ushered in a whole area of hitherto unexamined experiences and cultural productions. To undermine the privileged position of Spanish and Portuguese as the literary languages of the region, we included works produced in indigenous languages, the lingua francas of the Caribbean and the texts of Latina writers in the United States and Canada.

In our Cambridge History of Latin American Women’s Literature, literature bursts at the seams unveiling a wealth of women’s cultural production that is surprising in its quantity, quality and diversity. It includes lyric poetry, agiographical writing, testimony, performance. It involves the Marches of the Mothers of Plaza de Mayo demanding to know where their children disappeared during the bloody military regime of 1970s Argentina were, and Mayan writers in Guatemala learning the languages of their ancestors in order to express the dearth of the loss during the same period.

While our volume focuses on literature, we nuance the concept of the literary in order to give a more comprehensive and attentive account to depict how culture is the privileged site for investigating women’s lives. For instance, the poetry of Sor Juana, which includes the most exquisite sonnets of the Spanish language, has been read to depict women’s coming into consciousness of self. This is a poignant example of how different forms of the literary have met the needs of different reading communities at different times and have played a role in the colonial world, in nation building, and in the social and political life of the region. We therefore reconsider the historical articulation between oral and written worlds and in the ways in which women have creatively engaged in the social and political spheres from the ancient indigenous worlds to the present. Guatemalan poet Nij Nij writing in in the Kaqchikel language expresses her own trajectory from domestic service to activism and poetry beautifully in these terms: “I kept poetry inside me, it was born with me, I was a poetry archive, I was engendered wit.”

Women have been present in every aspect of political life in Latin America: as workers, peasants, teachers, human rights leaders, labor organizers, political prisoners, and some have recently rose to the highest political posts including the presidencies of Argentina, Brazil, Chile, and Costa Rica. Women writers have taken over taboo spaces, in order to broaden their world inside and outside their homes, and also within the literary institution, and have produced works of extraordinary value. The March 8th strike is a call to awareness about the limitations still imposed on women’s lives. Like they have been doing for hundreds of years, Latin American women will again be out in the streets.

About the Author: Mónica Szurmuk