The LLE and Patern Formulation

Luigi Lugiato, author of Nonlinear Optical Systems , 2015 discusses the equation he formulated with Renè Lefever to provide a paradigm for pattern formation in nonlinear optical systems

The year 2017 will mark the 30th anniversary of the equation formulated by Luigi Lugiato and Renè Lefever to provide a paradigm for pattern formation à la Turing in nonlinear optical systems [1]. Chapter 28 of the book Nonlinear Optical Systems by L. Lugiato, F.Prati, M.Brambilla, published in 2015, is devoted to the illustration of the meaning and the predictions of such an equation, that in the following is indicated by LLE.

Phenomena of spontaneous pattern formation, both of spatial and of temporal nature, are ubiquitous in the vast domain of nonlinear dynamical systems, encompassing for example hydrodynamics, chemistry, biology, population dynamics, and social sciences. The LLE was conceived by following a criterion of simplicity, which led to the selection of an optical ring cavity containing a medium with a cubic Kerr nonlinearity and driven by a stationary coherent input field. The combination of the Kerr nonlinearity and of light diffraction gives rise to a rich variety of 1D and 2D patterns, and to cavity solitons, which develop in the transverse planes orthogonal to the longitudinal direction of propagation of light in the cavity.
Some years after the introduction of the LLE Haelterman, Trillo and Wabnitz formulated the temporal/longitudinal version of the equation, in which diffraction is replaced by group velocity dispersion. In this case patterns and cavity solitons develop in the longitudinal direction, propagate along the cavity with the light velocity and generate a periodic train of pulses in the output of the cavity itself.. In this way, the LLE unifies spatial phenomena that arise in the transverse planes, with spatio-temporal effects that occur in the longitudinal direction.
Optical frequency combs are sets of equidistant frequency lines in short-pulse mode-locked lasers. Their discovery by John Hall and Theodor Haensch (who received the 2005 Nobel Prize in Physics for this achievement) revolutionized the measurement of frequencies and opened out a vast scenario of applications. In 2007 Kippenberg and his group demonstrated the realization of broadband frequency combs using the whispering gallery modes in high-Q microresonators containing Kerr media .The generation of such combs occurs from the four-wave mixing processes activated by the interaction of the monochromatic driving field, injected with a frequency resonant with a cavity mode, and the Kerr medium. Thus such systems con be considered as novel multi-wavelength coherent sources, where all the lines, except the central one corresponding to the driving frequency, are created by the gain induced by the four-wave mixing. Kerr frequency combs, generated in microresonators such as that shown in Fig. 1, 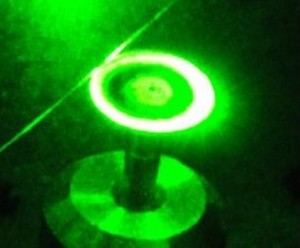 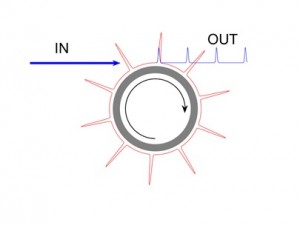