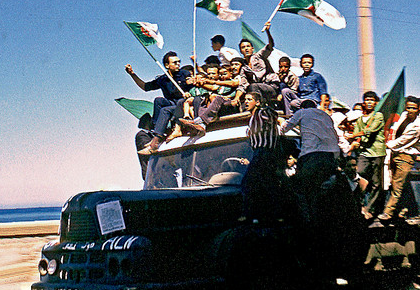 The Discovery of the Third World

Christoph Kalter is the author of a new book,The Discovery of the Third World,which charts the parallel emergence of the 'Third World' concept and a new radical Left in France. In this article, he explores how the Third World concept has changed through history and what it means today.

Do you recall the last time you stumbled upon the expression ‘Third World’? Chances are it was in September 2016—and that it was, as happens so often these days, once again Donald’s fault. In fact, during the first of three presidential debates with Hillary Clinton, Trump ranted about the substandard efficiency and elegance of American airports:

Comedian Trevor Noah, host of the US late-night Daily Show and of South African origin, felt “personally offended” by Trump’s remark. His reaction was explicit: “Our airports are nicer than yours, Donald Trump. A**hole, you didn’t land in a third world country; don’t involve us in your problems.”[2]

If we can learn anything from this heated exchange, it is that the ‘Third World’ today has a bad name. Many of those who still use the term associate it with poverty, natural disasters, epidemics, starvation, ethnic conflicts, corruption, failed states, religious fundamentalism, terrorism, refugees, and, why not, with lousy airports. They see the Third World as needy, or dangerous, or both; one way or the other, they think it is technologically, economically, socially, politically, and culturally deficient and in need of appropriate development. Others, by contrast, avoid using the term altogether precisely because they resent the Eurocentric ring that it has to it today: The ‘Third World’ to them seems like a highly normative and outdated concept from Cold War times, a deprecating label that Western politicians, journalists, and aid workers used to lump together the most diverse societies of the Global South, ultimately in the hope of perpetuating White, Western capitalist supremacy.

It hasn’t always been like that. Quite the contrary, in fact, as throughout the ‘long 1960s’, the Third World was a beacon of hope. Leftist groups, student protesters, and social movements in Europe and the US, anticolonial activists in Asia and Africa, as well as reformers and revolutionaries in Latin America collaboratively created the idea of the Third World as a promising alternative to the destructive antagonism of the Cold War. They saw the Third World as the geopolitical space outside the blocs where the planet’s future was being played out. But they also felt the ‘Third World’ was actually more than a place—it was a project, and a truly global one at that: If activists in Europe joined forces with Asians, Africans, and Latin Americans, then this new coalition would move beyond the capitalist-socialist binary, end colonial and imperial oppression, and defeat Western superiority complexes. In a sweeping movement of transnational solidarity, the Third World would finally restore humanity to all humankind.

Unfortunately, these high hopes did not materialize. But it is fascinating to see how they came into being, who fought against whom and for what under their banner, and why these hopes were so thoroughly devalued since the early 1970s, leaving us with the image of a miserable, dangerous, and third-rate ‘Third World’—the image that Trump and Noah evoked in their comparative analysis of global airport standards.

My account of how the concept of the Third World emerged in France from the mid-1950s through to the mid-1970s alongside a new leftist movement looks into these questions. In writing the book, I wanted to reveal how in an age of the Cold War, decolonization, and developmental thinking, French activists rose to prominence within the political Left, established transnational contacts, and developed a new global consciousness. They launched publications such as the Third World-review Partisans, parties such as the PSU, and associations like the Cedetim. Using the Third World concept to reinvigorate anticolonial solidarity, they supported the Algerian FLN, the Cuban Revolution, and the liberation movements in Vietnam and Portuguese Africa. Insisting on the postcolonial character of France after the end of empire, they promoted new forms of cooperation with developing countries and immigrant workers.

The global contexts that encouraged their hopes have changed, and the impact the global Third World-movement had now belongs to history. However, some of its questions—how we can end imperialist wars, fight global inequality, and abolish racism, how we can think about solidarity in a world that is simultaneously smaller and bigger than ever before—are still pertinent to many today. My inquiry into the new radical Left in France cannot answer these questions, but it is my hope that it can give them historical depth.

The Discovery of the Third World:Decolonisation and the Rise of the New Left in France, c.1950–1976 by Christoph Kalter is out now.

About the Author: Christoph Kalter

Christoph Kalter is Professor of History at the University of Agder, where he specializes in the modern history of Western Europe in its global contexts. He is the author of The Discovery of the Third World: Decolonization and the Rise of the New Left in France, c. 1950-1976 (Cambridge University Press, 2016), first published as Die Entdeckung der ...