We find out more about the recent Japanese translation of The Cambridge History of Canadian Literature.

You can also read this interview with editors Coral Ann Howells and Eva-Marie Kröller about the original motivations for the Cambridge History.

The Japanese version of the Cambridge History of Canadian Literature, Kemburijji-ban Kanada Bungakshi, translated by the Canadian Literary Society of Japan was finally published by Sairyusha in Tokyo in August, 2016.  The General Editors were Toshiko Tsutsumi, Takayasu Oya, Ayako Sato and, until his premature death in 2013, Yoshikazu Obata.

The editors outline the the purpose of the translation, and explain some of the challenges:

“The study of Canadian literature in Japan started in the late 1970s as a part of the activities of the interdisciplinary Japanese Association for Canadian Studies, an organization founded on the eve of the 50th anniversary of the formal diplomatic relationship between Japan and Canada. Out of this group developed a new organization devoted to literature, the Canadian Literary Society of Japan, founded in 1982. Members, all specialists in English, American, or French literatures and languages, were pioneers in the field. Our first task was to explore Canada as a country and to compare its literature to that of other countries. We frequented the library of the Canadian Embassy and familiarized ourselves with the concepts of “survival,” “garrison mentality,” and Canadian national identity.  We read works by Hugh MacLennan, Margaret Laurence, Margaret Atwood, Alice Munro, Gabrielle Roy, Anne Hébert and others, and wrote articles informing readers of our findings. We learnt of current literary theories such as feminism, post-modernism, and post-colonialism, and new names such as Michael Ondaatje, Rohinton Mistry, and Nicole Brossard were added to our reading list. 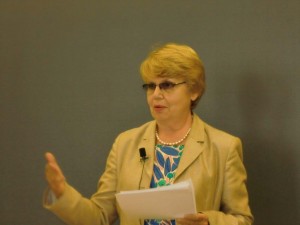 “In view of the 30th anniversary of the Literary Society expected in 2012, we started planning a translation project several years earlier, looking for a volume that would meet our purpose of further promoting the study of Canadian literature in Japan. We agreed on a literary history that would provide an overall picture of Canadian literature. The only literary history of Canada available in Japanese at the time was Clara Thomas’s Our Nature, Our Voices, first published in 1972 and translated in 1981. We considered several possibilities before, in the fall of 2009, The Cambridge History of Canadian Literature, ed. Coral Ann Howells and Eva-Marie Kröller, appeared. After careful study, we made this up-to-date scholarly work our final choice. The inclusion of French Canadian literature in this volume was also a decisive factor. The project was approved by the general meeting of the Literary Society in 2011. We invited Professors Howells and Kröller as guest speakers to our annual conference in 2012, and Professor Kröller was able to accept.

“Our original plan had been to apply for a Program Development Grant from the Canadian government, but unfortunately this program had just been discontinued. We decided to share the cost of publication among ourselves. Twenty-six members volunteered to join the undertaking, five of them taking up two chapters to cover the 31 chapters in the original. The first draft was received as early as January 2013, but the last did not arrive until January 2015. In the meantime the editors, with the help of other members of the Society, assumed the responsibility of checking each chapter, both for content and idiom.

“Standardizing the Japanese phonetic inscription of proper nouns was one of the most challenging tasks we faced, along with the standardization of the Japanese titles of the books and articles discussed in the original. For similar reasons, the detailed Index was also a worry. Should we be guided by the English or the French pronunciation of “Montreal”? For “James,” should it be “jeimuzu” or “jeemuzu”? And so on.

“The final version turned out to be a large and expensive book, but as there is no comparable volume, we expect it to be a standard purchase for Japan’s many university libraries. The Canadian Literary Society of Japan looks forward to the contribution this volume will make to the study of Canadian literature in Japan.”