The Turing test is more than mere theatre: it shows us how we humans think 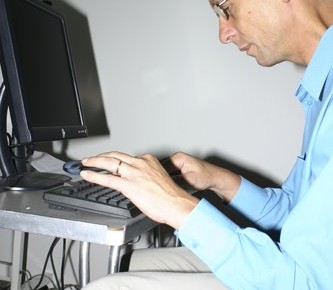 You might question why anyone bothers to stage Turing test experiments when a computer programme achieved 50% deception rate in the first instantiation, the inaugural Loebner Prize for Artificial Intelligence in 1991, which was actually a restricted question contest.

Two decades on, developer Rollo Carpenter claimed his programme Cleverbot was considered to be 59.3% human, following 1334 votes cast at a 2011 event in Guwahati, India.

For me the interest comes from movie talking robots, recently sensationally experienced in Ex Machina where the female embodied robot Ava perpetrates the ultimate deception, or does she? Well it wasn’t quite what Ava’s programmer in the movie, Nathan had imagined. And of course HAL from 2001: A Space Odyssey who talked and lip-read to a menacing end in Kubrick’s truly glorious cinematic production.

Experiencing the 13th Loebner Prize at University of Surrey in 2003 I felt tweaking that format could produce some interesting data. After all, Turing’s imitation game was as much concerned with finding out how we humans think as it is about exploring the intellectual capacity of a machine through its ability to answer any question in a satisfactory and sustained manner – Turing’s words (Computing Machinery and Intelligence, 1950).

Up to the year 2003 the method of practical Turing tests involved a human interrogator interviewing one hidden entity at a time. This is what I have named the viva voce Turing test in my PhD, ‘Deception-detection and Machine Intelligence in Practical Turing tests’. In 2008 I designed a Turing test experiment in which, for the first time, control pairs of 2machines and 2humans were embedded among pairs of human-machine set-ups. In this layout each interrogator simultaneously questioned a hidden pair and had to decide which was human and which was machine. The 2008 Turing tests were also the first time in which school pupils were given the opportunity to participate as judges and hidden humans.

The new book, ‘Turing’s Imitation Game: Conversations with the Unknown’ details that experiment and two follow up Turing test events, in 2012 at Bletchley Park held on the 100th anniversary of Alan Turing’s birth, June 23rd as part of the worldwide centenary celebrations, and at The Royal Society London in 2014, on the 60th anniversary of Turing’s untimely and sad death.

Each experiment had an incremental purpose, including to scale machine performance in dialogue and whether they were getting better at answering questions in a satisfactory manner. As readers will learn from the book, we humans do not always answer a question appropriately, so should we be harsh when machines don’t, especially as they are learning programmes and a lot ‘younger’ than some of the youngest human judges?

Implementing Turing tests is actually quite hard work. Finding open-minded human interrogators and human foils for the machines as well as motivating developers of computer programmes to participate, takes time and persuasion. Not everyone is happy at the conclusions, as can be evidenced by the many negative and angry comments across tech magazines and newspaper articles, especially after the 2014 experiment. The Turing test does this, it is one of those controversial areas of science that brings out the proprietorial impressions; everyone feels their interpretation is the one Turing intended.

I am really grateful for all the participants, humans and machine who have participated in our experiments – more than 80 judges, 70 hidden humans, and for the ingenuity, patience and collaboration of the developers: Fred Roberts for Elbot; Robby Garner for JFred-TuringHub; Rollo Carpenter for Cleverbot; Robert Medeksza for Ultra Hal, and Vladimir Veselov and his team for Eugene Goostman. You will meet these conversationalists, or chatbots in the book. I hope it encourages more school pupils and the general public to take interest in the Turing test and get involved in the challenge. There’s still more to be done here.

Turing’s Imitation Game: Conversations with the Unknown by Kevin Warwick and Huma Shah is OUT NOW.

About the Author: Huma Shah

Huma Shah is Research Fellow in the School of Computing, Electronics and Mathematics at Coventry University. She has a Ph.D. in 'Deception-detection and Machine Intelligence in Practical Turing Tests' and designed the three Turing test experiments detailed in the book. She organised the 2006 and 2008 Loebner Prize for Artificial Intelligence and co...