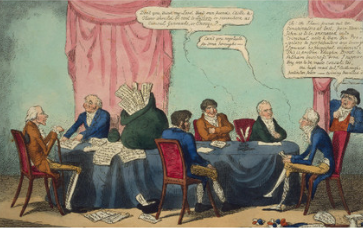 Kirsten McKenzie explores a radical new account of the legal, constitutional and administrative transformations that unfolded during the British colonial order of the 1820s.

Do individuals change history? This is the question that lies at the heart of Imperial Underworld, the story of an escaped convict who reinvented himself as a political activist with global impact. Over the past decade I have tracked a small-time lawyer turned horse thief through the archives of the most powerful men of the British imperial system. Why would such an obscure individual attract so much attention? Volatile and reckless, in life he was both reviled and celebrated. After his death, more conventional reformers (embarrassed by his scandalmongering) quickly wrote him out of the significant events in which he played a decisive role. Historians have largely followed their lead. Yet this seamy underworld was instrumental in the transformation of the British colonial order.

The early nineteenth century opened up a particular opportunity for such marginal historical actors when the British Empire sought to remake itself in the aftermath of decades of global war. Britain emerged from the Napoleonic conflict with a new and diverse set of overseas territories. Between 1819 and 1833 a series of parliamentary Commissions of Inquiry subjected a wide array of colonial possession to intensive investigation. This vast imperial stocktaking was prompted in part by growing public criticisms over reckless spending, and the system of self-interested government known as ‘Old Corruption’. It was also responding to growing humanitarian pressure over slavery and the treatment of indigenous peoples. If the declared focus was on the ostensibly dull details of administration, in practice the Commissions unleashed scandalous controversy wherever they went. They subjected almost every conceivable aspect of life to official scrutiny. Their recommendations brought forth new constitutions, legal systems and labour regimes which would affect the lives of countless imperial subjects across the world. The overall result was a highly ambiguous political landscape, a combination of repressive and liberalizing initiatives that have inspired extensive debate amongst historians seeking to categorize this moment of ‘imperial meridian’.

How are we to understand this change and the way it was brought about? The Commissioners themselves were mostly trained lawyers, the type of information-gathering bureaucrats who would increasingly typify the nineteenth-century British empire. But there were also far less conventional actors seeking a part in the unfolding drama of imperial transformation.

Imperial Underworld follows one of these actors – a small-time provincial lawyer named Alexander Loe Kaye who was transported to New South Wales in 1819 for stealing a horse. Two years later he escaped from Sydney and eventually turned up in the Cape Colony in 1823, now using the name William Edwards. Edwards set himself up as a notary but he fell foul of the Cape administration when he drew up a memorial protesting against official corruption in the assignment of liberated African slaves. Edwards then joined a loose alliance of disaffected British emigrants galvanised by the presence of Commissioners of Inquiry. More mainstream reformers regarded Edwards as a ‘desperado’. His violent and erratic behaviour made him notorious in the community. Amongst other episodes, he was implicated in a plot to smear the Governor by accusing him of “buggering Doctor Barry”, the British army surgeon whose sex remains a topic of historical debate. Many regarded Edwards (with some justification) to be insane. His actions ended with his conviction for criminal libel against the Cape governor and he was transported to New South Wales. Upon his return to Sydney in 1824, Edwards was immediately recognised as Kaye. He nonetheless continued to insist that he was Edwards, to protest against the illegality of his transportation from the Cape and lambast the injustices of the colonial systems of Australia and South Africa. He remained a thorn in the flesh of the imperial authorities and a focus for protest against the colonial administrations until he was charged with absconding and transported to the remote penal settlement of Norfolk Island in 1828. Committing suicide shortly after his arrival (the last in a series of attempts on his own life) his body was dissected by the authorities in an attempt to put the question of his identity to rest. It was hoped that bones known to be broken during the life of Alexander Kaye would be found within the corpse of the man calling himself William Edwards.

How can such a ripping yarn of daring escapes, libellous accusations and infamous ends help us explain transformations in imperial governance? My point is to show that they are in fact part of the same story. The role of marginal figures like Edwards, and the role of scandal itself, were central to these processes of social change. Where the Commissions went, scandals followed. They were inevitable flash-points for conflict – a chance for small, greedy, nascent societies to air grievances (both personal and political) and lobby for change. Their wide-ranging investigations gave space for people of all sorts and conditions to testify – from colonial governors to convicts and slaves. As they became embroiled in the backstabbing and infighting of colonial politics, critics accused the Commissioners of neglecting serious matters in favour of trivial gossip. But this is to miss the point. The reputation of both individual colonial officials and their administrations was an important resource in the cut and thrust of domestic parliamentary politics. Edwards and others like him were canny enough to hook their personal vendettas into topical questions such as slave abolition, the rights of convicts and the position of British settlers under foreign legal systems. All these questions mattered on the wider political stage and could be sold to British voters. Edwards and his scandals attracted the attention of high-ranking colonial administrations and British Members of Parliament precisely because his case could be used to further their own distinct agendas. Tracking the impact of rogue agents like Edwards can bring us to a new understanding not only of how early nineteenth-century politics and reform worked, but also of how liminal figures could play pivotal roles in large-scale historical change.

Imperial Underworld: An Escaped Convict and the Transformation of the British Colonial Order by Kirstin McKenzie

About the Author: Kirsten McKenzie

Kirsten McKenzie studied at the University of Cape Town. She completed her doctorate as a Rhodes Scholar at Magdalen College, Oxford, and joined the History Department of the University of Sydney in 2002. She employs the perspectives of cultural history to ask questions about the relationship between identity, social status and political liberties ...