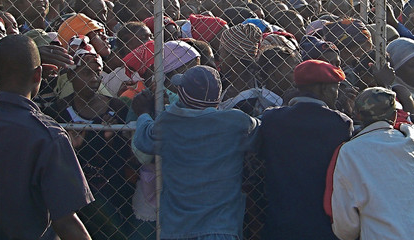 Zimbabwe’s Migrants and South Africa’s Border Farms: The Roots of Impermanence began with my interest in people’s experiences of uprootedness and settlement. At the time, the Zimbabwean-South African border was receiving a lot of press attention about ‘floods’ of migrants fleeing the Zimbabwean Crisis. I wanted to understand first-hand this displacement from migrants’ own points of view. So in 2006, I rented a car and drove around northern South Africa, visiting Musina, the border town, and Venda, the area delimited as an ethnic homeland in the apartheid era. And I drove around the farming landscapes of huge commercial estates whose farmhouses and workers’ compounds punctuate the countryside. I was introduced to farmers, workers and new arrivals along the border fence on the bank of the Limpopo River. There, I found a farm – which I call Grootplaas – where I lived for a year and a half in the workers’ compound.

A key question at the outset was the difference between migrants who crossed the border and kept moving, and those who attached themselves to places they encountered. This became inseparable from another central interest – how the dynamics of work structure life more generally. Inevitably, actually living with farm workers on the border broadened my research. Soon, the point was to develop a holistic understanding of a social world on the border, which connected white farmers and managers, and a diverse black population of recent migrants, longer-standing workers, dependents, and the border’s traders – and to read this in the context of a longer border history. The question became: how do workplaces incorporate people and shape their relationships, self-understandings and plans, in a place characterised by extreme transience?

The book begins with a story of recruitment, and recruitment provides the cover image. When the fruit and the cotton ripen on the border’s farms, the word spreads in Zimbabwe, including to Beitbridge off to the east. By first light, hundreds of people who have climbed through the razor-wire fence wait for selection to begin. The struggle for employment – getting one’s ID card to a senior worker, or getting one’s name on a list – is desperate. Meanwhile soldiers watch, not knowing whom to arrest as a border-jumper and whom to leave alone as a farm worker. On the occasion I describe, the significance of the distinction quickly became clear: as soon as the recruitment list was read, soldiers chased the remaining work-seekers into the orchards.

Why start the book like this? The scramble for employment is an important lens on the border and its farms. And it foregrounds the implications of this setting for thinking about dynamics in the region more broadly.

The Zimbabwean-South African border is a place of extreme transience, in which people make do as best they can. Large numbers of Zimbabweans cross to make ends meet in South Africa. At the same time, Zimbabweans’ search for work collides with South Africa’s high unemployment. Indeed, scholars discuss a ‘post-work political economy’ in South Africa, in which distribution trumps production. [1} But this book explores what hubs of wage labour, now far scarcer, actually do in a world of unemployment.

Being part of a workforce is about much more than an income. Incorporation into labour hierarchies roots people. This is particularly visible in a place where farms and their compounds are surrounded by an expanse of dry bush, and town is 50 kilometres away. But, more generally, it is especially pronounced in residential workforces characteristic of southern African agriculture. Even today, as white farmers present themselves as corporate businessmen and downplay older paternalist conceptions of obligation, workers’ lives are powerfully shaped by notions of responsibility and dependency within black workforces.

In the barrack-like compounds that have long shaped southern African workplaces, being a senior worker also means being a local notable, even a headman-like figure. Work supervisors at Grootplaas are football team managers and church leaders, and they are elders in a court that judges disputes. The permanence of permanent workers is provisional, as they live without security of tenure on farmers’ land. But they adapt their accommodation from bare cells into homes; become embedded in kinship and other relationships; and lay down roots for the time being on the border.

Even for seasonal workers, the incorporation that follows recruitment means that the short-termism produced by crisis gives way to the possibility of making longer-term plans. Some new arrivals have had very different former lives, as teachers or nurses for instance. They live and work with repeat seasonal labourers, including the kin, spouses and sexual partners of the almost entirely male permanent workforce. And the farms draw in a range of other dependents and fleeting visitors. This is an order created by men, and it serves men best. Yet, at the same time, the farms integrate people, albeit unequally and sometimes precariously. The border farms today invite us to think about how waged workforces structure lives more broadly amidst transience and making do. They also invite us to pay attention to a story of mobility and settlement sometimes downplayed in conceptions of southern Africa.

The figure of the labour migrant is a powerful one in the history of the region. The archetype is the mineworker – recruited at source, expected to participate in a well-understood migrant culture, and with a clear defined destination. But there is long history of people crossing borders to work in a more fragmentary manner. This has often been as a response to crisis, such as droughts and violence in southern Zimbabwe. On the Zimbabwean-South African border, crossing was on foot, not by train, and it was without documents. Plans were necessarily provisional. Archival documents from the first half of the twentieth century reveal a state unable to control movement, and licensed and unlicensed labour touts struggling over potential recruits, sometimes violently. If such mobile people have become labour migrants – evoking the remittance patterns and migrant-worker sociality of classic migration scholarship – they have done so at their places of work. Today, as in the past, hubs of capitalist production draw together diverse people on the border, organising space, shaping lives in the present through workforce arrangements, and thereby also influencing possibilities for the future in a place of crisis.

[1] See for example James Ferguson, Give a Man a Fish: Reflections on the New Politics of Distribution (Durham, Duke University Press, 2015).

Zimbabwe’s Migrants and South Africa’s Border Farms: The Roots of Impermanence  by Maxim Bolt is out now

About the Author: Maxim Bolt

Maxim Bolt is Lecturer in Anthropology and African Studies at the University of Birmingham and a Research Associate at the Wits Institute for Social and Economic Research (WISER), University of the Witwatersrand. His doctoral thesis, on whose research this monograph draws, was awarded runner-up in the biennial Audrey Richards Prize by the African S...