FifteenEightyFour has been discussing music with author John MacAuslan. In his fourth and final article, MacAuslan explores four very different and distinct works of Schumann.

The first three articles can be read here.

They’re strikingly different from one another. And if there was a rule or expectation, Schumann would upend it. Not from wilfulness: in each case, it’s creative and revelatory.

Schumann said of his 1835-37 Carnaval that it ‘shows the whole crazy business of the carnival of the imagination’.

Its ordering principle is disorder, its centre the centrifugal.

Its famous Sphinxes are a carnivalesque inversion of traditional thematic development. They show no progressive thematic transformation or development, no deeper unity in surface diversity. They just sit on varied themes, parading a static surface uniformity on top of those themes’ underlying diversity: fixed masks on top of individual, mobile faces.

Heine said of that tale, ‘if it doesn’t make your head spin, you have no head’. You could say the same of Carnaval.

Then in 1837, Fantasiestücke gives a surprising role to sonority as a unifying principle; in Kreisleriana, of 1838, it’s tonality that gets radical treatment.

In reviews written in 1837, he lambasted the rondos of his day, issued in industrial quantities:

‘boxed between two planks, one stands at the end of the world, and can move neither forward nor backward’,

‘moving in a small circle of thoughts’.

Surely, then, he would not write such rondos himself? But he did.

All four pieces in his Nachtstücke are rondos; in the first three, the refrains are thematically austere and rhythmically hard-edged.

There are block chords in largely parallel movement. The repetitions are rigidly unvarying.

There’s virtually no responsiveness between episodes and refrain.

It’s as though he wanted to express in music what a German novel of fifty years before (by Moritz) had described.

Its hero felt in a ‘labyrinth’ out of which he ‘finds no way’, his thoughts ‘turning in a circle’, ‘fixated and confined within himself’;

in a scene called a ‘Nachtstück’, he tramps obsessively in the gloom to a churchyard:

behind this was nothing further – here was the nailed-up plank wall’. 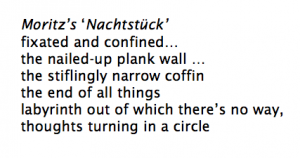 Rigid rondo form may be contemptibly limited; but exactly the same properties in it might also make for a compelling work.