Have Fishes Had Their Chips?

Julian D. Olden, Author of Conservation of Freshwater Fishes, talks about the enormity of the challenges we face and how this book will inspire both current and future generations of scientists. 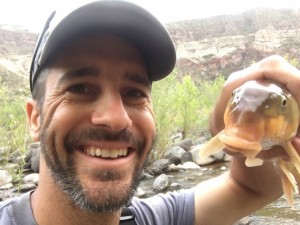 Simply put – I squeeze fish for a living. Okay, this is not entirely true, but being a freshwater ecologist has provided the opportunity to see (and hold) a lot of cool fish in my years. Although there is nothing else I would rather be doing, I can tell you that studying fish is also very sobering at times. Think about it – the human enterprise is nothing short of gigantic, and as a result freshwaters are being hammered by a lethal cocktail of threats, including habitat loss and modification, dams and fragmentation, climate change, overexploitation, pollution and the spread of invasive species. It is quite telling that humans now use over half the available freshwater from our rivers, reservoirs trap a quarter of the global sediment load before it reaches the oceans, river systems have been fragmented by over one million dams globally, and many waters are polluted and their fisheries persistently over-harvested. The damage of these and many other insults is that freshwater fishes are among the most imperiled group of species worldwide. Sobering indeed.

So this raises the question: have fishes had their chips? 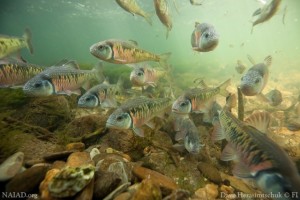 So this raises the question: have fishes had their chips? Well, in a just published book Conservation of Freshwater Fishes, I’m pleased to say that scientists from around the world respond with an empathetic and resounding “No”! Despite the enormity of the challenge, the pages of this book speak to hope and not despair. From innovative aquaculture strategies to ripping down dams or controlling invasive species to conserve fish species, no matter how daunting the prospects, the Blue Planet crisis merely provides more opportunities for success.

I can honestly say that the writings in this book inspire both current and future generations of scientists to roll-up their sleeves and get to work to ensure a sustainable future for our freshwater fishes.

About the Author: Julian D. Olden

Julian D. Olden, author of Conservation of Freshwater Fishes is H. Mason Keeler Endowed Professor in the School of Aquatic and Fishery Sciences, University of Washington, and Adjunct Research Fello...