In the second in a four week series, author John MacAuslan, author of Schumann’s Music and E. T. A. Hoffmann’s Fiction, enjoys the work of Adolf von Menzel. Last week, he examined how Schumann’s Kreisleriana works.

In 1838,Schumann  wrote to a friend of his ‘fairly lonely path’, on which ‘a real companion in art is a rarity’, and ‘only my great predecessors Bach and Beethoven look on me from afar and offer support’.

I’m grateful to the Museum Oskar Reinhart in Switzerland for their kind permission to use a wonderful drawing by Adolph von Menzel on the cover of Schumann’s Music and E. T. A. Hoffmann’s Fiction.

The picture is of Menzel’s brother-in-law at the piano. A bust, probably Beethoven, looks down on the scene. Light streams in. The lofty ceiling seems alive with echoing music. There’s nobody else –just two empty chairs, two presences that might have been. 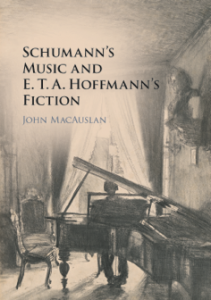 Menzel is for me one of the under-appreciated greats. Born five years after Schumann, whom he never knew personally, he outlived him by fifty.

In 1854, he sketched Schumann’s youthful, flamboyant protégé, Joseph Joachim, playing his violin while Clara peers carefully at a score at the piano.

Did Menzel fill a gap in Brahms’ life – a gap left perhaps by his increasing distance from the incomparable Elisabeth von Herzogenberg, and her death in 1892?

Imagine Brahms and Menzel in Berlin, with a bottle of champagne, surrounded by pictures, finished, unfinished, or reworked, and the paraphernalia of an artist’s studio – talking late into the night of history, of politics, of the rising xenophobia both saw with distaste, and of art.

Imagine Brahms in Vienna playing for Menzel his late piano works, such as the C# minor Intermezzo from op. 117, with its prevailing darkness and gleams of unexpected light.

Better still, go to the Museum Oskar Reinhart in Winterthur, and enjoy its pictures.

If you’re a Londoner, you may remember them from the National Gallery’s 1994 exhibition. And go to Berlin to see the astonishing paintings Menzel did in the 1840s, foreshadowings of much later painting styles.