The Battle of Jutland: British opportunities missed – An article by John Brooks 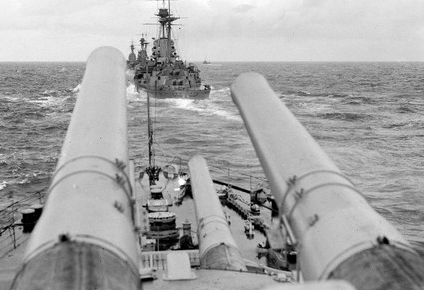 To mark the centenary of, The Battle of Jutland, one of the most important and controversial naval battles in history, author and military historian John Brooks reflects on the devastating consequences of tactical failure by British commanders.

The Battle of Jutland (in Germany, of the Skagerrak) was fought on 31 May and 1 June 1916. It was the only fleet encounter of World War I, with 151 British and 99 German warships present. The battle ended with the British Grand Fleet still dominant in the North Sea and with the German High Seas Fleet retreating to its bases. But the price of this strategic victory had been no less than a tactical defeat. British and German casualties were, respectively, 6,768 and 3,058 killed and wounded, while the Royal Navy lost six major warships, Germany only two. This disparity is partly explained by the greater tendency for fires in the British gun propellant, cordite, to develop into catastrophic magazine explosions. But why was the British fleet unable to inflict greater losses on its weaker opponent?

Throughout the battle British commanders (knowingly or not) missed opportunities to inflict more damage on enemy ships, to limit losses to their own ship, or even both at once. At the start, when the opposing scouting forces sighted each other, Vice-Admiral Beatty led six battlecruisers and four fast battleships against Vice-Admiral Hipper’s five battlecruisers. (Battlecruisers had a battleship armament but their greater speed, particularly in some British classes, was obtained by sacrificing armour protection.) By engaging with only his six battlecruisers, Beatty lost the opportunity to overwhelm his opponent; furthermore, his tactical leadership compromised his ships’ gunnery. During what is called the ‘Run to the South’, he twice lost gunnery superiority and both Indefatigable and Queen Mary were destroyed by cordite explosions. Beatty then encountered the advancing German High Seas Fleet under the command of Vice-Admiral Scheer; Beatty’s duty was then to lead the enemy forces Northward towards the British Grand Fleet commanded by Admiral Jellicoe. In this ‘Run to the North’, the four fast battleships, due to delayed turns, were trailing about three miles astern of Beatty’s battlecruisers. But the latter dropped out of action for almost twenty-five minutes; if they had continued to engage the German battlecruisers, the battleships would have had the opportunity to inflict more damage on the pursuing German battleships, while suffering fewer hits than they actually received. Later in the battle, Beatty twice rejected opportunities to pursue the German battlecruisers when they were vulnerable; a few more hits could well have been enough to cause Seydlitz as well as Lützow to sink.

A squadron of three British battlecruisers, led by Rear-Admiral Hood, had started out with the Grand Fleet but Jellicoe had ordered them ahead to rejoin Beatty, leaving only a line of obsolescent armoured cruisers as the Grand Fleet’s advanced force. When the battlefleets met, Jellicoe, with little information about the enemy, made the best possible deployment of his fleet into single line. But the unintended consequence of his order to Hood was that the armoured cruisers commanded by Rear-Admiral Arbuthnot were caught between the battle lines, his flagship Defence blowing up and Warrior sinking later. Hood’s flagship Invincible was also destroyed by a magazine explosion at the end of a brief action with Hipper. After his successful deployment, Jellicoe’s long-standing concerns about attacks with mines and torpedoes discouraged him from pressing home his advantages, while the hesitant leadership of the line by Vice-Admiral Jerram created more tactical problems. With attacking German flotillas a clear threat, at least to Jellicoe’s rear squadron, he elected to turn all his squadrons away; this, together with Scheer’s rapid withdrawal into the mist, broke contact between the two battlefleets for good. During the night, Jellicoe undoubtedly misjudged Scheer’s movements but, if they had met near Horns Reef at dawn, it is far from certain who would have inflicted the greater damage.

Of the British destroyer commanders, just after Jellicoe’s turn-away Commodore (Flotillas) Hawksley attacked, though with only a half-flotilla, but he was peremptorily recalled by Jellicoe before he found the disorganised enemy. After this reprimand, Hawksley twice failed to take attacking opportunities although, on the second occasion at dusk, Jerram’s confused orders must also have undermined his determination. During the night, even after the initial costly attacks by British flotillas, three more flotillas were well-placed for a massed attack from ahead on the advancing German line; regrettably, this promising concentration was disrupted when Captain Farie suddenly turned his 13th Flotilla sharply away from the enemy. The sinking at dawn of the German predreadnought Pommern in the attack by Commander Stirling’s 12th Flotilla shows what might have been accomplished if Farie had held his position.

The Battle of Jutland by John Brooks is out now.

About the Author: John Brooks

Dr John Brooks published his first historical paper on circular dividing engines in 1992. His 2001 doctoral thesis was the basis of his book Dreadnought Gunnery and the Battle of Jutland: The Question of Fire Control (2005), which was the first work to challenge the then widely accepted views of 'revisionist' naval historians. Dr Brooks has also pu...