George Herbert – A poem a day: ‘The Collar’ 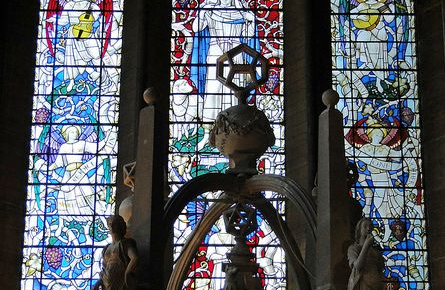 To celebrate the publication of George Herbert: 100 Poems, we ask volume editor Helen Wilcox to pick her favourite George Herbert poems and explain why she chose them.

This is Herbert’s most rebellious poem, and a reminder that his work encompasses not only the joys but also the difficulties of the human relationship with God. The speaker is bursting with frustration and begins with a dramatic action: ‘I struck the board’. Bearing in mind the context of the poem – part of a sequence entitled ‘The Church’ – this is a potentially blasphemous gesture, a fist slamming on the altar, the Lord’s own table. The angry speaker has had enough of what feels like enslavement to God, and the poem unfolds in an expressively unruly way: its form is deliberately disjointed, with lines and arguments tumbling out wildly in a rush of furious resentment. As is typical of Herbert, the title is packed with meaning and reveals the complexity of the poem. It suggests the restraining ‘collar’ or yoke against which the speaker is protesting, and, punningly, the ‘choler’ or anger with which the complaint against God is being made. In the word ‘collar’ we can also hear ‘caller’, highlighting the fact that the poem contains the cry of the believer who wants ‘No more’ but, in addition, includes the voice of God, intervening in the drama by simply calling out ‘Childe’. The last four lines of this poem are almost as unpredictable as its opening. With one loving word from God, the overwhelming human anger dissipates. The speaker’s response, ‘My Lord’, not only re-establishes relationship with God but also restores the poem’s rhyme scheme as a symbolic expression of rediscovered harmony. In Herbert’s work, a poem’s form is nearly always integral to its meaning. Here, the wayward lines of rebellious discontent, scattered over the page, are replaced in the conclusion by the simple, ordered beauty of rhythm and rhyme. Art and spirituality, questioning and faith, the human and the divine, conclude the poem hand in hand.

About the Author: Helen Wilcox

Helen Wilcox is Professor of English Literature at Bangor University. She is the editor of the critically acclaimed edition of The English Poems of George Herbert, published by Cambridge University Press in 2007....