A Glimpse into High Speed Marine Craft: One Hundred Knots at Sea 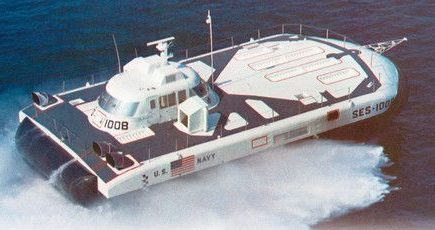 What is this Book About?

This book is a unique combination of both the history and the technological development of designing high speed ships for both commercial and military use on the high seas of the world.  It specifically tracks the development of the US Navy efforts to design a large ship capable of sustained speeds more than 3 to 4 times the speed of current ships while being able to safely conduct military missions.  The technologies involved strained the technology base in hydrodynamics, aerodynamics, and structural design and propulsion mechanisms; all detailed in the book.  In addition to the chapters on the historical developments, milestones and programmatics, there are many chapters detailing the engineering principles, theories, corroborating test results and unique mathematical developments in all the principal areas of engineering design.

Why the Subtitle: One Hundred Knots at Sea?

The technology behind conventional ships as used today in navy fleets and commercial use is strained when extrapolating much beyond todays’ speeds of 25 – 50 knots.  To be militarily useful, speeds approaching 100 knots are required for which there was no reliable data base.  As one example, the hydrodynamics and propulsion mechanisms in the supercavitating flow regime incurred by such high speeds strained the state-of-the-art and this book documents the intense research that was required to achieve success.

What is Unique about this Book?

Who is this Book for?

The book provides a textbook that can be used in academic institutions for the teaching of engineering courses in high speed ship design where both hydrodynamic and aerodynamic forces dominate the ship features.  Its emphasis is on those craft that use the air cushion for support, both in their aerostatic form and in their aerodynamic form.  Many different examples are given in the book but generally the aerostatic form encompasses those craft known as hovercraft and surface effect ships; and the aerodynamic form encompasses those craft known as wing-in-ground-effect and ekranoplan craft. There are other variants and concepts covered in the book.

The book contains many original theories substantiated by a data-rich experimental base from many independent sources, accompanied by design rules for engineering use by craft designers and academicians alike.  The book is also designed to help those involved in the management of technically difficult projects to ensure that management and peer reviews, decision milestones and risk reduction techniques are properly followed.

About the Author: Peter J. Mantle