The book as performance: Shakespeare and the book arts today

Shakespeare’s works have provided fertile ground for reimagining the nature of the book, from illustration, to typography, to format, to binding, to other aspects of physical form. The various forms of books have shaped our experience of Shakespeare, and so, in turn, have Shakespeare’s works influenced the forms that books have taken. That mutual relationship between mediation and imagination can be seen in the examples below, drawn from an ongoing exhibition at the University of Toronto’s Thomas Fisher Rare Book Library, titled “So Long Lives This: a Celebration of Shakespeare’s Life and Works” (which I co-curated along with Peter Blayney, Marjorie Rubright, and lead curator Scott Schofield). 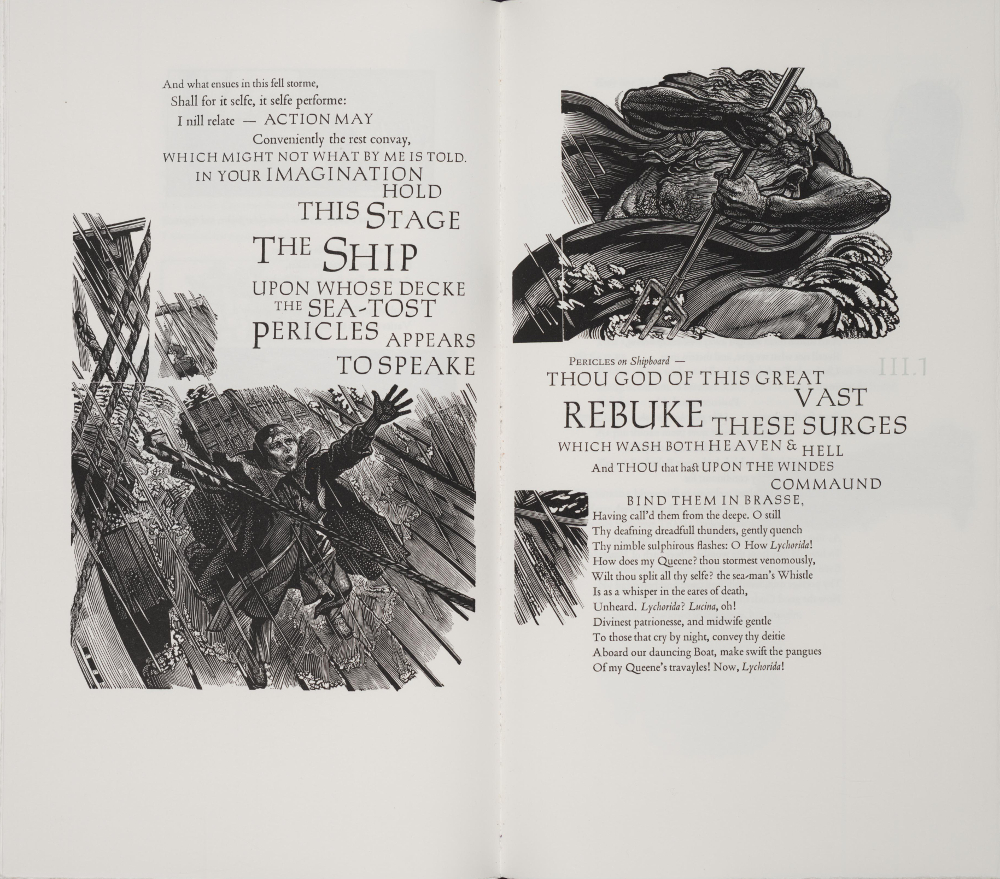 The book itself becomes a performance in a remarkable edition of Pericles published in 2011 by the Barbarian Press, based in Mission, British Columbia, and operated by Crispin and Jan Elsted. Combining the editing and design talents of co-proprietor Crispin Elsted, calligraphy by Andrea Taylor, bindings by Hélène Francoeur, and over one hundred illustrations by Simon Brett, this remarkable book shows what can be accomplished by a small press working with quality materials and an adventurous approach. Yet Pericles is hardly an obvious choice for an expensive artists’ book in a limited run. This late romance set in the Mediterranean presents any modern re-interpreter with real challenges: a corrupt text with numerous errors; a plot dependent on providential coincidences; an episodic romance structure with mostly flat, conventional characters in lieu of psychological realism; a reputation as one of Shakespeare’s lesser plays, written as a late-career collaboration with another dramatist; its omission (possibly on the same grounds) from the first great bibliographical instantiation of the Shakespeare canon, the 1623 First Folio; and a lack of a continuous, high-profile stage tradition on the scale of Hamlet, Macbeth, A Midsummer Night’s Dream, or even its more admired late-romance counterpart, The Tempest. Today, Pericles is a tough sell.

Yet in the words of the play’s chorus, John Gower—the medieval author who supplies the story via his retelling of the legend of Apollonius of Tyre—the volume brings several of the book arts together ‘To sing a song that old was sung.’ Brett’s illustrations, in particular, evoke many of the conventions of modern graphic novels, and make brilliant use of the technique of wood engraving in service of visual storytelling. As Brett comments in the edition’s companion volume of essays and notes,

‘What is an illustrated book? … [A]few plates scattered between the pages of a book hardly engage the text at all, however artistic they may be. What the perfect balance—the ‘fully’ illustrated book—may be, nags at every illustrator’s mind. A play ‘acted out’ on the page is an answer, bringing to life the silences, illustrating the dumb shows, articulating the voyages.’

For these and other reasons, the Barbarian Press Pericles has been recognized as an achievement in modern Canadian printing, winning awards from the Alcuin Society and the Oxford Fine Press Book Fair. 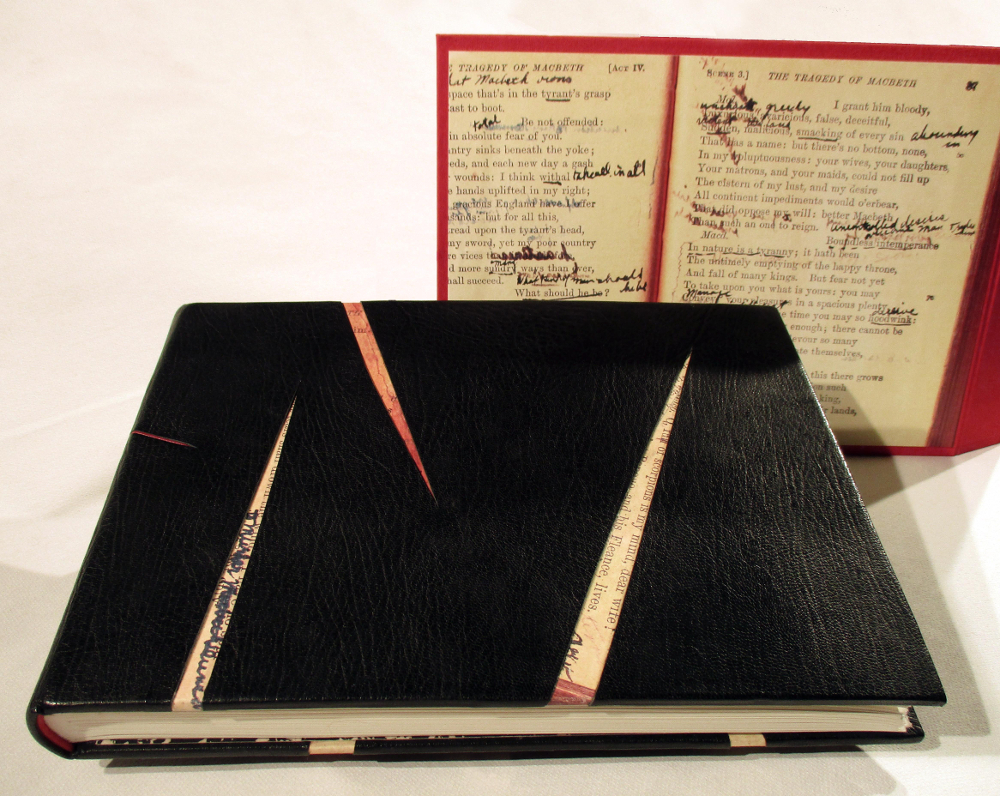 The binding of a book can be integral to the story it tells as a physical artifact. Shown here is a binding made by Toronto book artist Don Taylor for Illustrations for ‘Macbeth’, published in 2012 by Toronto’s Pointyhead Press. This beautiful yet enigmatic volume pairs quotations from the play with haunting illustrations by one ‘Dechard Rinderpest,’ the pseudonym of a local actor who, according to the book’s preface, had his career cut tragically short due to psychological trauma combined with a head injury sustained while playing Lady Macbeth. As the preface describes,

‘It was during Mr. Rinderpest’s long rehabilitation that he began work on a large body of illustrations for ‘Macbeth,’ dispelling his demons through dark imaginings of scenes and personalities in this violent and bloody tragedy. Quotations from the play were rendered in pen and ink or palette knife and finger paint on a sheet of glass and monoprinted onto cheap Chinese calligraphy paper. A sadly deteriorated copy of the MacMillan Co. Pocket Classic edition of 1922, found among his personal affects, reflects the intensity of feeling that he brought to this project. The results are messy and disturbing, surely indicative of the artist’s mental state.’

(There are reasons to suspect that the story told in this book’s preface is not entirely serious—except about the genuine talent reflected in these illustrations.) Taylor’s binding takes images of Rinderpest’s 1922 MacMillan edition of Macbeth, apparently annotated in his anxious hand, and covers them with black leather and red highlights—but slashed diagonally in places, as though by a murderer’s dagger. Like the violence done to various bodies throughout Macbeth, the cuts in Taylor’s binding reveal a traumatic history just below the surface, with the annotated pages of Rinderpest’s own edition showing through these unclosed bibliographic wounds.

Another talented Toronto bookbinder, Robert Wu, creates art bookbindings that not only enclose and protect old books, but also reinterpret their themes and visual motifs. Wu’s 2012 binding of A Midsummer Night’s Dream is no exception, and boasts a full French binding with a chemise, slipcase, opal inlays and onlays, and hand-marbled paper. The design concept, as Wu describes it on his blog, is that ‘the viewer peeks through the bushes into the night sky and sees fairies frolic around the ribbons.’

Wu’s volume also embodies the theme of Shakespearean reinvention by re-binding a 1914 edition illustrated by the great English cartoonist W. Heath Robinson. The tiny figures that adorn Wu’s binding are taken individually from several of the 1914 illustrations. Wu has arranged them to echo Robinson’s visual motif of a mob of fairies tumbling into the frame, spreading magic and mischief behind the scenes of ordinary human affairs.

As these few examples show, the form of the Shakespearean book does not stand still, but changes in concert with our own understanding of Shakespeare, literature, and the relation between past and present. That theme is developed in my own book, The Shakespearean Archive, and in the exhibition “So Long Lives This,” which runs until the end of May, 2016 at the Fisher Library in Toronto.

To win Shakespeare and the Eighteenth-Century Novel enter our daily Shakespeare giveaway, Much Ado About Winning – www.cambridge.org/shakespearewin

About the Author: Alan Galey

Alan Galey is Associate Professor in the Faculty of Information at the University of Toronto. His research focuses on intersections between textual scholarship and digital technologies. He has published in journals such as Shakespeare Quarterly and Archival Science, and his article ‘The Enkindling Reciter: E-Books in the Bibliographical Imaginati...