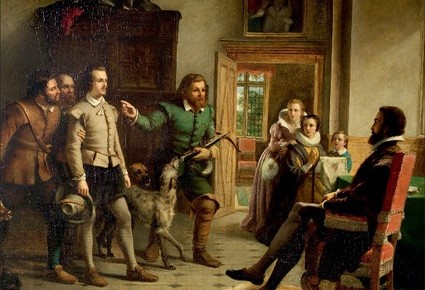 Paul Franssen explores what Shakespeare's take on current world issues such as war might have been if he were still here today...

In the on-going European refugee crisis, Shakespeare recently made a posthumous intervention. On 31 January 2016, my colleague Ton Hoenselaars teamed up with our student Anne Boeschoten, to speak on Dutch national Radio about Shakespeare’s presumed contribution to Sir Thomas More, the lines in which More speaks up on behalf of refugees. Soon Shakespeare will again be asked to testify on a topical issue: the rights and wrongs of war. On 24 April, Theodore Meron, president of the Mechanism for International Criminal Tribunals, will deliver a keynote lecture on Shakespeare and Just War, during a commemorative event in honour of Shakespeare in the Hague. A number of people working with Shakespeare in various fields will respond to Meron’s ideas. In Dutch theatre, too, Shakespeare is frequently linked to topical concerns. Two years ago, Zuidelijk Toneel brought a production of Julius Caesar that reflected on the radicalisation of popular culture (symbolised by drum bands) and the rise of populism in modern society. This year, they are staging Macbeth, with a childless protagonist loosely modelled on the Chief of Defence Peter van Uhm, whose son was killed in action in Afghanistan in 2008. I have yet to see this production, but it shows once again that Shakespeare’s works are far from museum pieces for modern-day directors: they see them as useful ways of confronting the issues that beset the modern world. My examples all hail from my home country, the Netherlands, but I am sure that similar instances could be mustered from around the globe.

What would Shakespeare himself have thought about such uses of his authority? In the final chapter of my book on Shakespeare’s Literary Lives, I discuss the genre of time travel fantasies, in which modern people confront Shakespeare directly with contemporary concerns and questions. Usually Shakespeare is surprised, even angry, at the ways in which his works are read and staged in later times. As for the issue of refugees, it is quite possible that, if he were put on the spot, he would disapprove of allowing people of different cultural backgrounds and faiths into the country. Clearly, we cannot ask Shakespeare for his opinion on such issues that are far beyond his imagination. All we can do is extrapolate from his work, and surmise what he might have thought if he had had our cultural background. The openness of his dramatic works, in which the author disappears and leaves the stage to his characters, allowing them to speak for themselves, also extends to the issues of a future that Shakespeare could have had no conception of.

At the same time, this availability for reinterpretation and appropriation, which Terence Hawkes has so memorably termed “meaning by Shakespeare”,  also leaves the door open to groups with unsavoury ideologies: the Nazis, who adapted the Merchant of Venice into a vehicle for anti-semitic propaganda,  or the slave owners who applauded stagings of Othello that are unacceptably racist to modern sensibilities. Shakespeare may be our hero, but he is also every man’s hero.

About the Author: Paul Franssen

Paul Franssen teaches English Literature at the University of Utrecht. He has co-edited several volumes, including The Author as Character (with A. J. Hoenselaars, 1999), Shakespeare and War (with Ros King, 2008) and Shakespeare and European Politics (with Dirk Delabastita and Jozef de Vos, 2008). He has also published numerous articles on Shakespe...