Last weekend Shakespeare was certainly the most famous person on the planet, even more so than the Queen, Prince and President Obama.

If you got as far as 23rd April without realising it was the 400th anniversary of Shakespeare’s death, you deserve to be woken as I was in Stratford-upon-Avon at 6am that morning by a loud brass band performing a celebratory jazz funeral.  In the garden opposite my hotel room the first of many BBC interviews within the freshly-excavated grounds of Shakespeare’s second Stratford home, New Place, had started.

By 10am Amy Watson and I were in place with our CUP Shakespeare banner, sprigs of rosemary, posies of flowers and New Orleans bling (to go along with the Jazz Funeral theme), ready to hoist aloft a CUP flag and to process in stately fashion through the town behind the Stratford mayor and dignitaries, members of the RSC and Birthplace Trust, guilds of fruiterers and glovers, schoolchildren, brownies and cadets, watched by just about everyone else in the west midlands.

The solemn tolling of a bell announced the start of proceedings. 2016 was the anniversary of Shakespeare’s death, after all, whereas the annual event generally celebrates the birth, conveniently said to be the same date. Next, the head boy from King Edward’s – Shakespeare’s school – appeared on the dais nearby to lead the long march to Holy Trinity Church, where Shakespeare is buried. The ritual involves the boy carrying a quill pen from the Birthplace through the town and placing it in the hand of the famous effigy which overlooks the chancel. Each member of the parade then places a posy of flowers on the tomb below.

By this stage the parade had lost something of its solemnity and the New Orleans jazz funeral element took over (jazz funerals are said to be a way of celebrating and commemorating a life well lived, and seemed the perfect fit for this year). The Tulane saxophones competed with the naval brass band, followed by a stiletto-heeled , parasol-waving- troupe, Indian and Chinese dancers, Elizabethan country ladies and the inevitable Morris Men waving their hankies. Amy and I tossed our New Orleans bling and smiled radiantly, proudly presenting the Press banner (which you can see in this photo with myself and Amy alongside author Stanley Wells). 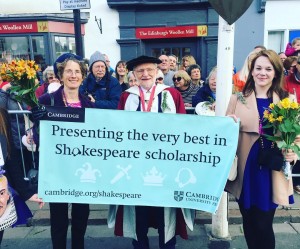