It should not be a big surprise that over at Cambridge University Press, we love Shakespeare on both sides of the ocean!

We asked our staff:

What is your favorite Shakespeare play…and why?

My favorite works of Shakespeare are King Lear and Macbeth. King Lear, for me, is the greatest artistic confrontation with the indifference of the universe by any artist, living or dead. Macbeth I love for its portrayal of human ambition and the hunger for power. I have part of Lady Macbeth’s famous words tattooed on my forearm: “My hands are of your color, but I shame to wear a heart so white.” 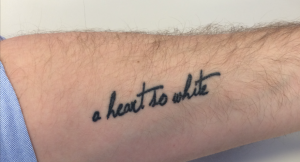 Morten Jensen of our New York City office knows Macbeth like the back of his hand (or the front of his arm).

I love A Midsummer Night’s Dream.  My first big production of my own was a play that I was trying to model after it. The last scene in my play involved a magical scarf (no, really, a magical scarf) causing the characters to all fall love with the wrong match. One of the reviews we got for that play loved everything about the play except for the ridiculous “magical scarf motif.” I promptly rewrote the ending and realized that some things we have to leave to Shakespeare. 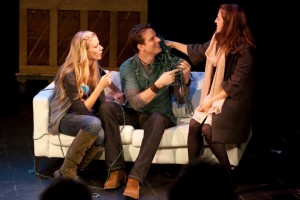 Diana Rissetto’s play Pigeons, Knishes and Rockettes was inspired by A Midsummer Night’s Dream and used magical scarves instead of fairy magic.

My favorite Shakespeare play is The Tragedy of Hamlet, Prince of Denmark. Hamlet’s inner turmoil, mirrored by his acts of craziness shows his confusion and heartache. This would not be as powerful be it not for Ophelia, who is caught between her father, Polonius who misinterprets Hamlet’s actions and forces Ophelia to oblige, and Hamlet who seems to care for Ophelia but is caught up in his charade in order to avenge his father’s death. Interesting still, Hamlet does not kill himself, though he talks about it. It is Ophelia who ends her life, and Hamlet dies honorably. This play has everything one could want: ghosts, betrayal, love (of family), mystery, and friendship.

My favourite Shakespeare play is Othello. I studied Othello both at GCSE level and for my English Literature degree, and on one particular occasion I remember being in my 9am Shakespeare lecture and having the world of Othello brought vividly to life by my lecturer at the time, Ewan Fernie. His own passion and enthusiasm really made Shakespeare’s play come alive, and I can still picture him now spitting the words ‘EVEN NOW, NOW, VERY NOW, AN OLD BLACK RAM IS TUPPING YOUR WHITE EWE’ to a packed lecture theatre. More recently, I saw a National Theatre production of Othello with Adrian Lester and Rory Kinnear. The play was set in a British military base in Cyprus, and I think this clever staging really helped to capture the audience’s imagination and bring the play up-to-date. Othello is about passion, jealousy and betrayal – and whilst the words may have been written over 400 years ago – for me it’s striking moments in the play’s performance that keeps it fresh and open to new adaptation and interpretation-

My favourite Shakespeare play is Romeo and Juliet, which is entirely down to Baz Luhrmann’s incredible adaptation!

Leo was Romeo in blue jeans in 1996 and we haven’t stopped swooning since.

Much Ado About Nothing. The play is so rich and open to interpretation.  I have seen two fantastic productions in recent years, which have both done such different things with Shakespeare’s material. I saw the Globe Theatre on Tour give a fantastic performance outdoors in the gardens of Corpus Christi College, Cambridge, with Emma Pallant as Beatrice and Simon Bubb as Benedick, which really brought out the comedy at its most riotous and slapstick.  I have never laughed so much in public (despite being huddled under a plastic bag in the rain!) At the Royal Shakespeare Company, on the other hand, Christopher Luscombe’s fantastic re-imagination of Much Ado as the (lost) Love’s Labour’s Won managed to introduce tragic elements where I had never noticed them before.  In particular, Nick Haverson’s Dogberry had me weeping, and the post-World War One setting casts a dark shadow across even the funniest moments (though Michelle Terry and Edward Bennett as Beatrice and Benedick still had me in stitches – especially the two eavesdropping scenes in II.3 and III.1)-

The ending of the Branaugh and Thompson Much Ado About Nothing was pretty dreamy.

Throughout 2016 we are marking the 400th anniversary of the death of William Shakespeare by following key themes, controversies and research relating to the life and legacy of the man himself.

This month we’re celebrating Shakespeare’s legacy and each day running from 1st to 23rd April we will be giving away a different prize for FREE from Cambridge University Press’s fantastic range of Shakespeare books!

To enter our prize draw simply fill in your details on the form below to be in with a chance of winning! www.cambridge.org/shakespearewin

As we celebrate Shakespeare’s legacy throughout April we really want to know what Shakespeare means to you, and why his work still matters 400 years after his death. Join the conversation by commenting here on our blog or tweet us using @CambShakespeare – we’d love to know your thoughts!