Ellen Johnson Sirleaf Paved the Way for Hillary Clinton and Others 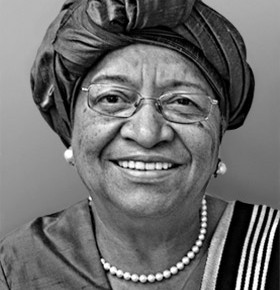 As the United States faces the possibility of having its first woman President, Iris Berger discusses the President of Liberia, Ellen Johnson Sirleaf.

If Hillary Clinton receives the Democratic nomination for President in 2016, she will be the first woman nominee for the nation’s highest office from a major party, but hardly the first woman candidate for the position.  Two women ran for President on the Equal Rights Party ticket in the late nineteenth century – Victoria Claflin Woodhull in 1872 and Belva Ann Bennett Lockwood in 1884 and 1888. But only in 1964 did a woman, Margaret Chase Smith, have her name placed in nomination by a major party. Since then eight women have sought the nomination on major party ballots. But smaller parties, among them the American Woman’s Party, the Communist Party, the Socialist Workers Party, the Green Party and tiny idiosyncratic groups such as the Looking Back Party have fielded more than thirty women for the country’s highest office. Equally under-represented in Congress, women now make up 20 percent of members of the Senate and 19.3 percent of the House of Representatives in 2015.

Most Americans are unaware that this record compares unfavorably with that of other countries – not only in Western Europe – but also in Africa, a continent we often associate with women’s oppression. Indeed, in global comparisons of women’s representation in the lower or single House, the U.S. ranks 95th – far behind Rwanda, with 63.8 % women (the highest in the world) and Senegal, South Africa, Namibia, Mozambique, and Ethiopia – all in the top twenty.  Also ahead of the U.S. are fifteen other African countries. If Hillary Clinton is elected, she will take her place alongside Ellen Johnson Sirleaf, who has been President of Liberia since 2006. In 2011, Johnson Sirleaf became the first female leader ever to receive the Nobel Peace Prize.

Born in Liberia, a country founded in 1847 by freed slaves from the U.S., Johnson Sirleaf married at seventeen and had four sons. Travelling with her family to the U.S., she studied at Madison Business College in Wisconsin before receiving a degree in economics from the University of Colorado at Boulder and a master’s degree in Public Administration from the Kennedy School of Government at Harvard University. Returning to Liberia she was hired at the Treasury and became Assistant Minister of Finance in the government of President William Tolbert, whose party represented the elite descendants of the country’s founders. When he was overthrown by Samuel Doe in 1980, Johnson Sirleaf went into exile in Kenya and the United States, working in international banking, but returned to Liberia in 1985 and ran for a seat in the Senate. Increasingly outspoken against Doe’s brutality and corruption, Johnson Sirleaf was sentenced to ten years in prison and threatened with rape and death. Released after serving a partial sentence, she fled the country once again and moved to Washington, D.C., but remained connected with events at home as civil war tore the country apart. When Johnson Sirleaf returned to her country for a third time in 1997, she ran unsuccessfully for President, but reentered the race in 2005. Campaigning aggressively and successfully against international football star George Weah, she promised economic development and an end to civil war and corruption. At her inauguration, she became the first elected woman President on the African continent.

Liberia was unique in having a well-qualified woman candidate run for the presidency in the wake of civil war. But elsewhere in Africa as well women positioned themselves to take advantage of local and international pressures for democratic constitutions and multi-party elections during the 1990s and early twenty-first century. In the post-conflict reorganization of government that took place from South Africa, Namibia, Mozambique, and Uganda to Sierra Leone, Liberia, and Eritrea, women banded together to insure that their voices were not silenced in the new political systems. Pioneered by South Africa after the historic elections that ended apartheid in 1994, one of their chief tactics was to demand greater parity between women and men in law-making bodies by setting quotas for women’s representation in national (and sometimes regional and local) legislatures. These demands were particularly successful in countries that had emerged from civil strife since the mid-1980s, opening up spaces for political activists to push for political and constitutional frameworks that reflected contemporary concerns for protecting women’s rights.

By the end of the first decade of the twenty-first century, women across the continent were moving into leadership positions in political parties, legislatures, NGOs, and other voluntary organizations and actively challenging discriminatory legislation and constitutions. Women in many countries also were debating and implementing the most effective ways to integrate advocacy for women into government programs, including such measures as gender budgets, an effort (initially adopted from Australia) to clarify the implications for women of government resource allocation and spending.

My book Women in Twentieth-Century Africa explores the paradox in the conflicting images of African women – as singularly oppressed and dominated by men, but also as strong, resourceful, and willing to challenge governments and local traditions to protect themselves and their families.

About the Author: Iris Berger

Iris Berger is Professor of History, Emerita at the State University of New York, Albany....

Climate Activism at Glasgow: Does...