The Process of Emancipation is the Story of America 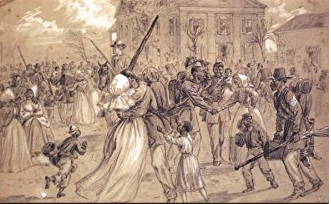 The major motion picture Lincoln, which focused on the political struggle to pass the Thirteenth Amendment, recently exposed popular audiences to the problem of emancipation. There is a lot to like about the film. It exhibited historical authenticity, compelling performances, and persuasive dialogue that award-winning director Steven Spielberg beautifully crafted into an enjoyable two-and-a-half hour film. Yet, it also reinforced a popular narrative that locates emancipation in a decisive political act—freedom becomes, we are told, a fait accompli in 1865. It is a story with which many are comfortable, for slavery remains incongruous to Americans’ fierce commitment to liberty.

In the midst of this celebratory atmosphere and during the rather subdued sesquicentennial celebration of the Emancipation Proclamation, we started an on-going dialogue with a group of diverse scholars to explore the dimensions of emancipation and the legacy of slavery. The vibrant discussion ultimately culminated in our edited collection, Rethinking American Emancipation: Legacies of Slavery and the Quest for Black Freedom.

As our authors demonstrate, freedom came in many forms for the enslaved. During the early years of the American Civil War, mostly male slaves used southern roads and railways to escape bondage. As the war progressed, tens of thousands, which became hundreds of thousands of enslaved men, women, and children, took flight. Countless others experienced liberation with the advancing Union armies that became the physical embodiment of President Abraham Lincoln’s Emancipation Proclamation. In the conflict’s waning days, these same troops helped realize and defend African Americans’ legal claims to freedom. Acts of self-liberation, political decrees of freedom, and intervention by the state were powerful statements during an era of revolutionary change in which black and white Americans defined the contours of freedom. Emancipation was ultimately a process and freedom a contested claim, as reflected by the protracted struggle over how American life would be remade without slavery.

How, though, would these complex and competing narratives play out in book form, we wondered. As the project took shape, we asked our authors to consider how place informed their understandings of slavery’s demise; how the memory and meaning of emancipation or freedom shifted over time; and what shadow did slavery’s existence and demise cast on society at large, on individuals, and on the ways in which we create, retell, and remember history? The authors responded with gripping portraits of emancipation as a process, asserted the power of freedom’s meaning, and puzzled over emancipation’s memory. Ultimately, then, the emerging story of the struggle over black freedom required chronological breadth, an expansive geographic lens, and a consideration of how to balance struggle with success. The authors’ diverse approaches resulted in a volume that reconsiders slavery’s end; examines the fluid boundaries of freedom; stresses persisting “unfreedoms;” and considers how memory resulted in competing narratives of slavery and freedom.

Black and white Americans fiercely challenged the meanings and consequences of emancipation. These debates created a disquieting narrative that has largely been lost among public audiences. This is unfortunate, though, because as Laura Edwards notes in the volume’s Epilogue, “the process of emancipation is the story of America.”

Rethinking American Emancipation: Legacies of Slavery and the Quest for Black Freedom edited by William A. Link and James J. Broomall

About the Author: William A. Link

William A. Link is Richard J. Milbauer Professor of History at the University of Florida. His books include Roots of Secession: Slavery and Politics in Antebellum Virginia; Righteous Warrior: Jesse Helms and the Rise of Modern Conservatism; Atlanta, Cradle of the New South: Race and Remembering in the Civil War's Aftermath; and Southern Crucible: T...

About the Author: James J. Broomall

James J. Broomall is Director of the George Tyler Moore Center for the Study of the Civil War and Assistant Professor in the History Department at Shepherd University. A contributor to Creating Citizenship in the Nineteenth-Century South and Civil War History, Broomall's writings have also appeared in A Companion to the American Civil War in the Jo...