“I know not what course others may take,” Patrick Henry concluded his speech to the Virginia Convention in 1775, “but as for me, give me liberty or give me death!” So powerful was his cry that many consider it the rhetorical spur to the American Revolutionary War. 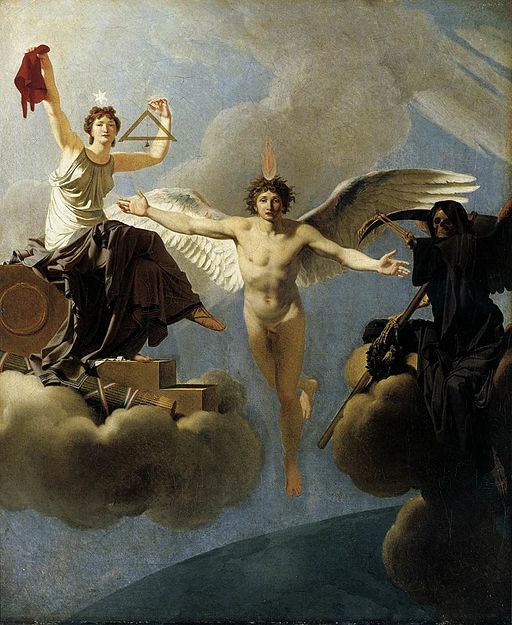 The Genius of France between Liberty and Death by Jean-Baptiste Regnault [Public domain], via Wikimedia Commons.

Some twenty years later, painter Jean-Baptiste Regnault portrayed “The Genius of France between Liberty and Death.” The angel’s eyes pierce our gaze, his wings and stretched arms pointing towards life, liberty and equality on the one hand, death on the other; his feet pointing at France.

The choice is ours. Or is it?

For Regnault, as for Henry, this is no moral dilemma, but an imperative, no real “either-or,” but an order: Liberty above all, something, perhaps the only thing, worth killing for, dying for, since without it one is as good as dead. This call to arms has long inspired the West, attaining its civilizational apex in World War II. Since then, it has been on the descent. Today, Frank Capra’s Why We Fight, the liberal rebuttal to Leni Riefenstahl’s Triumph of the Will, provokes amusement and scorn with contemporary liberals. Is there any cause truly worth dying, let alone killing, for?

Life, perhaps, but liberty is just one path to lead life. ISIS carnage sows fear, and we may take flight, fight or freeze, but Muslim rule need not be murderous. The centuries-old chronicles of the Caliphate have been often benign, its killings eclipsed by both Christians and atheists. And if life is secure, relinquishing liberty can be quite liberating. A chance to put the human mind at ease (especially if you are a man). Michel Houellebecq’s Submission (English for Islam) thus unveils dull liberalism’s willingness to surrender its cause in order to satiate itself and satisfy its enemies.

But now terror reigns, and fearing we might not always have Paris, fight we must.

Faintly echoing the good old “liberty or death” warcry, three key strategies, not mutually exclusive, emerge: kill them, let them kill each other, and kill them softly (with our words). None bode well.

This ISIS attack was squarely against the West, a mere fifth of “all of humanity,” with whom we share scant “universal values,” and of whom we have only partial, often superficial, understanding. A case in point is the debate on whether or not to use the adjective “Islamic” in referring to ISIS/ISIL (as if it’s not already part of the acronym). Religions are what we make of them, not merely what their sacred corpora may suggest. Islam is not the enemy of the West, but many Islamists are, by their own conviction, regardless of facts, hence ISIS’s damnation of the land of laïcité as “Crusader France.” Know thy enemy, ISIS version.

Fascism lends a conceptual hand. Bernard-Henri Lévy joins many in urging, “We must give the enemy its real name. Its name is not terrorism—it’s Islamofascism.”

And fascist ISIS is, for its hideous social practice echoes the rationale of the fascio—the sheaf of rods, once independent, now dried and tied up into a uniform unity that forcefully holds an axe—a symbol that fascinated the Roman political imagination and inspired Italian fascism. Enlightened France and the West must thus rise again, as they once did, against the fascist forces of tyrants and clergy.

But another look at Regnault’s canvas draws shades of grey in this black-and-white battle. At the feet of Marianne, the goddess of liberty and reason, lies the fascio, bound by the tricolor ribbon. Fifty years later, in the Great Seal of France, Marianne holds fast the fascio. 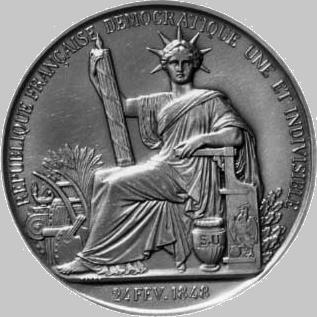 Forty years later, Marianne, headdress and all, crosses the Atlantic, to inspire the Statue of Liberty. Nearby, in NYC, where George Washington was sworn in as the first President, stands his statue, his cloak covering the fascio.

To the South, the Abraham Lincoln memorial in Washington DC pivots the leader atop a fascio-made seat. Next, in the House of Representatives, fascio-axes stand on the wall behind the speaker, on both sides of the US flag.

Is the color of the ribbon tying the rods – all of us – the only thing that separates tricolor democracies from black-banner theocracies? Surely not. We murdered God and mastered nature to liberate people, not to enslave them. Whether the telos of toleration is rationality or truth, our fascio-axe is Occam’s razor, not the guillotine. Ours is not The Grand Inquisitor, luring people into submission, but a Grand Liberator, setting them free. 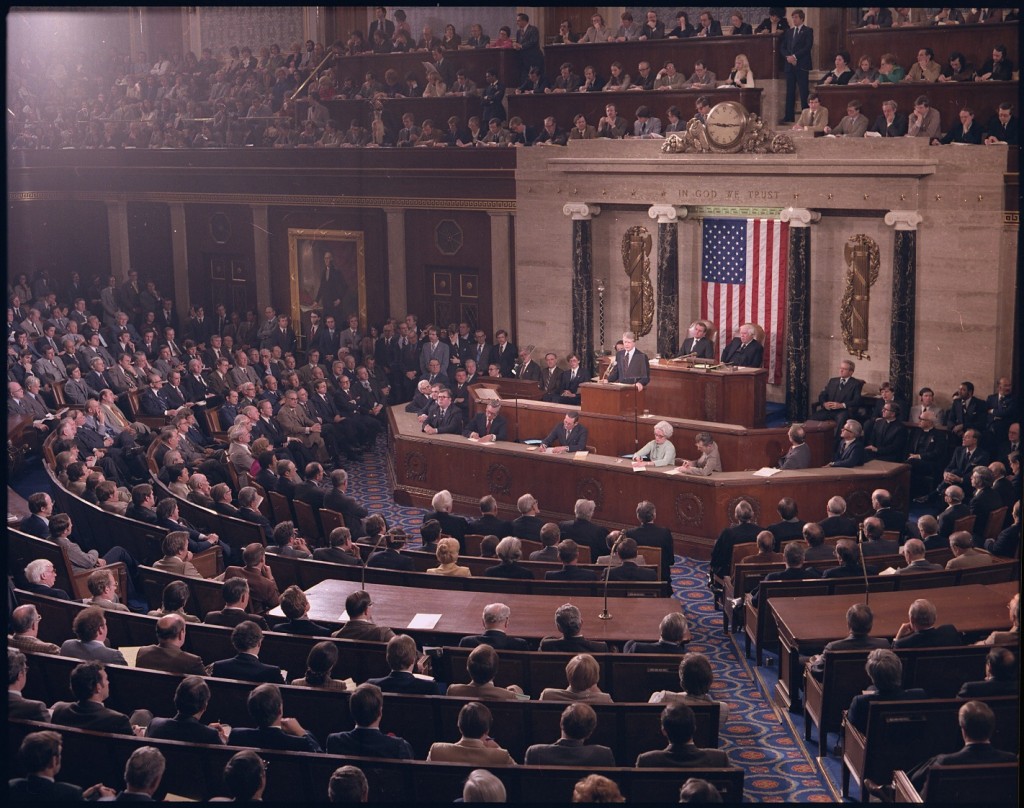 The House of Representatives, with fascio-axes displayed on either side.

Still, the fascio remains, reminding us of the moral frailty of modern social contracts. The fascio introduces the uncanny at the heart of liberalism, inviting us to go down, then step up, the uncanny valley into a more sober, humble, realization of our socio-political life. In our secular cargo-cult it is easy to forget: Liberty is not freedom. Our two concepts of liberty are both about mastery: “over what area am I master?” (negative liberty), and “who is the master?” (positive liberty). But liberty as mastery says nothing about freedom as choice. I can be the master of the universe, and still believe I have no choice. I can escape from freedom, to bad faith, to fatalism, and often to fascism.

This abyss awaits us all, secular and religious, conservatives and liberals. It complicates our relationship with death. After all, if liberty, especially negative liberty from external impediments, is what I crave, I might soon discover that death is my liberator, my emancipation from all earthly constraints. Indeed, even if, out of habit, fun or fear, I do not kill myself, I may readily prefer not to have children, and commit, wittingly or not, a civilizational suicide. A world of terror, cynicism, self-indulgence, and broken promises, is not a welcoming cradle.

Freedom, unlike liberty, cannot be given, nor taken away.

Even in the gravest circumstances, we remain free, we can make a conscious choice. It is freedom that sets us apart, and brings us together, as humans. By opting out we shun our very humanity, our human existence. To live up to our humanity we ought to consciously, and conscientiously, turn orders to dilemmas – turn fascio to forests.

The stories behind your cup of...

Should the United States embark on...