UN Climate Talks and the impact on the High-Mountain Cryosphere

One of the remarkable points of the new Paris Climate Agreement is that 1.5°C is anchored in the text in addition to the 2°C target. Both temperatures refer to increases of average global annual temperature compared to pre-industrial conditions. Obviously Small Island States were among the Parties that pushed for 1.5°C in recognition of the importance for their survival but mountain countries such as Bolivia also claimed for 1.5°C as early as at the Conference of Parties (COP) in 2010.

However, it is well recognized that the commitments concerning emission reductions made so far by Party countries (Intended Nationally Determined Contributions, INDC) will not fall in line with a 2°C target (and obviously , less still with 1.5°C). It is also clear that emission reduction efforts would need to be far stronger for a target of 1.5°C although the difference may not be drastic as the most recent Emission Gap Report by the United Nations Environment Programme (UNEP) assesses. 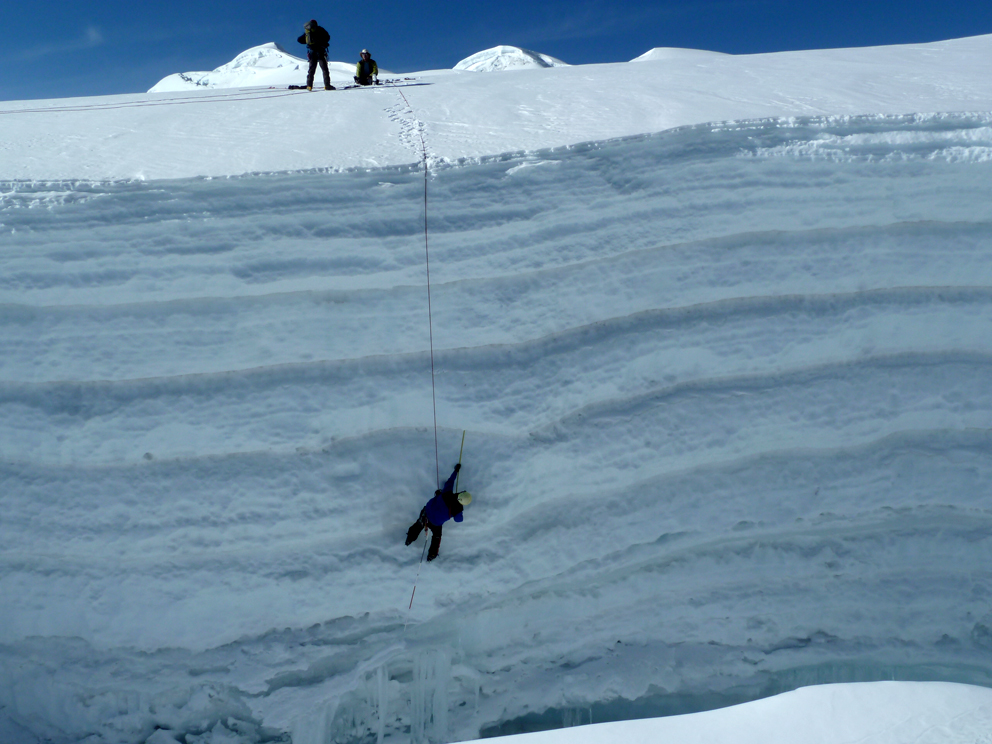 In fact, the high-mountain cryosphere is particularly sensitive to climate change, and glacier decline is among the most visible signs. However, the high-mountain cryosphere change is more than just glacier decline, there are multiple dimensions at work in high-mountain cryosphere environments, including both the natural and human perspective.
But let’s get back to the 1.5°C target for a moment: As a lead author of the IPCC Working Group 2 AR5 I was part of the Structured Expert Dialogue (SED) of the United Nations Framework Convention on Climate Change (UNFCCC), a very constructive exchange between science and policy which recently concluded with a substantial final report.

During the SED, questions concerning the importance and impacts of a 1.5°C temperature increase as compared to the 2°C scenario were repeatedly discussed but we had to recognize (or admit) that, so far, science has relatively little to say on what this means in terms of impacts.

This is accordingly reflected by the IPCC AR5 which was not very explicit on the 1.5°C issue. Only very few studies have explicitly considered the effects of policy relevant temperature targets, such as the 2°C limit, for the high-mountain cryosphere, though an example can be found in a study on Swiss glaciers led by one of our book authors.

Policy may miss an answer on the 1.5°C issue but I am inclined to say that our book is able to draw an unprecedented picture of the many physical, environmental, economic, political and social dimensions and how they interact in high-mountain regions.

Water is without any doubt one of the dominant and central issues for environmental changes and risks (just consider the many visible warnings illustrated by dwindling glaciers and rising sea levels) and therefore also takes a prominent role in our book. While some chapters focus on effects of changes on downstream water resources, others put this in a socio-political context highlighting, for instance, conflicts over water in the Andes and the Himalayas. 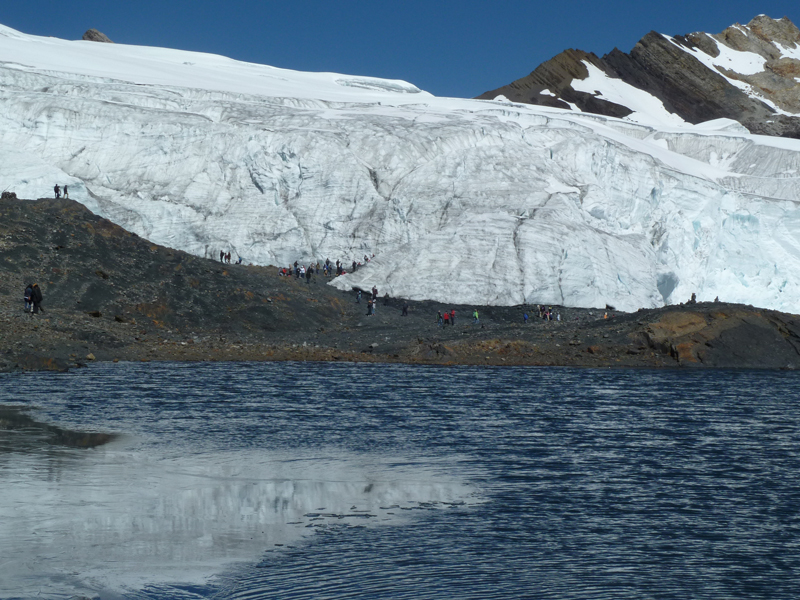 Pastoruri glacier in the Cordillera Blanca in Peru, a very popular tourism site, with access on the glacier now prohibited. Photo: Christian Huggel.

It becomes clear that it is not just environmental conditions that determine over peace and welfare in these regions but also historical trajectories, power relations, local perceptions or cultural issues.

The importance of perceptions on environmental and cryosphere change by local people becomes clear from a number of chapters which offer a fascinating and extraordinary insight into the intimate, but locally differentiated relationship of people and their local environments in the Andes, Tibet or the Alps. 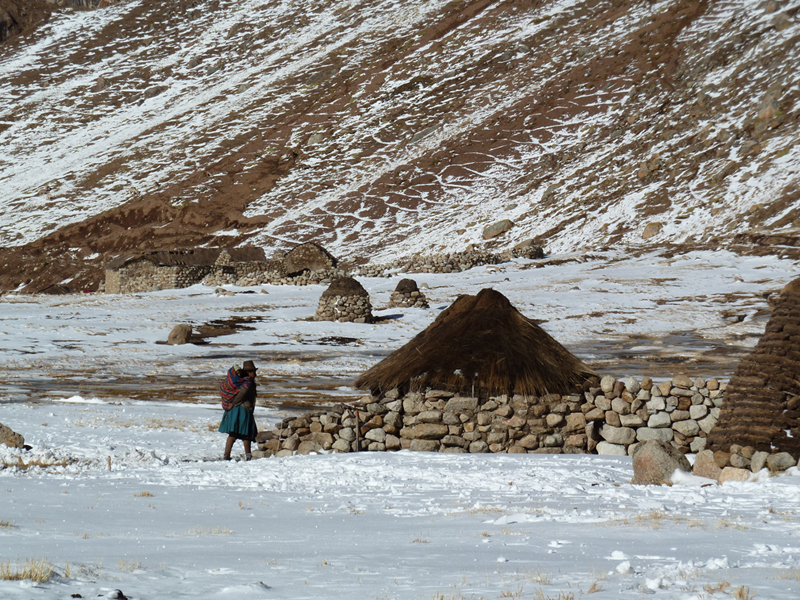 Woman in the Altiplano of Peru (at close to 5000 m asl), after fresh snowfall, reaching a temporary hut. Photo: Christian Huggel.

Despite the scarcity of studies on the subject, we are confident in stating that it substantially matters for the high-mountain cryosphere whether the global climate heats up by 1.5°C or 2°C. In both ‘worlds’, however, we have to deal with irreversible loss. Not only of glaciers and snow, which are highly relevant for water provision, but also loss of cultural identity for regions and people in the Himalayas, the Andes and elsewhere.

We should thereby remind that since the 19th century, we have seen an increase in global temperature of approximately 0.85°C, and thus 1.5°C implies almost a doubling of this observed warming. Furthermore, warming is often amplified in mountain regions. If we consider how drastically glaciers have changed during the past 150 years, with less than 1°C of global warming, we may project what 1.5°C could look like. Especially when considering that glaciers are not yet in balance with the current climate and would continue to retreat even if warming could be stopped tomorrow. 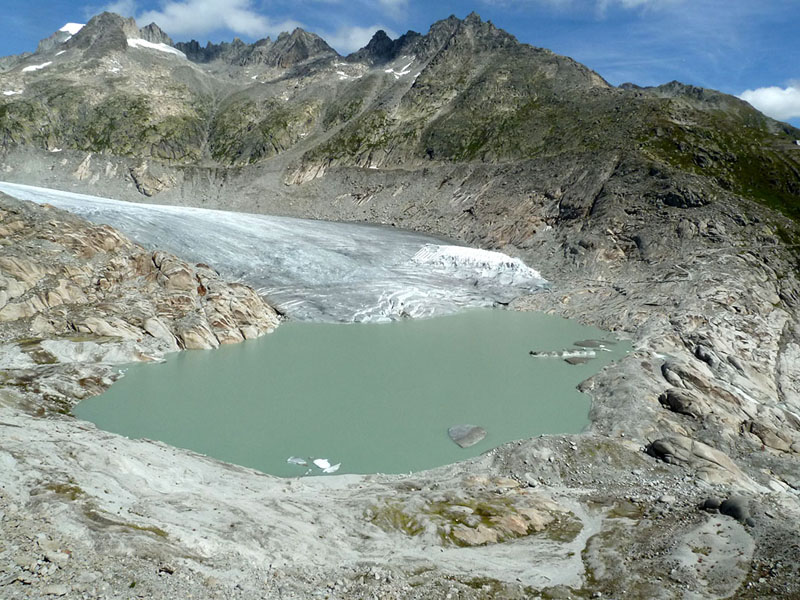 As glaciers recede, many lakes have formed in the high mountains of the world such as at Rhone glacier, Swiss Alps (note at the right margin of the glacier extensive coverage of glacier by geotextiles to ‘save’ the local ice cave for tourists). Photo: Christian Huggel.

Adaptation is and will be forming a key response to the impacts of climate change. From my own experience in the Andes or the Himalayas I am convinced that the full-breadth view that integrates multiple dimensions is essential in order to design successful and sustainable adaptation.

In my humble opinion it is this multi-dimensional perspective, allowing us to dive into a fascinating environment under multiple stresses, that really drives the research behind our book and I dare to say it changes some of our views once we reach again surface after the read.

About the Author: Christian Huggel

Christian Huggel is an editor of The High-Mountain Cryosphere: Environmental Changes and Human Risks (2015). He is a Senior Researcher at the Department of Geography, University of Zurich. He has worked in mountain regions and the cryosphere worldwide, including the European Alps, the Andes, Mexico...

Water Quality Impacts of the Energy...