Barry S C Leadbeater, author of The Choanoflagellates: Evolution, Biology and Ecology (2015) tells about his early career and why he chose to write his latest book.

“Surprisingly, my choanoflagellate studies were my hobby. Most of my professional life was taken up with teaching and researching algae.”

In 1970, as a recently appointed lecturer at Birmingham University, I visited Norway to collect nanoplankton from coastal waters. Fixed samples were prepared for electron microscopy and on analysis back in Birmingham I was surprised to observe many small cells each with a single flagellum surrounded by a collar of microvilli. What was particularly striking was that each cell was surrounded by a silicified basket-like cage called a ‘lorica’.

Serendipity played a large part in my unintentional introduction and subsequent interest in choanoflagellates.

What were the major milestones in your work on choanoflagellates?

Obtaining a clonal culture of a loricate choanoflagellate (Stephanoeca diplocostata) from the coast of France in 1976 was a major breakthrough. This species proved to be easy to culture and ideal for experimentation particularly in relation to silicon metabolism.

An opportunity to spend three months at the University of Melbourne, gave me the opportunity to use Jeremy Pickett-Heaps’s outstanding video equipment to record cell division in a selection of species. As a by-product of this visit I also managed to isolate and culture two seminally important species (Acanthoeca spectabilis and Didymoeca costata) illustrated extensively in the book. A third landmark was to have the opportunity to undertake two sea-going collecting trips to Iceland (1981 and 1997) and a collecting trip to the Southern Ocean (1996) with a visit to South Georgia.

Finally, another landmark was to have the opportunity to collaborate with Sandra Baldauf and Martin Carr at York University on the molecular phylogeny of choanoflagellates.

How come that lecturer in cryptogamic botany came to research in protozoology?

Surprisingly, my choanoflagellate studies were my hobby. Most of my professional life was taken up with teaching and researching algae. However, as a protistologist the separation between what is respectively considered to be botany and zoology became irrelevant. I was fortunate to be able to inhabit both disciplines and this gave me a much greater breadth of subject interest. It also introduced me to an extensive circle of interesting colleagues and friends.

Why did you want to write a book on the choanoflagellates?

I was fortunate to work on choanoflagellates at a time when little was known of this important group of protists. This gave me a good opportunity to build up substantial portfolio of information on many aspects of the subject – morphology, ultrastructure, physiology and ecology.

Overlaps between these disciplines gave me an opportunity to make insightful connections between, for instance, silicon metabolism and lorica assembly which had evolutionary implications. The relationship between the mechanism of lorica assembly and the resulting patterns of silica costae was also important. A book format provides an opportunity to explore these connections in a more expansive manner than is possible either in a paper or a review article.

What do you consider to be the most important and original aspects of your book?

The most important and original aspect of the book must be the central chapters (4-8) which explore the construction and assembly of the lorica and the variety of costal patterns. The reason that I select this aspect is that it is such an integrated story combining cell ultrastructure, silicon-uptake physiology and the detailed logistics and movement of silica costal strips outside the cell. In the broader sense it combines and integrates evolution with ecology and cell function.

Other important aspects include: (i) the detailing of the history relating to the relationship between choanoflagellates and sponge choanocytes and the consequent evolutionary implications, (ii) the review of ecological studies from the mid-nineteenth century to the present day and (iii) recent important molecular genetic work, particularly with respect to choanoflagellate and opisthokont phylogeny and the origin of metazoan multicellularity.

Who will benefit from reading the book?

The book will of interest to protistologists, aquatic biologists, evolutionary biologists, systematists, zoologists and scientists involved with biomineralization and the origins of metazoan multicellularity. I hope that undergraduates and postgraduates will enjoy reading aspects of the text.

In the longer term I hope that the logistics and mechanism of lorica production and assembly will be assimilated to the larger scientific community. 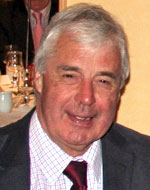 Barry S. C. Leadbeater is author of The Choanoflagellates: Evolution, Biology and Ecology (2015). He is a retired Reader in Protistology at the University of Birmingham. His academic research interests include: ultrastructure, physiology and ecology of algae and protozoa, whereas his biotechnological research interests include: algae and water quality; physiology of algal/protistan biofilms and biological aspects of water treatment processes. He has authored and co-authored over 80 papers, edited five books and, presently, he is a monitoring editor of the journal Protist.