5 facts you should know about Choanoflagellates

Choanoflagellates are a distinctive and important group of tiny unicells (protists) that are universally present in freshwater and marine habitats. They are colourless and possess a single vibrating thread (flagellum) that is used for swimming and for creating water currents from which they can capture bacteria and other small prey particles.

Choanoflagellates have some similarities to the flagella-bearing cells of sponges (choanocytes) often regarded as the simplest living animal, at the base of the animal tree of life. This raises the possibility of there being an evolutionary link between the choanoflagellates and early animal life.

Here are five facts that you should know about choanoflagellates: 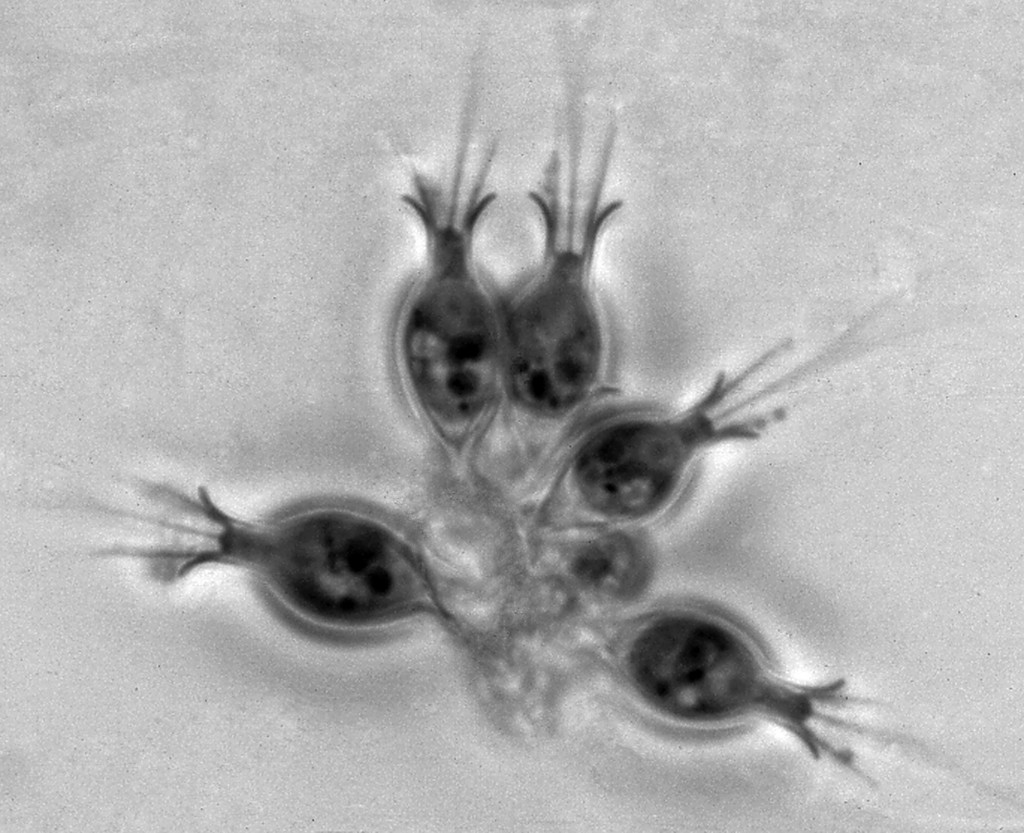 1. Choanoflagellates were first recognised as a distinctive group of protists by an American microscopist in the nineteenth century.

Henry James-Clark, an American naturalist born in Massachusetts (1826), first described four collar-bearing (choanoflagellate) species in 1867. He was the first microscopist to recognise the collar as being the defining character of this new group of protists. At the same time he noted the similarity of choanoflagellate cells to the choanocytes of the calcareous sponge Leucosolenia botryoides.

2. Choanoflagellates are the sister group to Metazoa (Animals)

3. Choanoflagellates are ubiquitous in aquatic habitats.

Choanoflagellates are one of the most widely distributed protistan groups. They are present in a wide variety of marine and freshwater habitats. They are universal in soils, abundant in polar waters, occur at abyssal depths of the oceans and in the permafrost of Siberia. Choanoflagellates have been retrieved from frozen soils approximately 32,000 years old!

4. Some choanoflagellates utilise silicon to manufacture a basket-like covering.

Loricate choanoflagellates (Acanthoecidae) use silicon from seawater to deposit ‘matchstick’ like rods of silica, called costal strips, to construct a pattern of costae that form a surrounding basket-like cage (lorica). The function of the lorica is to enclose the cell and direct the flow of particle-containing water onto the collar thereby enhancing prey capture. The basket may also inhibit cell movement and reduce sinking rate.

The genetic toolkit responsible for Metazoan (animal) multicellularity comprises a select set of highly conserved genes from a limited number of gene families that are involved with cell adhesion, intercellular communication and coordination, tissue differentiation and programmed cell death.

Some of these gene families have their origins in unicellular opisthokonts such as choanoflagellates. In particular, the premetazoan origins of cell adhesion molecules such as cadherins and integrins, and cell-signalling transduction pathways such as Hedgehog and tyrosine kinase have been identified.

About the Author: Barry Leadbeater

Barry Leadbeater is the author of The Choanoflagellates: Evolution, Biology and Ecology (2015). He is a retired Reader in Protistology at the University of Birmingham. His academic research interests include: ultrastructure, physiology and ecology of algae and protozoa, whereas his biotechnological...