Quietly, as yet watched only by a few, a storm is brewing. Seabed mining – the recovery of minerals from the floor of the deep ocean – is passing from the realm of fantasy to that of fact. The International Seabed Authority (ISA), established in 1994 under the United Nations Convention on the Law of the Sea, is formulating a mining code to regulate industrial activity in the international portion of the seabed. Island States of the Pacific are preparing to license commercial mining in their continental shelves, they are developing legislation to this end in consultation with the European Union; the G7 States, all individually exploring mining opportunities, have recently expressed their collective interest in the development of an international legal framework; and with China’s offer to India, of a joint mining operation, and both states’ separate and simultaneous outreach to the Pacific States, the ideal of ‘South-South cooperation’ is entering into a new arena.

Corporations, dreaming of a new billion dollar industry and waxing eloquent about a fresh ‘gold rush’, have obtained twenty licenses from the ISA for exploration in the international portions of the Pacific, Atlantic and Indian oceans, and are expected to proceed to commercial recovery of minerals in the next decade. Elsewhere, commercial recovery may commence as soon as 2018: in the continental shelf owned by Papua New Guinea, which has licensed for this purpose the Canadian company Nautilus Minerals.

Environmentalists, marine ecologists and Pacific coastal communities are worried about the impact of mining activity. It is apprehended that such activity will stir up vast plumes of sediment on the seabed and release toxic gases trapped under the earth’s crust, poisoning the oceans and causing extinction of several species of plants and animals. Moreover, our ignorance of the oceans remains such that we cannot fully predict what other impacts might follow. In a paper published in Science, eleven oceans experts have urged the ISA to embrace a precautionary approach for the international seabed that includes the creation of no-mining areas to protect fragile marine habitats, and suspend exploration contracts until this is accomplished.

For some others, seabed mining represents the dawn of a new techno-utopia, in which we will gradually begin to live on, and indeed in, the oceans. Shimizu Corporation of Japan, together with Tokyo University and the Japan Agency for Marine-Earth Science and Technology, has unveiled 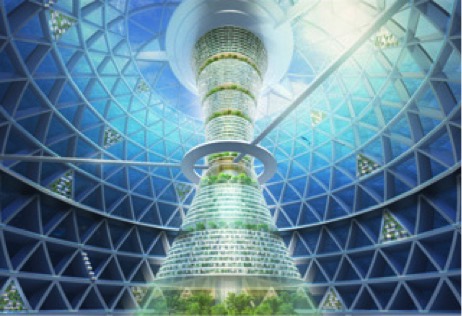 a plan for the construction of giant floating cities: each enclosed in a glass sphere and attached to a spiral structure embedded in the seabed which would provide a pathway for its submergence to great depths – to avoid bad weather, cut carbon emissions, sightsee, or conduct research (see image at the end). Phil Pauley, head of the UK based innovation consultancy Pauley, has also written about a mission to develop self-sustaining human habitats under water, not least to enable us to better monitor the environmental impact of seabed mining.

Adventure, the lure of great profit, legislative flurry, ecological anxieties and visions of a new life under the sea: we have been here before. As my book Strategically Created Treaty Conflicts and the Politics of International Law details, the present dream of seabed mining has a precursor in a previous occasion on which stakeholders were convinced enough of its viability as to make it a central component of their international legal and politico-economic relations. This was in the late 1960s and 70s, when mining fever led to the opening of negotiations on the UN Convention on the Law of the Sea. Those negotiations got mired in Cold War politics and in New International Economic Order-related developed/developing State confrontations. They were also overtaken by revelations that mining technology remained elusive. Nevertheless, they resulted in a major outcome: the UN regime for seabed mining embraced the principle that the seabed should be regarded as the common heritage of mankind. That is, a resource to be used for the benefit of the international community as a whole. Today, it is that principle, and the recommendations that follow from it, that govern the ISA’s efforts to formulate a mining code which balances commercial principles with distributional equity and environmental protection.

Revisiting the legacy of those past negotiations, and the conclusions that they generated, is imperative for current policy making efforts. These reveal not only a history in which, despite the political tensions of time and crisis thinking about population and resources ideas of global community were nurtured and translated into legal doctrine, but also a discussion of possibilities that could guide us forward into the future.

About the Author: Surabhi Ranganathan