A Warning to Witches

With three villagers hanged on charges of witchcraft, nearby churches were set on a mission to discourage their parishioners from falling into the darker arts of witchcraft via annual sermons during the superstitious age of 16th Century England.

In 1593, just nine years after Cambridge University Press published its first book, the lives of the Samuels family in the nearby Cambridgeshire village of Warboys changed forever.

Elderly widow Agnes Samuel, her daughter, and son-in-law were put to trial, found guilty of witchcraft, and hanged.

It is claimed that they, and via their 9 named familiars (demon agents that most often appeared as tame chickens), they ‘bewitched the five daughters of Robert Throckmorton’, and were responsible for the ‘bewitching to death of the Lady Cromwell, the like hath not been heard of in this age!’.

The shockwaves of this trial made compelling gossip and reading at the time, and local parish leaders were keen to discourage the practice of witchcraft amongst their communities. Collectively this trial and execution became known as The Witches of Warboys, and has since been written about extensively, and fuelled the curiosity of paranormal investigations. 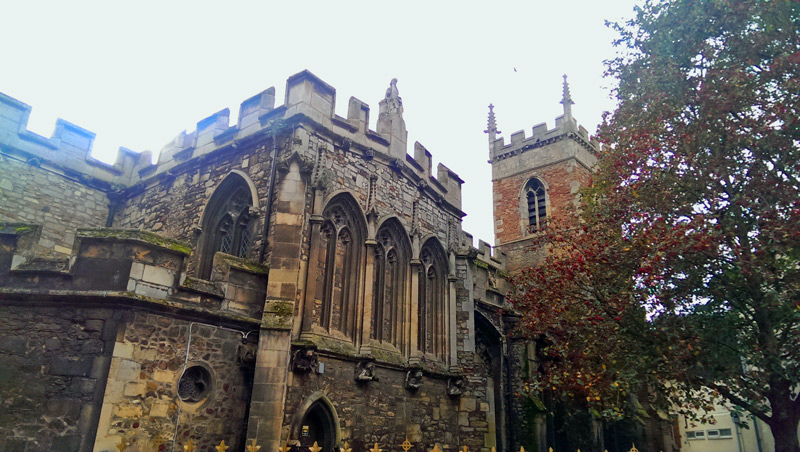 All Saint’s Church in Huntingdon, Cambridgeshire, England, where sermons were given to discourage witchcraft after the trial of the Samuels family.

Sir Henry Cromwell (the grandfather of Oliver Cromwell, Lord Protector) used the Samuels’ confiscated property to fund an annual sermon to help discourage the parishioners of the nearby All Saint’s Church of Huntingdon (just opposite the former school of Samuel Pepys and Oliver Cromwell) from practising witchcraft, or following a similar temptation.

Even though beliefs about witchcraft had changed by the 18th Century, the sermons continued until the early 19th century – they had become a tradition. By the late 1700s a collection of them given by Martin Joseph Naylor (a Queen’s College Fellow) titled The Inanity and Mischief of Vulgar Superstitions (re-published by Cambridge University Press in 2012) was published containing the sermons from 1792-1795.

In Sermon III, the feeling of fear and threat of witchcraft is made very clear:

“..But one difficulty, may our adversaries triumphantly say, yet remains unremoved. Did not many confess their guilt? Have there not been numerous instances of those who have openly acknowledged their abominable witchcrafts, and impious league with the Daemons of darkness? With sorrow, not unmingled with shame, do I confess that the number of such has indeed been considerable”.

Clearly the community was concerned about the threat amongst them.

“Alas! poor human nature, how frail, how imperfect are all thy vaunted excellencies!

But he also damns the power and hold of these demons:

“God has not enlarged their powers in reward of their disobedience, but ‘has cast them down into hell; and reserved them in everlasting chains, under darkness, unto the judgement of the great day'”.

Perhaps this is a warning for the eager-eared parishioner – a reminder that their fate might be similar if they were to stray from the right path. It can also read as a reminder that no matter what is promised by demons, God has ensured that they are just empty promises – worth ignoring.

As commentary on the then current affairs goes, the words are strong, forceful, loaded with a fear…  but seemingly also desperate to save others from the rope and same fate as the Samuels family.