The Case of Feral Water Buffalo in Australia

Mario Melletti, the author of Ecology, Evolution and Behaviour of Wild Cattle, discusses how water buffalo introduced into a new landscape can wreck havoc on the environment.

In my previous post I introduced my book describing the main topics treated. Here I continue with a very important question regarding the impact of wild cattle on the ecosystems. In particular I describe the effect of the introduced feral water buffalo (Bubalus bubalis) in Australian wetlands. 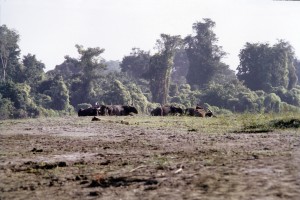 The wild water buffalo is listed as endangered by the IUCN. With an estimated world population of just 3300-3400 individuals, this species is threatened through its range (Choudhury, 2014). Because of very low densities in many areas, its effect on habitat structure is not easy to detect. Things change when we take into consideration the feral water buffalo (domestic form of wild water buffalo) introduced in Australia that at high densities can modify landscapes, functioning as a keystone species (Prins and van Oeveren, 2014 Chapter 2 in my book).

Alien species such as mammals, birds, reptiles, insects, etc. may have cascade effects on the environment. For example, some large mammals at high density, may have devastating impact on the ecosystems. Among these, two species, namely the feral water buffalo and to much less extent the banteng (Bos javanicus), have had a profound impact on vegetation and estuaries in the Northern Territory of Australia. Today a similar effect can be seen in the Dutch salt marshes by domestic cattle (H. H. T. Prins, personal observation).

In Australia while banteng remained in a more confined range with smaller numbers than water buffalo (from 20 in 1849 to about 10,000 individuals in 2005; deKoninck, 2006), the latter species, on the contrary increased from about 80 animals in 1825 to 120,000 in 1960s (Tulloch, 1969) with an annual increase of about 7-9%. During the 1980s were estimated about 280,000 water buffalo lived in the Northern Territory. The current population is now estimated at 80,000 individuals after a strong culling during the last decades (Jesser et al. 2008). Feral water buffalo populations also exist in other regions, for instance in Brazil and Argentina, where they are a threat to wetlands.

The underlying cause of this huge impact on environment is to seek in the wallowing behaviour of buffalo. By 1970s the Australian Government began a campaign to remove this species from the Northern Territory since their wallowing transposed swamps with clear water, abundant water-lilies and other plants on which magpie geese (Anseranas semipalmata) but also native people depended, to muddy waters with lowered biodiversity (for more details see also Corbett et al. 1996; Petty et al. 2007; Werner, 2014; Prins and van Oeveren, 2014). Besides the impact on the swamp structure, the buffalo has had a strong effect on the tidal creeks and channels. By removing the vegetation, the erosion rate increases and channels become much deeper (Petty et al. 2007). Similar cascade effects occurred in Kakadu region where buffalo removed most of the surface vegetation through their behaviour. This created channels that connected freshwater directly to tide-bearing channels and then directly impacted this ecosystem (Petty et al. 2007). This had a cascade effects on many communities of animals (e.g. reptiles, amphibians, birds and insects; see also Friend and Taylor, 1984). For example magpie geese declined during the time the buffalo increased and even many small vertebrates followed the same trend (Werner, 2014). Furthermore, buffalo harbour diseases that could affect native species and livestock; the most significant being brucellosis (Brucella abortus) and bovine tuberculosis (Mycobacterium bovis). Besides the impact on the ecosystem, it is worth noting that this species is an important source of protein for Indigenous people, providing them with commercial benefits through safari hunting, dairy products and tourism. Buffalo are also exported live to a number of Asian countries for slaughter and as breeding stock. The live-export trade fluctuated considerably over the past decade but in 2006 contributed an estimated $3 million to the local economy. In addition to the socioeconomic benefits, using the animals commercially can also help in their control (Government of Australia, 2008).

In conclusion the management of the feral water buffalo poses a serious challenge and the consequent high costs make total eradication almost impossible. In this contest reconciling the needs of native people and the health of ecosystems is a much needed task that should guide targeted management actions.