As debates rage across the American South about the Confederate flag's place in our country's past and present, Cody Marrs, the author of Nineteenth-Century American Literature and the Long Civil War, contemplates the abiding conflict created by the American Civil War and the larger global fight for freedom.

Over the past four years, people have been commemorating the Civil War’s sesquicentennial—that is, its 150-year anniversary—in myriad ways. There have been plays, tours, exhibitions, symposiums, and dedications of almost every stripe across the North and the South. Robert E. Lee’s surrender at Appomattox Courthouse has been painstakingly reenacted. Abraham Lincoln’s death has been restaged, and his entire funeral cortege—as well as his elaborate black coffin—has been recreated. Graves have been visited. New memorials have been constructed. Regiments have been re-mustered, books reconsidered, and recipes revived.

As the recent events in Charleston have demonstrated, the Civil War never quite concluded in the first place

There are compelling reasons to commemorate the Civil War in this manner. It allows us, the modern-day heirs of the Civil War, to linger with the past and ensure that it does not fade from public memory. Yet as the recent events in Charleston (and the subsequent debates about the Confederate flag) have demonstrated, the Civil War never quite concluded in the first place. It is an abiding conflict in American culture, and in the American imagination. That sense of unsettledness is starkly registered in much of the literature occasioned by the Civil War—what I call in my book transbellum literature—which tends to connect us not to a given past, however vivid, but to an ongoing present violently opened up by the war.

That is true with a vengeance when it comes to Frederick Douglass, the former slave turned abolitionist writer, editor, and orator. For Douglass, the Abolition War (as he preferred to call it) was part of a much longer conflict between freedom and unfreedom that had been waged for centuries by a variety of peoples. To understand that conflict, he turned to a variety of discourses, such as philosophies of evolution and theories of perpetual motion, but he was drawn in particular to the examples provided by history. And the history to which he attached the most significance was the story of William the Silent, the laconic rebel who led the Dutch in their sixteenth-century revolution against the Spanish crown.

After reading about that revolution in John Lothrop Motley’s The Rise of the Dutch Republic (1856), Douglass wrote a speech about William the Silent that he delivered on numerous occasions. In that speech, he claims that Americans are “in larger measure than” anyone else the “fortunate heirs and possessors of” the Dutch wars of rebellion. Initially, he presents this inheritance as a shared revolutionary founding – or as he puts it, a “clear and logical” relation between “the war of the Dutch for civil and religious liberty” and “the American war for independence.” But almost immediately after juxtaposing these “two grand events,” Douglass directs his attention to the speech’s primary concern: the historical tie between the Dutch rebellions and the American Civil War. Prewar Netherlands, as Douglass describes it, sounds very similar to the prewar United States. The land is “tempest-tossed from end to end by a contest between two [forces]”; “the people are divided”; and the sufferings of the Dutch have been so “long” and “grievous” under the cruel reign of Philip II that Douglass says – as he often said of slavery’s most heinous aspects – that he has “no words to describe [them].”[1]

“Though the Dutch were fighting from the first for [. . .] religious freedom, they did not dare admit that pregnant fact to themselves [. . .] The fact is the Dutch cowered before the doctrine of the divine right of Kings, while we cowered before the doctrine equally absurd of the divine right of slavery. It is remarkable that when men come across anything in man that is too bad to be called human, they invariably call it divine [. . .] The Dutch made no progress really against Spanish persecution until they exploded this “divine right” humbug, and we made no progress until we exploded our “divine right” humbug and consented to part with our reverence for slavery, and called on the slaves to assist in the great struggle for national existence as well as for emancipation [. . .] Both nations were made strong when they discarded these delusions. It is alike instructive and entertaining to observe how gradually and almost imperceptibly these two nations are lifted from one step to another, in the shining pathway of human progress, by the simple logic of events [. . . and how, only] after years of suffering, after starvation and pestilence, after half the nation had been slain, the Dutch began to [finally] comprehend the true principles for which they were contending, and began to have a conception of what was right and true in the premises.”[2]

Douglass is drawn to the Dutch rebellions because its sequence of events seems to anticipate that of the Abolition War. In both cases, violence comes in the wake of suffering, but that struggle’s true principles manifest only post festum. For Douglass, the antislavery movement and the struggle for religious freedom are bound up with one another in “a relation of historical cause and effect.” In short: for the body to be freed, the mind first had to be liberated, and that freeing of the mind only occurred through the violent encounter of opposing forces. Initially, the Dutch rebels possessed no innate “attraction amongst themselves” and could not even “admit” the “pregnant fact” that religious liberty was their cause. It was only the “external pressure” of the Spanish crown that compelled them to unite and finally “comprehend the true principles for which they were contending.” As Douglass nicely summarizes this point elsewhere in the speech: just “as ours was the irrepressible conflict of the nineteenth century, so theirs was the irrepressible conflict of the sixteenth century.”[3]

After outlining the historical connection between these disparate conflicts, Douglass condenses that relation into the exceptional story of a single man: William the Silent. The latter, for Douglass, is not simply the leader of the Dutch revolts; he is the personal embodiment of the war in all of its historical and political totality. William, he explains, was perfectly suited for the crisis: “There was not an element of his character that could have been spared. He had the sagacity to see, the wisdom to accomplish, the eloquence to persuade, the courage to venture, [. . .] and [a] dignified reticence.” In fact, it was only through William’s superlative “statesmanship” that the “angry waves of [. . .] contention were silenced” and order was rescued from chaos.” 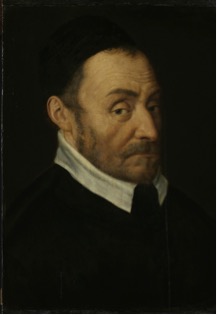 Dirck Barendsz, Portrait of William I, Prince of Orange, called William the Silent (1582-1592). Courtesy of the Rijksmuseum in Amsterdam.

In Douglass’s description, this Calvinist commander sounds eerily similar to “the first martyr President of the United States” – and that is hardly a coincidence. The idea that “[w]hat Abraham Lincoln was to us, [. . .] William the Silent was to the struggling cause of religious liberty,” is in many respects the animating claim of Douglass’s entire speech (FDP, 4:196-197). Despite the centuries between them, both of these leaders, he notes, “were loved by their people” (“[t]he countrymen of William soon learned to call him ‘Father William,’ as we learned to call Abraham Lincoln ‘Father Abraham’”) and were eventually destroyed by the very conflict that they so perfectly embodied:

“Like our lamented President, William died by the hand of an assassin; he died uttering a prayer in mitigation of the punishment of his murderer, and if Abraham Lincoln could have uttered a word after the cruel bullet of Booth went crashing through his brain, those who knew him best will not hesitate to believe that his last words would have been in keeping with that which came down from the cross: “Father forgive them, they know not what they do.” He had malice toward none, charity to all. The secret power of both men can be found in this very element of their character, [. . .] in their love for their fellow-men, even though these fellow-men were erring and criminal. Pilgrims pay their vows at the tomb of William the Silent, and while liberty has a home in our land, dusky pilgrims, at least, will find their way to the place where reposes the body of Abraham Lincoln.”[4]

The biographies of William the Silent and Abraham Lincoln overlap in astonishing ways. Both of these men relished silence; led armies in a great war; and, despite dying “by the hand of an assassin,” were known more for their “charity” than for their “malice” (terms that Douglass lifts from Lincoln’s Second Inaugural Address). As paradoxical as it seems, the “secret power of both” men resided in their unusual capacity for love. And that strange fusion of love and violence – of unimaginable war on the one hand and an unmitigated, almost Whitmanian affection on the other – is precisely why Douglass is so fascinated by the relation between these two wildly different, and distant, figures.

Douglass continued to develop that historical account long after he stopped delivering “William the Silent” on the lyceum circuit. Even as late as 1893, in one of his final speeches, he invoked this story to demonstrate how, in “all such prolonged conflicts,” progress can materialize out of “[c]rushing disaster, bitter disappointment, intense suffering, grievous defections and blasted hopes.”[5] Centering on a vision of centuries-long historical connection, Douglass’s discussion of William the Silent demonstrates the degree to which Civil War literature exceeds the Civil War itself, extending compositionally across the nineteenth century and imaginatively across time and space. In speeches like “William the Silent,” and in many other transbellum works, the Civil War emerges not as a single, discrete event, but as a nexus for revision and extension, as a rupture with a stunning array of trajectories and afterlives.

About the Author: Cody Marrs

Cody Marrs is the author of Nineteenth-Century American Literature and the Long Civil War....