Why does evolution work this way?

Enjoying Wallace Arthur's posts on evolution? You're in luck. Here the author of Evolving Animals (2014) puts together a creative analogy for understanding natural selection.

I ended my previous post (Embryos and Evolution) with two questions – a serious one and a ‘fun’ one. The answer to the latter (what’s the mystery embryo?) is ‘a centipede’.

But what about the serious one? Here’s a reminder of what it was:

Why does evolution work in such a way that early embryonic stages usually get modified much less than later developmental stages, including adults?

More than a century and a half ago, Darwin already had the answer. His ‘natural selection’ works by sifting through accidental variations produced, ultimately (as we know today), by mutations at the level of DNA. Accidental changes to a functioning animal will normally, of course, be detrimental. Only a very small proportion of such changes will make the animal better (fitter) rather than worse. 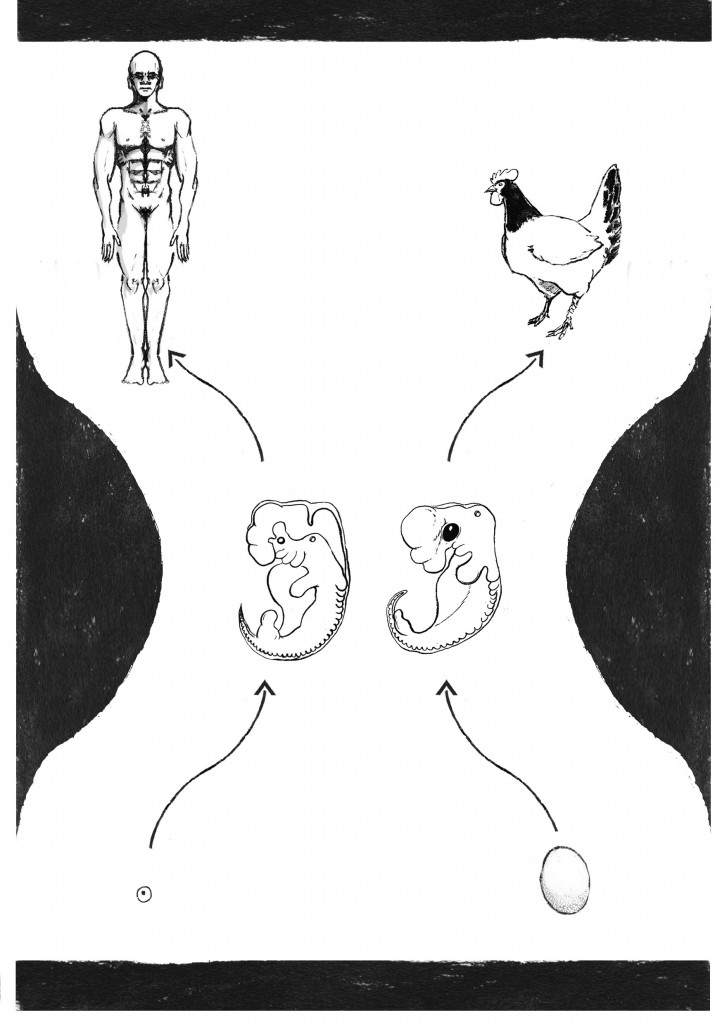 But there’s a weakness in the analogy.

A TV set does not develop from an embryonic equivalent; rather, it gets made in a factory. So there is an aspect of the way in which natural selection works that it does not capture, but which would be captured if the TV set was a living, developing, growing, expending creature, like an organism.

In a developing creature, the probability of making it better by accidental changes is already low when we consider a functioning adult; but it gets even lower when we consider early embryos, because any change in these will feed through to other changes (probably bigger ones) later on. So mostly the early embryo is left alone and those few evolutionarily-advantageous changes that affect the adult typically begin to show effects only in later developmental stages.

Nothing that we have learned in ‘the age of the gene’ changes this basic fact. So Darwin was right about why the early embryos of humans, cows and birds look much more similar to each other than do the equivalent adults. And this embryonic similarity giving way to later developmental divergence had a huge impact on him.

At the end of the chapter in Origin of Species in which he discusses it, Darwin says that on the basis of this sort of comparison he would have believed in evolution even if he had not come up with a mechanism to drive it (natural selection).

Here’s a skeletal version of what he says:

“Finally, the several classes of facts which have been considered in this chapter, seem to me to proclaim so plainly, that the innumerable species…have all descended … from common progenitors…that I should without hesitation adopt this view, even if it were unsupported by other facts or arguments.”

The Failures of Mathematical Anti...