How often do we discourage our children from handling dangerous objects--things like matches and knives? Are we protecting them, or failing to let them learn valuable lessons about the world we live in? David F. Lancy, the author of The Anthropology of Childhood, breaks down these questions from an anthropological stance.

Since Margaret Mead’s field studies in the South Pacific nearly a century ago, there has been the tacit understanding that, as culture varies, so too must the socialization of children to become competent culture users and bearers. However, more recently, the work of anthropologists has been mined (using the method of ethnology) to find broader patterns that may be common to childhood across a range of societies (e.g. Lancy 2014). One improbable commonality in the literature has been the tolerance, even encouragement, of toddler behavior that is patently risky, such as playing with or attempting to use a sharp-edged tool. Concerned queries directed at mothers yield two characteristic responses: “that’s the way children learn” and “you can’t really prevent them from doing something they’re set on.” This hands-off method to child-rearing is not only characteristic of most pre-industrial societies, it was probably characteristic of Western society until fairly recently and, in fact, may still be the prevailing attitude in working class and farming families. My favorite illustration of the principle comes from Charles Dickens’ immortal novel Pickwick Papers from 1836. At one point, we hear Sam Weller’s (Mr. Pickwick’s young man-of-all-work) father proudly claim credit for his son’s perspicacity: “I took a good deal o’ pains with his eddication, sir; let him run in the streets when he was very young, and shift for hisself. It’s the only way to make a boy sharp, sir.”

Surveys of the anthropological and historic records show that this hands-off approach to socialization follows from a reliance on children as “self-initiated learners.” The ethnotheory that guides parents’ passive pedagogy acknowledges the child’s inherent need to become competent and to “fit in” or receive social acceptance. I review the major components of this child rearing approach and show how it accommodates to a wide ecological range and to the developmental level and gender of the child. An obvious contrast can be made with contemporary Western views on child rearing which have been heavily shaped by formal schooling or what Rogoff calls the “factory model.” Children and parents very quickly adopt the roles of student and teacher, respectively—almost from birth.

There are two broad and important cross-cultural implications of this phenomenon. First, and not surprisingly, children socialized to become independent, self-initiated learners do poorly in the classroom setting. Camilla Morelli describes Matses children from Amazonia “learning to sit still” in school in contrast to their physically active learning in the jungle and community. Second, that unintended consequences follow from the wholesale adoption of the factory or “adult-led” model of learning found in schools and middle-class homes. These include, but are not limited to: the loss of children’s natural initiative, curiosity and exploration; diminished observation ability and interest in the environment; passivity in the face of new problems encountered and; diminished cooperative and pro-social motivation (e.g. children refusing to do chores). 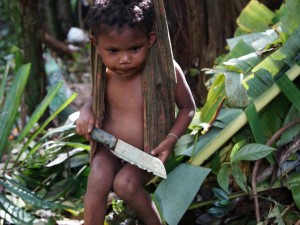 The following scenario is both common in the ethnographic accounts of anthropologists and largely unremarked in the literature on child development and learning. Accompanied by his spouse during his research on childhood among the Dusun in North Borneo, Williams reports:

We were faced daily with Dusun parents raising their children in ways that violated the basic beliefs by which we were raised…We consistently checked our…exclamations of concern or disgust…and [resisted] the temptation to take a “dangerous” object, such as a knife, from a toddler…knowing that in terms of the local culture, children are believed to die from accidents whether they play with knives or not and besides, as one Dusun father put it, “How can you learn to use a knife if you do not use it” (Williams, 1969).

This example is typical of observations made by ethnographers that, collectively, suggest a coherent and cohesive cultural model of culture acquisition. The entire community, starting with the children themselves, shares the expectation that children will want to learn. They will want to become competent and helpful. To do this they need free access to artifacts or tools, and opportunities to observe their use by experts. Instruction or supervision, on the other hand, are not considered necessary and may even be seen as counter-productive. The Hadza say “children will learn on their own what is dangerous” (Marlowe, 2010).

The belief that children learn through their own initiative, and should be granted sufficient freedom to do so, seems to be extremely widespread. It is assumed that they will want to learn the necessary skills to be helpful (Howard, 1970, p. 37). What varies significantly is the age and degree to which that freedom is withdrawn and children are assigned specific chores. Foraging societies grant children a long period of freedom from responsibility while in farming societies, this freedom is voluntarily, or involuntarily, curtailed (Hewlett et al., 2011) as early as five, especially for girls. In many foraging societies, the tasks of hunting and gathering are so physically challenging that bringing children along as novices/assistants adds to a forager’s work-load, rather than diminishing it. On the other hand, pastoral and farming communities readily find child-appropriate chores to transition children into the domestic labor force. A corollary belief is that individuals learn primarily from their own direct experience and that another’s perspective may be misleading. Further, the ethnotheory incorporates the idea that children’s learning should be self-paced.

Another element of the self-initiated learner ethnotheory that can be discerned in the many knife-handling cases, is an assumption that children will voluntarily seek out tools and tool-like objects for opportunities to explore and use them. “[As] they grow up in a world of tool users, tools become part of the developmental world of young hominins” (Jaffares, 2010). Donald (1991) and others have noted that each tool in the society’s tool kit tells a story, it serves as an “external memory store.” Studies of stone tool production sites dating to the Paleolithic show a characteristic pattern that can be decoded for evidence of learning. Discarded flakes and crudely made tools show a novice patiently practicing. Nearby may be the remains of an expert’s tool-making debris, suggesting that the one served as a role model for the other (Dugstad, 2008).

There are two sources that ratify the notion that children can learn to use tools properly by freely manipulating them and, later, using them. First, experimental studies in the West, of children as young as three months, reveal an enormous range of untutored abilities to learn from objects (Bourgeois et al., 2005). A second and very obvious source of validation of the freedom to “play with knives” in small, face-to-face communities is that even very young children quickly become effective tool users. In addition to knives, my survey reveals children as young as three to five successfully using: a hoe to prepare a field for seeding; fishing gear; blowpipe; bow and arrow; mortar and pestle to hull grain; a dugout canoe; and digging stick, among many others.

It is ironic that children who’re readily granted the freedom to learn on their own, and who eagerly seize this opportunity, also willingly relinquish some degree of autonomy in order to pitch in and be helpful. As children acquire mastery, they may experience a “feeling of efficacy” (White, 1959). Further, children are able to translate new, practical skills into social capital. “When the [Buton] child practices angling on the reef flat, he is catching fish that are consumed by [the] household and this serves, at least in part, as his motivation” (Vermonden, 2009).

Paradise, Rogoff, and colleagues have studied the practice, in several indigenous villages in Mexico and Guatemala, of inviting children to learn through joint participation in tasks. This has been characterized as the adult “creating room” for the would-be helper (de Haan, 2001). Children who seek to assist through collaboration are still expected to have spent time learning through careful observation, imitation, and play. For example, the Mayan weavers studied by Greenfield had first learned to weave on a simple “toy” loom (Greenfield, 2004).

Parents not only welcome their help but, as children become proficient, they begin to assign them chores. This is particularly true in agrarian communities with high fertility. For example, the “Giriama attach importance to providing children with duties that teach responsibility and mutuality” (Wenger, 1989). Ultimately, children’s participation in the family economy continues to escalate in terms of time invested and skill level, reaching adult levels of competence, efficiency and sense of responsibility “just in time” to assume the responsibility of family formation.

A recent survey in the US found that for the sixty per cent of women who are employed, taking care of one’s children ranked near the bottom of a preference scale just ahead of housework and commuting (Kahneman et al 2004). Middle–class parents feel “burdened” by their children’s needs (Kremer–Sadlik et al, 2010). One reason for this ennui may be that, from being a reliable helper in the household in nearly all traditional societies, the child has turned into a parasite. There has been a flurry of studies recently on middle–class children’s contributions to the household—or lack thereof. In a long-term study of middle-class families in Los Angeles “no child routinely assumed responsibility for household tasks without being asked…the overall picture was one of effortful appeals by parents for help [who often] backtracked and did the task themselves [becoming, in effect] a valet for the child” (Ochs and Izquierdo 2009). The divide between contemporary, privileged children and their traditional, helpful counterparts has grown extremely wide. Further, it’s not at all clear that our children are necessarily “better off.” “Modern” children have authority—lording it over their Valet parents—but little freedom and no responsibility. By contrast, West African Tallensi children “are remarkably free from over–solicitous supervision…they can go where they like and do what they like [but] are held fully responsible for tasks entrusted to them” (Fortes 1938).

de Haan, M. (2001) Intersubjectivity in models of learning and teaching: Reflection from a study of teaching and learning in a Mexican Mazahua Community. In S. Chaiklin (Ed.), The theory and practice of cultural–historical psychology (pp. 174–199). Aarhus, Denmark: Aarhus University Press.

Dugstad. S. A. (2010). Early child caught knapping: A novice Early Mesolithic flintknapper in south–west Norway. Proceedings from the 2nd International Conference of the Society for the Study of Childhood in the Past (pp. 65–74). Stavanger, Norway: University of Stavanger.

Fortes, M. (1938/1970). Social and psychological aspects of education in Taleland. In J. Middleton (Ed.), From child to adult: Studies in the anthropology of education (pp. 14–74). Garden City, NJ: The Natural History Press.

Jaffares, B. (2010). The co-evolution of tools and minds: cognition and material culture in the hominin lineage. Phenomenology and the Cognitive Science, 9, 503-520.

About the Author: David F. Lancy

David F. Lancy is the author of Raising Children...