W.B. Yeats is widely recognised as one of the greatest poets of the twentieth century.

It has even been suggested that he was the greatest poet in Europe since Virgil. His reputation as a dramatist has been much less certain through the course of the twentieth century however. Yet it is as a dramatist that I came to discover aspects to Yeats that I found surprising, if not startling, over the course of research into the topic during the 2000s.

As part of a series of events to mark the 150th anniversary of Yeats’s birth, Ireland’s national radio broadcasting station, RTE, dedicated their weekly Arts programme, Arts Tonight with Vincent Woods, to the topic of Yeats and the Theatre, on Monday, June 8.

Contributors to the show included myself at Pázmány Péter University Budapest, Prof. Anthony Roche of University College Dublin, and Christopher Fitz-Simon (former Literary Manager and Artistic Director at the Abbey and Peacock Theatres in Dublin). The editor of Penguin edition of the Selected Plays of W.B. Yeats, Richard Allen Cave, spoke of how he came to Yeats’s plays in the first instance at Cambridge University under the tutelage of Yeats scholar T.R. Henn, of the performance history of Yeats’s dance plays, and of his current project for a major new production of Yeats’s play, The King of the Great Clock Tower.

The show also included interviews with Kelly Hughes and Olwyn Fouré on performing and directing Yeats, Olwyn reading beautifully three excerpts from three Yeats plays: The Only Jealous of Emer; The Dreaming of the Bones; Cathleen ni Houlihan.

During the first fifteen years of his life as a writer from his early twenties, Yeats was associated most closely with a movement known as the Celtic Twlight. In the 1880s and the 1890s the character of this movement was evident in such fairy poems as ‘The Stolen Child’ or in the melancholic quality of lyrics like ‘The Song of Wandering Aengus’ and ‘Fergus and the Druid’, drawing on stories from Irish mythology.

Poems like these carry a magical and haunting quality that is strikingly evident in his plays from the 1890s onward. Researching Yeats’s plays, however, I was surprised to discover just how influenced his writing for performance was by the continental European playwrights coming to the attention of English and French audiences in the 1890s. 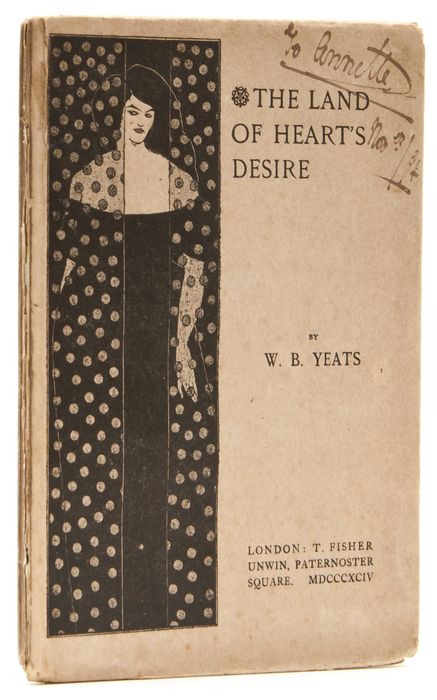 Early edition of The Land of Heart’s Desire by W.B. Yeats.

The first Yeats play to be performed was The Land of Heart’s Desire at the Avenue Theatre in London in 1894. The play was first staged alongside John Todhunter’s A Comedy of Sighs but Todhunter’s play was widely denounced by critics and withdrawn after a week. Yeats’s play continued to be staged, however, along with George Bernard Shaw’s first play, Arms and the Man, running for eleven weeks. As Yeats’s play was running, Winifred Fraser played the role of Hedvig in a single subscription performance of Henrik Ibsen’s The Wild Duck at London’s Royalty Theatre in on 4 May 1894.

Despite the realism of Ibsen’s dialogue contrasting sharply with the poetry of Yeats’s play, the close connection between the work of both playwrights lay in the fact that Fraser was also performing the role of the newly-wedded woman, Mary Bruin, in The Land of Heart’s Desire.

Another important influence on Yeats’s drama was Maurice Maeterlinck.

Yeats had seen Beerbohm Tree’s English-language production of Maeterlinck’s l’Intruse (The Intruder) at the Haymarket Theatre in London in January 1892, read Les Aveugles (The Blind) in 1895, was familiar with Erving Winslow’s 1894 translation of Pelléas et Mélisande, and saw the 1898 London production of this work with Mrs. Patrick Campbell in the starring role.  Claude Debussy wrote a libretto for the operatic version of the latter, performed in 1902.

Maeterlinck’s influence is strongly evident in The Land of Heart’s Desire and the 1899 Dublin performance of The Countess Cathleen. The latter was also heavily influence by the mystical epic play, Axël, written by Comte Villiers de I’Isle-Adam. Yeats attended a performance of this play in 1894 with Maud Gonne in Paris. An Irish version of the Faustian legend, the Countess Cathleen sells her souls to demons to prevent the poor who are starving on her land from doing so in exchange for gold.

During the course of the discussion on Arts Tonight, I pointed out how significant new movements in European avant-garde theatre were to Yeats from the 1900s to the 1930s. Yeats had first encountered French Surrealist theatre when he attended Alfred Jarry’s Ubu Roi at the Théâtre d’Oeuvre in Paris in December 1896. Although he felt a sense of sadness at the time, we can still see the farcical and fantasy aspects of Surrealism in some of his later plays. These include the second of his Cuchulain plays – based on the most famous Irish mythical warrior – The Green Helmet of 1908 and The Player Queen, first performed in London by the Stage Society in 1919 and first published in the famous modernist literary journal, The Dial, in 1922, alongside the most far-reaching poems of English modernism, T.S. Eliot’s ‘The Waste Land’.

Yeats was also alert to German Expressionist Theatre in the 1910s and the 1920s. Oskar Kokoschka’s notorious play, Murderer, Hope of Woman provoked outrage upon its first performance in Vienna 1909. Kokoschka was an important influence on the painting of Jack B. Yeats and the Expressionist features of stationdramen and schreidramen are evident in Yeats 1916 Cuchulain play, At the Hawk’s Well, performed in London in 1916.

The two most important figures in the European avant-garde for the later drama of Yeats were the Italian Absurdist playright, Luigi Pirandello, and the German Expressionist, Ernst Toller. Yeats was strongly aware of Pirandello’s work through performances by the Dublin Drama League on Sunday nights at the Abbey Theatre in the 1920s as well as through the extensive periods that he spent at Rapallo Italy in that decade. Although he had already seen a production of Toller’s Masses and Man by the Dublin Drama League in 1926, it was not until he received a gift from Ethel Mannin of Toller’s Seven Plays, published in English in 1935, that he became drawn to Toller’s work. 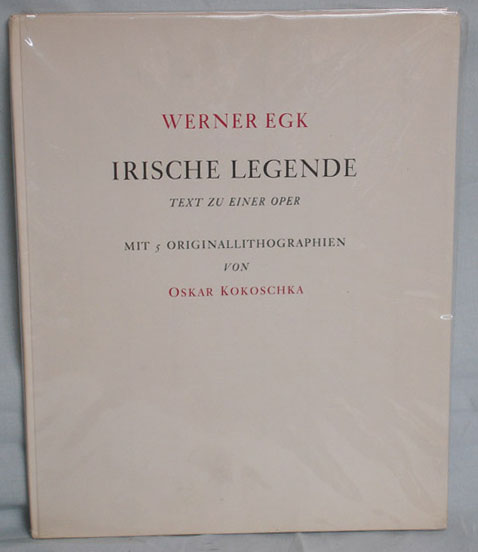 Werner Egk’s ‘Irische Legende’ – an opera based on Yeats’ The Countless Cathleen.

Evidence of a growing appreciation of the importance of Yeats’s drama to European modernist theatre, the ‘Crescendo’ theatre company produced together At the Hawk’s Well, Calvary and the Cat and the Moon in Sirály Theatre House, Budapest, April 2009. In May 2011 an experimental version of Yeats’s The Shadowy Waters was performed in French as Les eaux d’ombre at the Théâtre de la Vallée de l’Yerres á Brunoy in Paris.

One of the most intriguing and least known adaptations of Yeats’s drama took place in Salzburg in 1955. This was an opera composed by Werner Egk that was based on Yeats’s The Countess Cathleen, under the title Irische Legende. The influence is strongly Wagnerian, a reminder of the significance that Wagner had for Yeats in the 1890s and 1900s.

Egk may have been drawn to the play in an attempt to deal with the darkness of the Nazi era in Germany and his own complicity through the performance of his operatic version of Peer Gynt for the Nazi regime in 1938. The publication of Irische Legende by Klemm Verlag in 1955 also include five lithographs by Oskar Kokoschka based on scenes from Yeats’s play.

Following the success of Gerald Barry’s opera version of Wilde’s The Importance of Being Earnest at the Barbican, London, in 2012, there is a compelling case for a new opera version of The Countess Cathleen.

About the Author: Michael McAteer

Dr. Michael McAteer is author of Yeats and European Drama (2010). He is an Associate Professor at the Department of English, Pázmány Péter Catholic University, Budapest. He taught at the School of English, Queen’s University Belfast, from 2002 to 2012. He specialises in modern Irish literature....