The Power of Definitions

Last Friday, Douglas Walton and Fabrizio Macagno, wrote about arguing with language in their book Emotive Language in Argumentation. This week, they delve into the way definitions raise the argumentative stakes--particularly at trial.

Words can be used to elicit specific argumentative effects. However, by altering the meaning of such words by modifying their definitions, it is possible to affect or even manipulate the interlocutor’s attitude. To illustrate how definitions matter, it is useful to take into account the legal context, in which the argumentative effect of a term corresponds to its legal consequences. In this context, definitions are constructed for legal purposes, and can be binding in a trial even though they can be questionable and subject to a counterargument. The following fictional case, known as Regina v. Ojibway, was constructed by two law students. It is a parody, but a useful example to show in outline how arguments about definition work in trials.

Fred Ojibway, an Indian, was riding his pony through Queen’s Park on January 2, 1965. Being impoverished, and having been forced to pledge his saddle [to repay a debt], he substituted a downy pillow in lieu of the said saddle. On this particular day the accused’s misfortune was further heightened by the circumstances of his pony breaking its right foreleg. In accord with the Indian custom, the accused then shot the pony to relieve it of its awkwardness.

In this case the accused was charged with violating an act stating that anyone maiming, injuring or killing birds is guilty of an offence and subject to a fine. How was this peculiar decision arrived at? It was based on the definition in a statute. The statute defined a ‘bird’ as a two-legged animal covered with feathers. The lame horse covered by the down pillow, it was argued, fits the definition of a small bird for two reasons. First, it was covered with feathers. Second, since having two legs was taken to be only the minimum standard, an animal that has four legs can also be included as an animal that has two legs. It follows legally, it was argued, that Fred had killed a bird and broken the law. Fred was found guilty.

Opposing counsel argued that an expert had said that the animal was a pony and not a bird. But it was counter-argued that it is not the issue whether the animal was in fact a bird or not, but whether it is one in law. Opposing counsel argued that the iron shoes found on the horse disqualify it from being a bird, but counter-argued that how an animal dresses is of no concern to the court. These ingenious arguments pro and con were put forward, but the judge gave the reason for his judgement that a horse with feathers on its back must be deemed a bird for the purposes of the statute. One moral of the story seems to be that once a legal definition is set in place, it may prove hard to argue against it, even though pro and con arguments are duly considered.

Of course, this case is only a parody, but it reveals a lot about legal definitions and shows how they are in many instances far from trivial. A trend widely commented on in recent American trials is that overzealous prosecutors are stretching definitions to secure convictions. The following case has attracted considerable attention. When a Marine official boarded the fishing boat of John Yates of Florida, he found that Yates had caught more than 3,000 red groupers. The inspector measured every one of these fish and found 72 that he took to be under the minimum size allowed. However, when the boat docked, inspectors did a recount and came up with a finding of only 69 undersized groupers. Yates was charged for having violated fishing conservation rules. But three years later, a federal prosecutor in Florida charged Yates with violating the Sarbanes-Oxley Act,, which declares that anyone who “knowingly alters, destroys, mutilates, conceals, covers up, falsifies or makes a false entry in any record, document or tangible object” to cover something up has committed the crime of obstructing an investigation. To fit the requirements of the act, throwing away the three groupers was classified as if it were the shredding of a document designed to destroy or mutilated in order to falsify evidence. To many, this ruling looks like a case where the terminology of the crime of obstructing an investigation is being interpreted in such a broad and flexible way that it gives prosecutors too much power and defendants too little room to defend themselves.

The basic structure of the argumentation in this case is shown in the argument map displayed in figure 1. 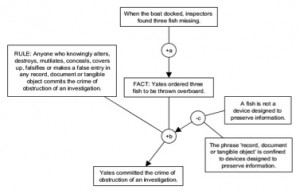 A pro argument is indicated by a plus sign in its argument node. A con argument is indicated by a minus sign in its argument node. The argument labeled +a is a typical legal argument of a kind that draws a conclusion by inference from a factual statement and a rule. The argument +b offers evidence supporting the alleged factual statement that Yates had ordered three fish to be thrown overboard. The con argument -c attacks the lower pro argument.

The legal question at issue is whether the fact fits the rule. To make this determination an adjudicator, such as a judge, has to go through all the clauses of the rule to see whether the alleged fact about throwing fish overboard fits these clauses. To make this determination, consideration must be given to the meanings of each of the terms that occur in the clauses of the rule. Does throwing fish overboard fit the definition of knowingly altering a document? Does it fit the definition of making a false entry in a record? Does it fit the definition of covering up a tangible object? To answer these questions, some account has to be given of how each of these terms is legally defined. In the absence of any specific definitions given in legal sources such as statutes or previous cases, the ordinary meaning of the term in natural language may have to be taken as the criterion. Arguments were put forward supporting this interpretation by one side and contested by the other side using counter-arguments, as shown in figure 1.

When the case came to the Supreme Court, the basic issue turned out to be how the courts should interpret the term ‘tangible object’ according to this Sarbanes-Oxley rule. Yates’ defense lawyer began by arguing that the natural meaning of the expression ‘record, document or tangible object’ refers only to devices designed to preserve information. Many other pro and con arguments ensued. Some of them concerned the legal consequences of applying this rule to this case. Justice Antonin Scalia in his commentary even asked the question ‘What kind of mad prosecutor would ask for twenty years in prison for destroying fish?’ (referring to the maximum prison term for this crime). A transcript of the trial proceedings can be found here.

About the Author: Douglas Walton

Douglas Walton is the co-author of Emotive Language in Argumentation....

About the Author: Fabrizio Macagno

Fabrizio Macagno is the co-author of Emotive Language in Argumentation...