Things That Go Bump in the Night

A Brief History of Halloween

Our Cambridge Library Collection publisher Caroline M. explores the history of everyone's favorite October holiday—it's not just American commercialism, but a celebration steeped in European tradition as the "Eve of All Hallows."

In December 2013, I tried to persuade you, in a piece on Christmas books, that Dickens and Prince Albert between them did not invent the ‘traditional’ Christmas. I now embark on a much more difficult task, in arguing that Hallowe’en was not invented in the United States! In the UK, as tinselly spiders and paper pumpkins begin to festoon the shops in late August, we grumble and mutter about another American-derived excuse for making people buy unnecessary tat, forgetting that the feast of the Eve of All Hallows has a very ancient history in the British Isles. 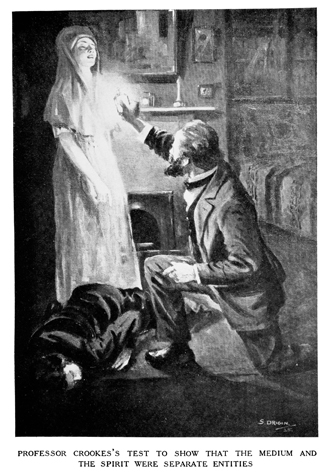 Sir William Crookes attempts to prove that the medium and the spirit manifestation are two separate entities. From The History of Spiritualism, by Sir Arthur Conan Doyle.

The Christian festival of All Saints, on 1 November, commemorates the saints and martyrs. On the following day, All Souls, prayers are said for all the faithful departed. The evening before – the vigil of the feast, All Hallows Eve – traditionally involved the driving away of the forces of Satan before the celebration of the holy dead on the following two days.  In his Observations on Popular Antiquities, first published in 1777, which we have reissued in the updated two-volume version of 1813, John Brand (1744–1806), secretary of the Society of Antiquaries, collected folklore and tales from all over Britain and Ireland, and has a large section on the beliefs and rituals associated with Hallowe’en.

The festival has long been associated by anthropologists with the Celtic Samhain, which marks the end of the harvest season and the beginning of winter. Brand refers to ‘the Oidhche Shamhna or Vigil of Saman’ in Ireland, and there are other references from the ‘Celtic fringe’ of Britain: in the isle of Lewis, for example, a cup of ale was poured into the sea for the god Shony, in (it was hoped) exchange for good fishing in the following months. In the now abandoned island of St Kilda, the inhabitants baked a large triangular cake, which had to be eaten up in the course of the night. ‘Soul-cakes’ (more like spiced biscuits) were a seasonal treat in many parts.

Some of Brand’s examples come from Thomas Pennant’s Tour in Scotland (1771), which we have reissued. All Hallows Eve was the time when girls resorted to nuts, hemp-seed, kale-stalks or cabbages as ways of foretelling who their future husband would be. And the tradition of bobbing for apples in a bowl of water, or dangling from strings, which is not yet completely dead, was widespread across the whole country.

European settlers in America must have taken some of these traditions with them, but it is perhaps surprising that Hallowe’en survived as a popular celebration, given the violent opposition of the Puritan immigrants to anything involving witchcraft and other superstitions, like Christmas. The celebration of the Day of the Dead in Catholic tradition presumably merged with the northern European heritage to create a uniquely American festival, with its own traditions such as pumpkin-carving. (In Europe, the lanterns were originally made from hollowed-out turnips – with much less opportunity for artistry!) 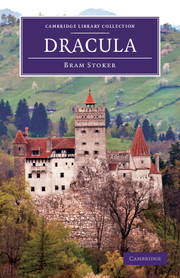 The cover of the CLC reissue of the first edition of Dracula.

One of the more unusual books in the Cambridge Library Collection series on Spiritualism and Esoteric Knowledge is The Inanity and Mischief of Vulgar Superstitions: Four Sermons, Preached at All-Saint’s Church, Huntington in the Years 1792, 1793, 1794, 1795. These sermons have an unusual origin. There was a famous witch trial in 1593, which led to the execution of the Samuels family of Warboys in Huntingdonshire. Sir Henry Cromwell (grandfather of Oliver Cromwell) used the family’s confiscated property to fund an annual sermon against witchcraft to be given in Huntingdon by a divinity scholar from Queens’ College, Cambridge.

Although beliefs about witchery had changed by the eighteenth century, the tradition persisted. Martin J. Naylor (c.1762–1843), a Fellow of Queens’ College and the holder of incumbencies in Yorkshire, gave four of the sermons, on 25 March each year from 1792 to 1795. Although he called the subject ‘antiquated’, he hoped his ‘feeble effort, levelled against the gloomy gothic mansion of superstition, may not be entirely without a beneficial effect’. So sermons originally intended to be preached against the evils of witchcraft had in two hundred years become a lesson in not believing in witchcraft in the first place.

However, at the same time, sensational or ‘Gothic’ novelists were introducing ghosts and ghouls into their works. Mrs Radcliffe and other ‘Gothic’ novelists attempted to make their readers’ flesh creep, and even Jane Austen (in Northanger Abbey), and Charlotte Brontë (in Villette) made use of the genre, though in both cases there was a rational (and in Austen’s case, comic) rationalisation of the experience. 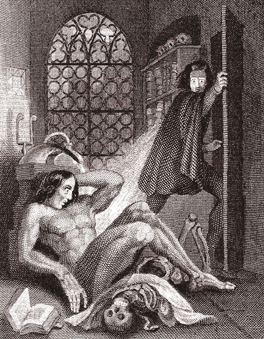 In 1816, the famous evening of reading ghost-stories took place which resulted in Mary Shelley’s Frankenstein; another, less well known outcome was the creation of The Vampyre, by Byron’s doctor, John Polidori. Vampirism of course reached its apogee with the publication of Bram Stoker’s Dracula in 1897. Meanwhile, Charles Dickens used to enjoy sessions of crystal-ball reading with his friend Chauncy Hare Townshend, who had written a book on Mesmerism. (The crystal ball itself can still be seen at the Wisbech and Fenland Museum in Cambridgeshire.)

In the later nineteenth century, renewed interest in the occult led to the rise of spiritualism, and the huge celebrity of ‘mediums’ such as D.D. Home and Eusapia Palladino (the latter famously unmasked as a fraud at a meeting of the Society for Psychical Research in Cambridge). What may seem strange is that so many serious men, including scientists, took psychical research so seriously: Henry Sidgwick, Alfred Russel Wallace, Sir William Crookes, Lord Rayleigh, and Sir Oliver Lodge were all involved in investigations, as well as the pioneering psychologist Edmund Gurney. Sophia de Morgan, wife of the mathematician Augustus, and a social reformer who campaigned for women’s education and animal rights, also spent several years investigating psychic claims, even having a medium as a house guest/subject of research. 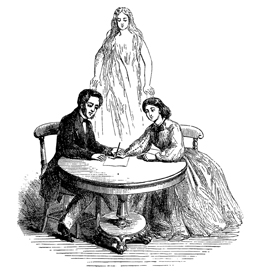 A spirit materializes. From Sophia de Morgan’s From Matter to Spirit.

Perhaps the most unlikely convert to spiritualism was Sir Arthur Conan Doyle, creator of the ultimate rationalist investigator Sherlock Holmes, who later wrote a two-volume history of spiritualism, was duped by the photographs of ‘fairies’ faked up by two Yorkshire schoolgirls, and fell out with his friend Harry Houdini over the latter’s relentless debunking of his beliefs.

Some mediums produced best-selling books on their experiences, with intriguing titles such as Ghost Land, or Researches into the Mysteries of Occultism (1876), or Lights and Shadows of Spiritualism, while others, such as Stuart C. Cumberland, who was famous for his mind-reading skills, were concerned at the possibilities for fraud and financial profit, while P.T. Barnum, the famous showman, and Houdini both weighed in on the side of complete scepticism.

In the twenty-first century, interest in ghosts, ghouls and the occult shows no signs of going away. So, whether you trick-or-treat, bob for apples, pour beer into the sea, hold a séance, or bake soul-cakes, have a Happy Hallowe’en!

About the Author: Caroline M.

Caroline is the publisher of the Cambridge Library Collection. Check out her blog here....