Alastair Horne, Communities And Social Media Manager, reports from Day One of the 2014 Frankfurt Book Fair.

The Frankfurt Book Fair remains one of the most important dates in the book trade calendar, as publishers from around the world meet up to sign rights deals, meet possible partners, and keep up to date with industry developments.

Though most attendees spend their time in back-to-back meetings, the Fair also hosts a considerable number of talks, seminars, and panel sessions, where industry experts share their expertise and explore the challenges facing the business. Cambridge has been well represented in these sessions this year, with speakers in four key discussions on Open Access, mobile, apps, and social media. 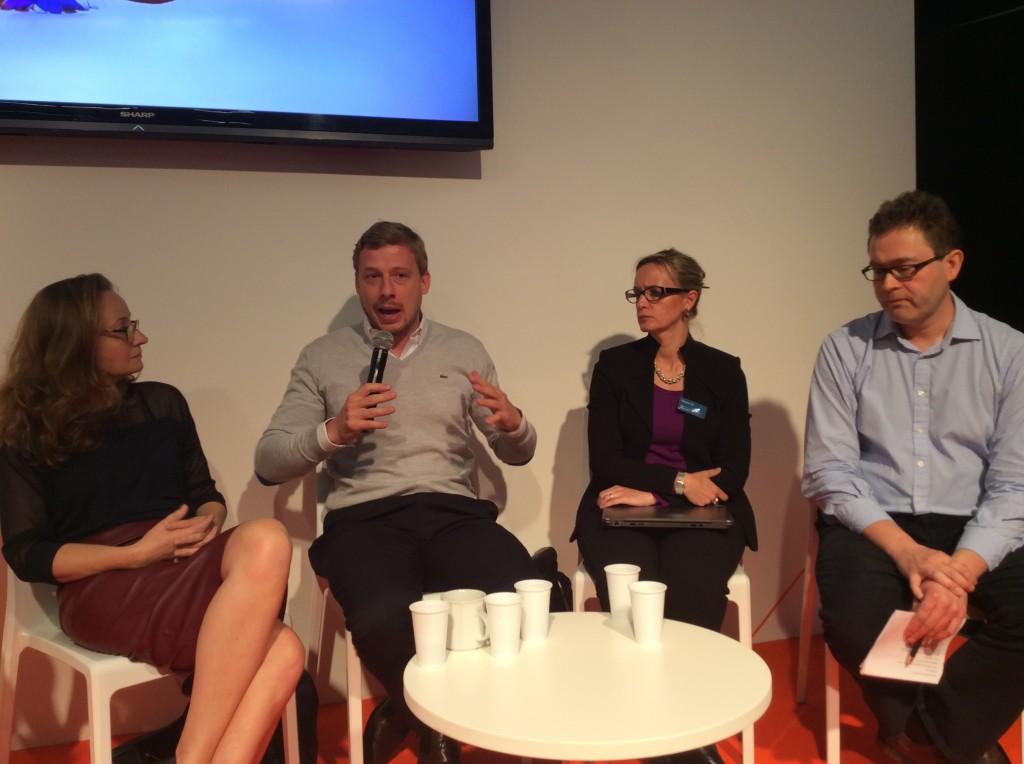 What is a Publisher now?

On the first day of the Fair, Mandy Hill, newly appointed MD for Academic, and Carla Aerts, Global Digital Director for Education, could be found on well-attended panel discussions considering the future of the industry.

“What is a publisher now?” asked the title of Hill’s session, which focused on the opportunities available for publishers in the post-Open Access era.

Speakers from Nature, Macmillan’s Digital Science division, and former start-up Mendeley, now owned by Elsevier, considered how established brands like Cambridge can adapt to the new realities of Open Access publishing, where the costs of publication are supported not by libraries and other institutions buying subscriptions, but by the authors of research, and their supporting institutions.

Hill pointed out that Open Access had made publishers re-engage with the customers they served. Increasingly, publishers were shedding entrenched attitudes that “This is how we publish”, and were renewing their focus on assisting their audience. Though there were considerable risks involved – refusing to adapt to change could be as dangerous as making the wrong change – publishers who got this right would continue to deserve their place within the academic ecosystem.

To do so, publishers would need to consider their customers’ needs on a case by case basis, though – what was appropriate for one journal might not work for another, and while open access might be the new normal in STM publishing, that was much less the case in the humanities and social sciences.

As the publisher of a great many historic journals, Cambridge University Press was looking closely at what a journal brand now meant in this new world, Hill said, and it meant much more than publication. The panel agreed, noting that services supporting researchers would be an increasingly important part of publishers’ responsibilities in future.

On Wednesday afternoon, Carla Aerts joined a panel exploring the challenges of publishing for mobile phones, alongside representatives from Macmillan, subscription service Scribd, and Publishing Technology, whose survey on mobile reading habits formed the starting point for discussion. 45% of people in the US or UK claimed to have read at least part of a book on their phone in the past year, and two thirds of these had read more this year than last, so the outlook was promising for mobile publishing.

Aerts explored the challenges involved in publishing educational content for mobile. Getting the pedagogy to work for small screens can be difficult, she said – what tended to work best were revision quizzes that provided feedback on the mistakes learners made, particularly if it pointed them back to the relevant content in their text books.

Carla also pointed to the success of initiatives in Africa in using mobile phones to improve literacy through mobile phones, particularly by getting local language readers installed onto children’s feature phones. And in the private sphere, an African start-up company called Bookly had already 750,000 users across Africa, using micropayments to generate revenues.

The next few days will continue to see the Press represented on discussion panels. This afternoon, Carla will be speaking about the challenges involved in app development, in a session entitled “Apps – Cash Cow or Bottomless Pit?” And tomorrow, I’ll be considering the role of social media in book marketing, under the heading “Social Media – Marketing Heaven or Hell?”