The Crossroads of Fate and Character

An Interview with Mark Richardson

Mark Richardson of Doshisha University and the author of Robert Frost in Context says there will always be a place in this world for poetry as long as humans continue to be their imperfect selves. His research on popular American poet Robert Frost underscores that intentions in life can sometimes have little influence on end results. 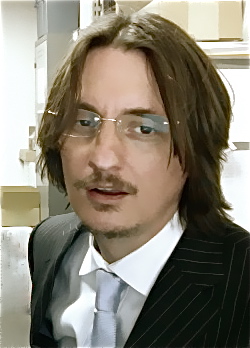 What led you to your current field of study?

Several casual, inadvertent suggestions made by others led me along. I entered college having given no thought, really, to what I might study. I took courses in audio-engineering (such as they were); I’d played rock & roll with some friends in high-school, and had been a percussionist in the school bands since I was twelve. I attended the University of South Carolina because it was the state school and several friends were already there. Sometime, whether in my first or second year, I can’t recall, I took a course in literature required of all students, in this case on modern poetry. Ennis Rees, the man who taught it (whom I never spoke to), read poetry aloud very well. I’d never heard anyone do that before. Some lines from a poem by A.E. Housman he read aloud I still have by heart without having tried to (“Many a peer of England brews / Livelier liquor than the muse, / And malt does more than Milton can / To justify God’s ways to man,” etc.). I was struck, and I drifted into the Department of English, which suited me well. Toward the end of my time there, a professor (David Cowart) whom I and some friends used to joke around with, asked me what I intended to do when I graduated. I said I didn’t know. He suggested I go to graduate school in English literature. I asked him where. Rutgers University, came the reply. All I really understood about the school was that it was near New York, where I wanted to spend time (from having listened to the Velvet Underground). So I went to Rutgers as much for where it was as for what it was. But once there, I fell in with a remarkable cohort of friends and fellow graduate students, got to know Richard Poirier, and, through him, worked part-time doing textual research for the Library of America in New York. When the time came to write a dissertation, I had in mind something to do with Hawthorne. In conversation with Poirier about it one day, he said: “Someone needs to do a critical edition of Frost’s prose.” Sounded like a good idea to me. So I did that, and also wrote a monograph on the poet. This work resulted in Robert Frost: Collected Poems, Prose, and Plays (New York: Library of America, 1995), which I co-edited with Poirier; The Ordeal of Robert Frost: the Poet and the Poetics (Champaign-Urbana: University of Illinois Press, 1997); and (much later) The Collected Prose of Robert Frost (2007), which I edited for Harvard University Press, by which time I was also involved in editing the poet’s letters. Harvard issued The Letters of Robert Frost, Volume 1: 1886-1920 this February. I worked on that with Donald G. Sheehy and Robert Faggen. I’m working on the three volumes to come with Don Sheehy, Robert Bernard Hass, and another scholar based here in Japan, Henry Atmore, professor of English at Kobe City University of Foreign Studies. All the scholars just named contributed to Robert Frost in Context (Cambridge, 2014). I should add that nine of the essays in that book were written by scholars based in the Kansai area, the aforementioned Henry Atmore, Mark Scott (Nara Women’s University), and, at Doshisha University, David Chandler, Yasuko Shiojiri, and me.

What is unique about Frost? What is the most important thing about Frost for you?

I’ll try to answer both questions at once. What I stumbled on, in writing The Ordeal of Robert Frost,​ is a proposition: Frost’s poetics, and his way of thinking about life, come to the same thing, and it amounts (as I see it) to a “tragic” view of human affairs, in which a person’s fate and character merge. Frost says, in an early poem, that “life has for us on the wrack / Nothing but what we somehow chose.” All the mystery lies in the “somehow.” In the poetics, this idea takes a happier, if nonetheless mysterious, form: writing (Frost says) makes us aware of things we didn’t know we knew. A poet’s intentions are not expressed in writing; they are revealed—and yet he must own them as having “somehow” been his all along.

Frost’s thinking became my own, as to whatever ordeals I’ve endured, but also as to how I wound up a scholar and professor of English—and in Kyoto—without ever having thought, on any day, or at any hour that I can recollect, that that was what I either wanted or intended to become, or where I might like to live. Decisiveness and indecisiveness, step-carefulness and step-carelessness, are often perfectly indistinguishable in experience: Frost gets that right. Only later do intentions we somehow had, and decisions we somehow made, become apparent to us; and then we must own them up. This thing of darkness I acknowledge mine, says Prospero in another connection, when his revels now are ended. But so is it also with things of light.

I have a good deal of sympathy with the men and women I work with, as their junior and senior years come round with all that mad, frenetic job hunting. It strikes me that a great many young people here are made to commit themselves awfully quickly, and too deliberately. No one ever asked me, in any way that forced the issue, what I wanted to do with my life when I entered college, and made my way through it. And even beyond college. I’m not sure what I’d have done if anyone had asked in such a way as to force the issue. As Ralph Waldo Emerson says, in “Circles”: “The way of life is wonderful: it is by abandonment.”

Why was Frost so well received in his lifetime?

He never saw fit to condescend to anyone in his poetry, and for the most part (if I may put it this way) had a “democratic” sense of its uses and satisfactions. Readers repaid that great compliment.

What were his most important influences?

William James, Charles Darwin, Henry David Thoreau, Emerson, and (though this may sound glib) the whole of English lyric poetry, in which he was steeped by the time he was thirty. Add to that his readings in Latin and Greek antiquity (especially Lucretius, Catullus, and Virgil), and you have the story as best I can recap it.

But I mustn’t stay altogether on the book side of things. It would be hard to overstate what his wife Elinor Miriam White meant to him, as a man and as a poet (the children they bore, too). Second in line on the personal side stands his mother Isabelle Moodie Frost, a native of Scotland (Frost’s father died in 1885 when the poet was eleven). Frost is so intimately associated with rural New England that we must always remind ourselves that he was (largely) raised by a Scottish-born mother either in or near big cities: San Francisco, from 1874-1885, and, after that, in or near the heavily industrial city of Lawrence, Massachusetts (near Boston). Frost was twenty-six before he ever lived on a proper farm.

Are poets an endangered species?

Not at all. If anything, at least in America, they are too much with us, owing to the proliferation of MFA programs, writers’ conferences, little magazines and out-of-the-way presses that specialize in poetry; they are with us also in that amalgam of Beat and hip-hop that gave rise to “slam poetry,” which is hard to steer clear of even if one wants to (as I generally do). Contemporary American poetry is so populous an enterprise that I more or less hold to the two or three poets I find most agreeable, Frederick Seidel chief among them.

Where is a good place to start for people who are new to Frost?

Why not begin with his second book, North of Boston, published in London in 1914? After all, we are in the book’s centenary year. There’s perhaps more of interest to us as men and women (not as students or English majors) in North of Boston than in any of Frost’s other books, notwithstanding how astonishingly good those other books are. Not for nothing did Frost dedicate North of Boston to his wife as follows: “To E.M.F.: This Book of People.”

What do you see as the future of poetry?

Poetry will get along with any prognostications of mine. I’d attend more closely to the general upheavals in the publishing industry; follow them (and where shall they lead?) and you’ll doubtless see something of what forms poetry will assume, at least as a published artifact.

Rudyard Kipling once suggested that the first sentence ever uttered by anyone in our species must have been a lie. Which is also to say that the first speaker in our species must have been a poet. That’s extravagant, but what I mean is this (Frost insisted on the point): so much of our talk goes by indirection, hint, metaphor, play, mischief that we are all of us too much poets to come out and say what we mean—if we really know what we mean. So long as that’s true of our kind—it will never not be true—we’ll have poetry.

W.E.B. DuBois, Frederick Douglass, and (in the essays more than the fiction) James Baldwin. You’ll learn more about America from reading Baldwin’s (very brief) The Fire Next Time (1962) than from reading any other book I might name. The same goes for DuBois’s 1903 masterpiece, The Souls of Black Folk.

But setting my native country aside, I’d have to place Thomas Hardy (for the poetry) above most writers in my esteem. Something about his bleak way of taking the world (and he’s hardly without humour) seems almost too perfectly satisfying. And who could do without Shakespeare’s Hamlet, Macbeth, and Henry IV, Parts 1 & 2?

How is Frost most relevant to today’s world?

“Relevance” strikes me as a court-room and classroom term of art. I’d ask: Do men and women still fool around with one another? Do they make love and mischief in equal parts (and for good and ill, and at the same time)? Are they subject to Time? Do they enjoy putting things across, scoring, performing? Are they given to self-deception and deception? The yeas have all those questions, by my count, and so long as we fall out this way, we’ll fall in with Frost and the better sort of poets, who are very much on the record.