Into the Intro: Knots and Borromean Rings, Rep-Tiles, and Eight Queens

The Paradox of the Unexpected Hanging

Explore the paradox of the unexpected hanging in this exclusive excerpt from Knots and Borromean Rings, Rep-Tiles, and Eight Queens, a new collection of Martin Gardner's writing on classic puzzles and games.

The Paradox of the Unexpected Hanging

“A new and powerful paradox has come to light.” This is the opening sentence of a mind-twisting article by Michael Scriven that appeared in the July 1951 issue of the British philosophical journal Mind. Scriven, who bears the title of “professor of the logic of science” at the University of Indiana, is a man whose opinions on such matters are not to be taken lightly. That the paradox is indeed powerful has been amply confirmed by the fact that more than 20 articles about it have appeared in learned journals. The authors, many of whom are distinguished philosophers, disagree sharply in their attempts to resolve the paradox. Since no consensus has been reached, the paradox is still very much a controversial topic.

No one knows who first thought of it. According to the Harvard University logician W. V. Quine, who wrote one of the articles (and who discussed paradoxes in Scientific American for April 1962), the paradox was first circulated by word of mouth in the early 1940s. It often took the form of a puzzle about a man condemned to be hanged.

The man was sentenced on Saturday. “The hanging will take place at noon,” said the judge to the prisoner, “on one of the seven days of next week. But you will not know which day it is until you are so informed on the morning of the day of the hanging.”

The judge was known to be a man who always kept his word. The prisoner, accompanied by his lawyer, went back to his cell. As soon as the two men were alone the lawyer broke into a grin. “Don’t you see?” he exclaimed. “The judge’s sentence cannot possibly be carried out.”

“Let me explain. They obviously can’t hang you next Saturday. Saturday is the last day of the week. On Friday afternoon you would still be alive and you would know with absolute certainty that the hanging would be on Saturday. You would know this before you were told so on Saturday morning. That would violate the judge’s decree.”

“Saturday, then is positively ruled out,” continued the lawyer. “This leaves Friday as the last day they can hang you. But they can’t hang you on Friday because by Thursday afternoon only two days would remain: Friday and Saturday. Since Saturday is not a possible day, the hanging would have to be on Friday. Your knowledge of that fact would violate the judge’s decree again. So Friday is out. This leaves Thursday as the last possible day. But Thursday is out because if you’re alive Wednesday afternoon, you’ll know that Thursday is to be the day.” 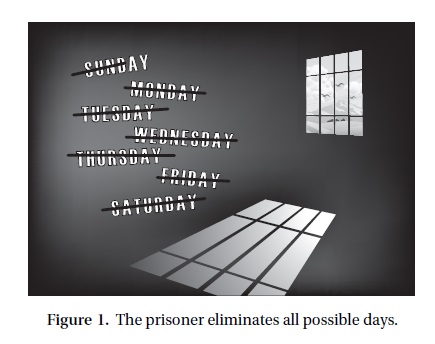 “I get it,” said the prisoner, who was beginning to feel much better. “In exactly the same way I can rule out Wednesday, Tuesday and Monday. That leaves only tomorrow. But they can’t hang me tomorrow because I know it today!”

In brief, the judge’s decree seems to be self-refuting. There is nothing logically contradictory in the two statements that make up his decree; nevertheless, it cannot be carried out in practice. That is how the paradox appeared to Donald John O’Connor, a philosopher at the University of Exeter, who was the first to discuss the paradox in print (Mind, July 1948). O’Connor’s version of the paradox concerned a military commander who announced that there would be a Class A blackout during the following week. He then defined a Class A blackout as one that the participants could not know would take place until after 6 p.m. on the day it was to occur.

“It is easy to see,” wrote O’Connor, “that it follows from the announcement of this definition that the exercise cannot take place at all.” That is to say, it cannot take place without violating the definition. Similar views were expressed by the authors of the next two articles (L. Jonathan Cohen in Mind for January 1950, and Peter Alexander in Mind for October 1950), and even by George Gamow and Marvin Stern when they later included the paradox (in a manto- be-hanged form) in their book Puzzle Math (Viking, 1958).

Now, if this were all there was to the paradox, one could agree with O’Connor that it is “rather frivolous.” But, as Scriven was the first to point out, it is by no means frivolous, and for a reason that completely escaped the first three authors. To make this clear, let us return to the man in the cell. He is convinced, by what appears to be unimpeachable logic, that he cannot be hanged without contradicting the conditions specified in his sentence. Then on Thursday morning, to his great surprise, the hangman arrives. Clearly he did not expect him. What is more surprising, the judge’s decree is now seen to be perfectly correct. The sentence can be carried out exactly as stated. “I think this flavour of logic refuted by the world makes the paradox rather fascinating,” writes Scriven. “The logician goes pathetically through the motions that have always worked the spell before, but somehow the monster, Reality, has missed the point and advances still.”

In order to grasp more clearly the very real and profound linguistic difficulties involved here, it would be wise to restate the paradox in two other equivalent forms. By doing this we can eliminate various irrelevant factors that are often raised and that cloud the issue, such as the possibility of the judge’s changing his mind, of the prisoner’s dying before the hanging can take place, and so on.