Lessons from the Past

Clive Oppenheimer, author of Eruptions That Shook The World (2011), talks us through the importance of studying historical eruptions, and how it can save thousands of lives.

Twenty years ago, an eruption hundreds of times larger than the recent outbursts in Iceland or Chile covered much of Southeast Asia in ash.
It also changed global climate for the next three years. Its legacy is still being studied and provides many lessons to help us prepare for future volcanic disasters and global warming.

We haven’t had erupting volcanoes in the UK for about 60 million years. That’s probably why it came as a shock when Grímsvötn and Eyjafjallajökull reminded us that you can live a long way downwind from a volcano and still be affected by it. But the two recent Icelandic eruptions were puny compared with what volcanoes can do.

Thousands of lives were saved, and the timely response is widely seen as one of the successes of coordinated volcanological and civil protection work.

So it’s worth thinking back twenty years, when an unknown volcano in the Philippines burst to life, producing the largest eruption on Earth in living memory.

The first thing to say about Mount Pinatubo is that before it reawakened it was not known to science as a potentially active volcano. And yet it is only about 90 kilometres northwest from Manila, home to around 20 million people.

It had even been drilled into as part of a geothermal exploration programme (its underground fluids were found too corrosive to exploit). Its colossal ejection of ash, pumice and gas on the 15th June, 1991, reminds us that the largest future eruptions might well rip apart volcanoes that even volcanologists don’t know about. 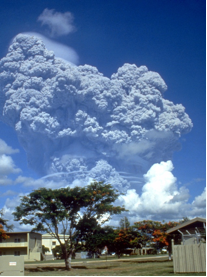 Pinatubo clearing its throat ahead of the 15th June eruption, seen from Clark Air Base. Photo: Rick Hoblitt / USGS.

But the Pinatubo episode tells us so much more – about disaster management, climate change, ecological disturbance and landscape recovery. Many hundreds of scientific papers have reported on its short- and long-term effects, and new work continues to be published.

The lessons resonate today: in our preparedness for volcanic disasters and in research on climate control.

The first signs that Pinatubo was coming back to life were apparent only a few months before the climax.

No systematic volcanological work had been carried out previously. So, the scientists had to discover as much as they could about the history of the volcano in a very short time.

A team of ‘volcano cowboys’ from the US Geological Survey flew out to Clark Air Base, a US military post just 20 kilometres east of Pinatubo. They worked alongside their Filipino colleagues, installing devices to measure earthquakes, gas emissions and the subtly changing shape of the volcano – all of which could provide clues to the likelihood, timing and size of an eruption.

They also reconnoitred ancient deposits around the volcano to assess what kind of eruption to expect. This monitoring effort indicated that a major explosive eruption was imminent and up to 75,000 people were evacuated.

Thousands of lives were saved, and the timely response is widely seen as one of the successes of coordinated volcanological and civil protection work.

The denouement came on the afternoon of the 15th June – ash blasted up to the stratosphere in a nuclear bomb-like mushroom cloud that was grew to an area the size of France.

Within a matter of hours, ten billion tonnes of pumice had been pumped into the air and down the flanks of the volcano.

Within 10 kilometres of the volcano everything was devastated. Much of Southeast Asia was veneered with ash.

Without for the network of Volcanic Ash Advisory Centres set up in the 1990s to track volcanic clouds worldwide (which includes the much-maligned one at the Met Office), there might well have been an in-flight disaster by now.

The impact of volcanic eruption

As well as ash and pumice, 17 million tons of sulphur dioxide gas disgorged into the stratosphere. This formed minute particles of sulphuric acid that spread around the globe. These had astonishing effects – they promoted the chemical reactions that enable CFCs to destroy ozone, while cutting the amount of sunlight reaching the Earth’s surface. For atmospheric scientists, the eruption represented ‘a once in a lifetime opportunity’.

Although there had been earlier sulphur-rich eruptions, this was the first to be accurately measured by sophisticated satellite sensors. Huge amounts of data were collected on the generation and spread of Pinatubo’s dust veil, and on the evolving state of the atmosphere and climate. Because of its small size, the sulphurous dust only fell slowly out of the atmosphere.

The effects lasted for several years, lowering global average temperatures at the Earth’s surface by around half a degree in 1992 and 1993. 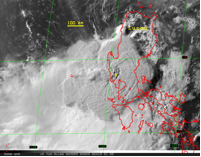 These figures hide much stronger regional effects that included summer cooling of a few degrees in North America and parts of Eurasia. Importantly, thanks to the measurements of the Pinatubo cloud and its impacts, climate scientists have been able to test their models for simulating the consequences of global warming. When the Pinatubo parameters are fed into the models, they do a good job of representing the observed patterns of climate change giving confidence in their performance for other tasks.

Thanks, too, to our understanding of the links between volcanoes and climate, we now know why there were poor harvests across Europe and New England in 1816 following an even larger sulphur release from the eruption of Tambora volcano in Indonesia. In Europe, where the Napoleonic Wars had only just ended, the resulting hikes in grain prices combined with widespread vagrancy and poverty fuelled lethal outbreaks of typhus. In Bavaria, the social disturbances took a more sinister turn when anti-Semitic riots broke out.

These early signs of the rise of fascism in Europe quickly spread, reaching as far as Copenhagen, Amsterdam and Kraków.
One of the proposals to limit future global warming is known as stratospheric geoengineering. The idea would be to pump sulphur into the atmosphere continuously, to generate the dust that reduces penetration of sunlight to the Earth’s surface. In other words, a perpetual volcanic eruption equivalent to a Pinatubo going off every four years! In thinking about whether or not this is a good idea, the Pinatubo case is instructive yet again.

Certainly, the artificial approach would lead to reductions in averaged global temperatures at the Earth’s surface. It is also one of the cheapest of the schemes that have been dreamt up to combat global warming if cuts in global carbon emission cannot be negotiated – it would merely need a fleet of jet aircraft flying in the stratosphere to burn sulphur released from tanks.

But a closer look at Pinatubo’s climate impacts suggests there would be some very undesirable side-effects. These include depletion of the ozone layer, reductions in solar power generation, an end to blue skies, and reduced rainfall in Africa in Asia that could threaten food security for hundreds of millions of people.

A final lesson from Pinatubo is that although scientists didn’t see the eruption coming, an old folk tale did.

There used to be around 10,000 indigenous Ayta people living on the volcano. One of their stories, collected in 1915, tells of the ‘king of the spirit hunters’, Aglao, and ‘the terrible spirit’ Bacobaco, who ‘threw fire from his mouth’. Bacobaco had angered the spirit hunters by poaching deer from their forests. Led by Aglao, the spirit hunters attacked Bacobaco.

Fleeing to Pinatubo, he dug into the mountain, hurling out rock, mud and dust, while shaking the Earth and repelling the spirit hunters with fire. The narrator finished by saying that ‘many believe that the terrible monster is already dead, but I think that he is just resting after his exertions, and that someday he will surely come out of his hiding place again’.

There are eruptions recorded in ancient pumice layers, in ice cores and in oral traditions that were tens and hundreds of times bigger than Pinatubo’s in 1991. When and where will the next truly great volcanic eruption take place?

Learning from the past will help us anticipate it and prepare.

About the Author: Clive Oppenheimer

Clive Oppenheimer is author of Eruptions that Shook the World (2011). He is a Reader in Volcanology and Remote Sensing at the University of Cambridge and a Research Associate...