The Presence of Nietzsche in André Malraux

R. E. Batchelor takes a close look at the links between Nietzsche's ideology and the work of André Malraux in the first of a two-part series.

It is probably true to say that Friedrich Nietzsche has exercised a more lasting and formative influence on modern French thinkers than any other single philosopher outside France. Gide, Sartre, Céline, Camus and Malraux, to quote only five authors, have on numerous occasions commented upon their real and profound indebtedness to the German philosopher (1844: Rökken-1900) whose virile, frenzied notions of creative activity, physical energy, heroic endeavour, and the cultivation of the elitist mentality are all central to the Existentialist ethic, as well as to other subjective creeds of the present age. Gide’s concept of “disponibilité=availability” corresponds very closely to Nietzsche’s advocacy of permanently open attitudes in an unrestricted system of thought. In his 1910 Diary, Gide states unequivocally: “It is precisely because it is very difficult (if not impossible) to reduce Nietzscheism to a system that one can never disregard it”. Again, Sartre’s view of the human condition as a constant “projet=thrusting forward”, or perpetual recreation of the self in action as exemplified by Orestes (The Flies) may be traced back to the Nietzschean ideology of the Übermensch (Overman/Superman), inspired by the phoenix-like desire for eternal rejuvenation. Yet again, Céline’s novels evoke the crazed revenge of a feverish, Nietzschean imagination on a self-destructive “real” world. Needless to say, this unrestrained attachment to Nietzschean ideology swept across the whole of Europe in the early twentieth century, witness as further examples, the Fascist glorification of the heroic with Italy’s D’Annunzio, the supersubjectivism of Spain’s Unamuno and Pío Baroja, the egotism of Ibsen, D.H./T.E. Lawrence…

All to do with an upward drive towards paroxysm, and here we come to André Malraux whose vigorous ideas on cosmic revolt and the dynamic artistic instinct are strikingly linked to Nietzsche’s ideology according to which the “individual himself is the most recent creation” (Thus Spake Zarathustra). Of course, it is well attested that Nietzsche stated nothing fresh or revolutionary in his The Birth of Tragedy, Thus Spake Zarathustra, and The Will to Power, the works that  quickened Malraux’s imagination most of all, and that he is by no means the father of Existentialism, but he did at least serve as a catalyst for the transference of Hegelian idealism and Schopenhauer’s concept of the world as will into a revolutionary twentieth-century Europe, a fact that Malraux recognizes as a radical contribution to contemporary thought. It may be legitimately contended that Malraux did not obtain his theories on the individual, art and novelistic practice directly from Nietzschesince they form the warp and woof of the twentieth century’s philosophical texture, but what is certain is that Malraux saw in Nietzsche a kinsman whose romantic idealism he makes his own. 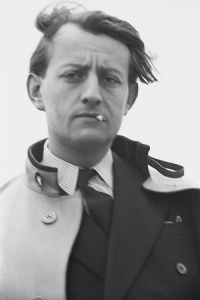 It comes as no surprise, therefore, that Malraux  expresses a deeper attachment to Nietzsche than to any other European thinker, unless it be Dostoevskii who constituted a “crushing presence” in Malraux, according to the critic G. Picon (subject of a future article). Imbued with a grandiose sense of history, Malraux stresses an unreserved, Promethean admiration for the German philosopher’s cultural and historical ideology, an admiration afforded an increased impetus by the chronological proximity of the two writers. Malraux was born a year after the death of Nietzsche (1900) whose writings were rapidly gaining universal diffusion and acclaim, largely due to the editorial devotion of Dr Oscar Levy. Malraux became so immersed in this Nietzschean tide that a case may be argued for his position as the principal French exponent of the German’s artistic and cultural creed.

There exist several clearly defined indications demonstrating beyond all doubt that not only did Nietzsche affect Malraux’s novels and characters, style, sense of structure and imagery, in short his creative urge, but also that, even before the age of twenty-one, the German had come to represent for him the true, undisputed apex of  aesthetic and philosophical authority. Clara Malraux, the novelist’s first wife, recalls that, well before she knew him, he was “obsessed with Nietzsche”. She also informs us that they discussed together, in passionate terms, the creative riches of Hölderlin, Novalis, Nietzsche, Dostoevskii and Tolstoii. Clara also discloses to us that Malraux never developed an interest in a strict social hierarchy, for all his early revolutionary ardour, but in a system constructed on values which were “essentially Nietzschean”. In other words, Malraux’s elitist mentality originates to a very great extent in the exclusive behaviour and obsessive convictions of the Nietzschean conqueror, the Siegfried ideal, both physically and morally. Finally, since Clara Malraux’s biographical writings contain numerous other revealing details regarding her husband’s affinity with Nietzsche, it may be unequivocally asserted that he felt a kind of inebriation with the exalted qualities and aspirations we have come to associate with the Übermensch, all centred on the will to power. Nietzschean inspiration led him on a heroic path which saw a convergence of intellectual lucidity and physical prowess. Clara Malraux quotes again: “I have never known my companion abandon a project because it ended in failure”. Difficult it would be to come across a more faithful, real-life reflection of the cult of the will to power than in Malraux whose stubborn search for Khmer statues along the Cambodian Royal Way (1923) serves to combine the highest intellectual pursuits in terms of archaeology and history, and sheer physical endurance. Claude, adventurer cum archaeologist in Malraux’s second partially autobiographical novel, The Royal Way, is the result.

Malraux’s own comments also point to the fundamental link with Nietzsche. It is true that, generally speaking, these comments are less direct and pungent than Clara Malraux’s, partly because they appear as oblique statements made by his characters, and partly because it is often difficult to discern, as with T. E. Lawrence whom me eulogized, where fact ends and myth begins in Malraux’s life and writings. Nevertheless, certain characters do express the novelist’s personal views. A convincing case in point is Vincent Berger, the narrator’s father, in The Walnut Trees of Altenburg. Thus we read of Vincent Berger: “My father loved Nietzsche more than any other writer. Not so much for his evangelizing as for the incomparable generosity of intelligence he found in him”. Since Vincent Berger is the idealization of Malraux’s own father, and given the novelist’s close identification with his father through the persistence of an unbreakable family bond, it remains quite evident that Vincent Berger is echoing Malraux’s own sentiments in respect of Nietzsche. The expression of this passion for the German’s Weltanschauung recurs repeatedly in Malraux’s Antimémoires where we read words identical to those quoted immediately above.

This passion is born of the sense of the tragic, of the bleakest privation which is transformed into a triumphant response to the afflictions and damaging vicissitudes of life. Nietzsche and Malraux praised Greek art for this very reason. The fact is that they both saw the Greeks as the first human group to convey in a permanent form a tender and profound suffering. The Greeks are perceived as the first organized community to question the meaning of the universe, and to grant man his only meaning through the mutinous gesture. Malraux writes: “…the decisive discovery of the Greeks was to call into question the purpose of the universe, and to offer mankind the right to oppose the arbitrary authority of their Olympian gods”. All higher forms of art are destined to express this Promethean sense of revolt, and to promote the creative urge that Malraux felt in his novelistic practice. All his fictional characters are the embodiment of this sense of rebellion against the blind force of the universe.

Next Friday’s post will explore how these Nietzschean-driven characters rebel in words and deeds against all universal forms of unjust authority.

About the Author: Ronald Batchelor

Dr Ronald Batchelor is the author of A Reference Grammar of French (2011). He taught French and Spanish for forty years in the Department of Modern Languages at the University of Nottingham. He has published many books on French and Spanish language, often with sec...

In the Footsteps of Thoreau