In Law and Identity in Colonial South Asia, Mitra Sharafi argues that rather than trying to maintain collective autonomy and integrity by avoiding interaction with the state, the Parsis sank deep into the colonial legal system itself. One way their unique identity was evident was in the cemeteries they dedicated for their dead.

I didn’t expect to spend time in cemeteries when I began work on Law and Identity in Colonial South Asia: Parsi Legal Culture, 1772-1947. Quickly, though, cemetery trips became a personal tradition. At first, they did not seem to be an essential part of my research. They started as a way to while away my Sunday afternoons during solo research trips abroad, when my archives were closed. Soon, I was hooked. Cemetery visits across Eurasia added color and context to my historical subjects’ lawsuits and legal careers. From London to Rangoon, I came to see graveyards as a special kind of archive.

My book is about the Parsis, South Asian followers of the ancient Persian religion of Zoroastrianism. The community’s death rites are famous. Bodies are consigned to cylindrical stone structures known as Towers of Silence (in Gujarati, dakhma), where vultures consume the corpses. Picked clean, the bones are deposited in the hollow center of a tower, mixing with other Parsis’ now powdered bones. Religious sensitivities and Zoroastrian purity laws prevent anyone but hereditary corpse bearers (Guj. nasasalar) from getting too close. I am neither Parsi nor Zoroastrian, and kept a respectful distance from Mumbai’s Towers, which sit in the middle of a lush, tropical garden in the old colonial neighborhood of Malabar Hill.

In places where the Parsi population was too small to sustain towers, Parsis were buried in cemeteries instead of being exposed to vultures. Parsi cemeteries were (and are) varied and beautiful. One morning, I was jogging in the woods of Matheran, a favorite Parsi hill station outside of Mumbai. I followed a pack of friendly stray dogs to a tiny Parsi cemetery, tucked away on a shaded side-path. It contained small, tilted headstones from the nineteenth and early twentieth centuries, including some from the Lord family, the Parsi family that owned my colonial-era hotel.  By contrast, the Zoroastrian section of Brookwood Cemetery outside of London houses the grand white stone mausoleums of the Tata and Wadia families, reflecting the dazzling wealth and global mobility of colonial Bombay’s “merchant princes.” The Tata family also occupies a corner of Paris’ stunning Père Lachaise cemetery. There lies Sooni Tata, a French woman (née Suzanne Brière) whose marriage into the Tata family triggered a famous lawsuit in Bombay over the admission of ethnic outsiders (Guj. juddin) into the Parsi Zoroastrian fold. Had Petit v. Jijibhai (1906-9) been decided differently, Mrs. Tata’s bones would now rest in the towers of Malabar Hill.

From London to Rangoon, I came to see graveyards as a special kind of archive.

There was also the Parsi cemetery—or remnants of it—that I visited outside of Rangoon (now Yangon) in Burma in 2006. My guide was a young man claiming to be the last Parsi in Burma. He was also a descendant of litigants in another major conversion case in my book, the Privy Council case of Saklat v. Bella (1914-25). This man and his father had rescued Parsi tombstones when Myanmar’s military regime confiscated the community’s cemetery in 1995. Relocated to a new plot of land assigned to the Parsis by the government, this collection of headstones now sat in bits and pieces, piled in a storage shed. The barely legible English and Gujarati text reconstructed fragments of the history of the Parsis of Burma, a diaspora of a diaspora. Traveling later in Texas to speak to a Parsi organization, I showed my local hosts an image of the Rangoon tombstone of a long-lost member of their family, a young woman who had moved from India to Burma in the early twentieth century. Nobody had known what had become of her.

I also visited non-Parsi cemeteries. In London, I made one trip to Paddington Old Cemetery looking for F. C. O. Beaman, a blind British judge whose 1928 obituary identified this graveyard as final resting place. The tombstone had been removed, but I located a great-grandson through an address on file with local authorities. This descendant told me of the judge’s part-Jewish ancestry, a fascinating fact given Beaman’s comments from the Bombay High Court bench likening Parsis to Jews. In Mumbai, another Sunday trip took me to Sewree Christian Cemetery in search of the grave of J. D. Inverarity, colonial Bombay’s most celebrated European barrister. This grave too was now unmarked, but the cemetery attendant produced a huge, crumbling register, efficiently locating the grave site and providing me with details on the famous Scottish lawyer. Like Parsis consigned to the towers, these Europeans left no lasting, personal space marking their individual deaths.

Together, these trips revivified for me the story-telling element of the historian’s craft. They brought to life—through death—the stories I wanted to tell. 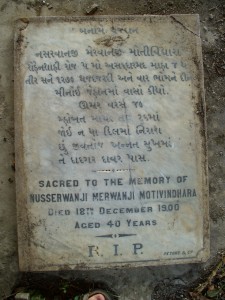 About the Author: Mitra Sharafi

Mitra Sharafi is the author of Law and Identity in Colonial South Asia. She is a legal historian at the University of Wisconsin Law School with History affiliation. ...