Into the Intro: Shakespeare as Literary Dramatist

William Shakespeare turns 450 this April! To celebrate four and a half centuries of his works and legacy, we will be sharing exclusive Cambridge Shakespeare content throughout the entire month. We kick off the celebration with an excerpt from the updated 2nd edition of Shakespeare as Literary Dramatist, the landmark work of Shakespearean scholarship from leading international expert Lukas Erne.

In a letter appended to his Apology for Actors (1612), Thomas Heywood allows us a rare glimpse of Shakespeare’s inner life. In the third edition of a miscellany called The Passionate Pilgrim, which had been published earlier the same year, the printer William Jaggard had added certain pieces from Heywood’s Troia Britannica (1608) to the poems present in the ﬁrst two editions. Yet, far from acknowledging Heywood’s authorship, the title page describes the collection as “newly corrected and augmented. By W. Shakespeare.” Shakespeare does not seem to have been amused. He was, Heywood tells us, “much offended with M. Iaggard (that altogether vnknowne to him) presumed to make so bold with his name.” Shakespeare may well have taken the matter further. Of the two extant copies of the 1612 Passionate Pilgrim, only one bears Shakespeare’s name on the title page, while the other copy omits it. Shakespeare’s displeasure seems to have been such that he requested a new title page for the unsold copies, from which Jaggard removed his name. 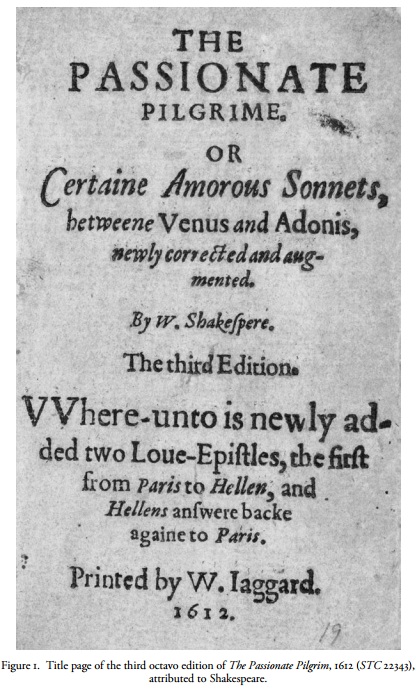 This incident presents us with a picture of an unfamiliar Shakespeare: keenly aware of what is and what is not his literary property, concerned about his reputation, proud of his name and unwilling to have it associated with lines that did not ﬂow from his pen. The Shakespeare we are familiar with is in many ways a different ﬁgure. Building upon his article for the Dictionary of National Biography, Sidney Lee, in his inﬂuential biography, was instrumental in promoting the image of a Shakespeare unconscious of the quality of his work and largely uninterested in it beyond its“serving the prosaic end of providing permanently for himself and his daughters.” Many biographies have followed since, and few have entirely endorsed Lee’s portrait of Shakespeare as a money grabber. Yet what has remained largely unchanged in our view of Shakespeare is that he allegedly had little interest in his writings as personal property and even less interest in posterity.

How inconsistent is the picture of the“much offended” Shakespeare we glimpsed above with what we gather about Shakespeare at other moments of his artistic career? Robert Greene’s attack on Shakespeare in Greene’s Groatsworth of Wit is well known: having given some advice to three of his fellow playwrights (probably Christopher Marlowe, Thomas Nashe, and George Peele), he goes on to warn them against an

“upstart Crow, beautiﬁed with our feathers, that with his Tygers hart wrapt in a Players hyde, supposes he is as well able to bombast out a blanke verse as the best of you: and beeing an absolute Johannes fac totum, is in his owne conceit the onely Shake-scene in a countrey.” 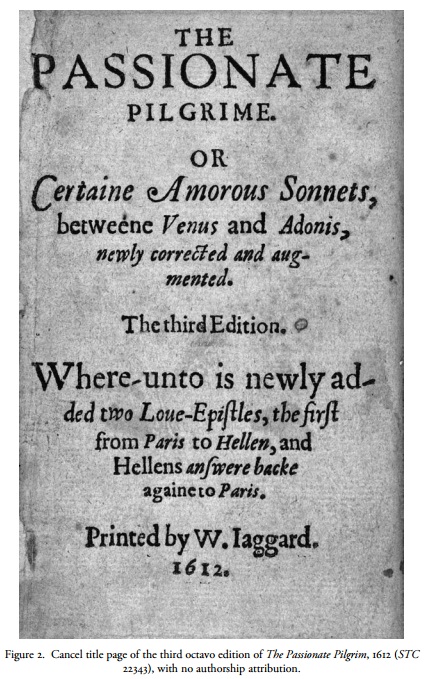 It is possible, of course, to dismiss Greene’s attack as symptomatic of his jealousy and therefore hopelessly biased. It would admittedly be foolish to argue that Greene is an altogether fair and disinterested commentator. Nevertheless, the passage may be of greater interest for what it tells us about the object of the attack than about the attacker. As early as 1592, Shakespeare had done enough to awaken a rival playwright’s jealousy. He was well advanced in the ﬁrst tetralogy, the most ambitious project the professional stage had yet seen, which was to ﬁnd its completion soon after with Richard III. Signiﬁcantly, attributing to Shakespeare a “Tygers hart wrapt in a Players hyde,” Greene not only accuses Shakespeare of duplicity but simultaneously alludes to a line in Henry VI, probably the most recent product of Shakespeare’s ambitious project.  Marlowe had written a two part play and so, it seems, had Thomas Kyd. A mere player (as opposed to Greene and other university-trained gentlemen), not yet thirty years of age and still relatively new among London’s playwrights, Shakespeare was not content to follow their precedent but seems to have been eager to outdo them. Shakespeare, Greene has it, “is in his owne conceit the onely Shakescene in a countrey.” There is no way of knowing how justified Greene’s  punning allusion to Shakespeare’s alleged conceitedness was, but what we know about Shakespeare’s dramatic writings at the time does suggest a fair amount of artistic ambition and self-consciousness.

Some time between Greene’s attack in 1592 and Heywood’s letter in 1612, Shakespeare must have written his sonnets. No reader can ignore how prominently the theme of poetry as immortalization figures in them. In fact, no fewer than twenty-eight sonnets deal with this topic. Sonnet 74 will serve as an example:

But be contented when that fell arrest
Without all bail shall carry me away.
My life hath in this line some interest,
Which for memorial still with thee shall stay.
When thou reviewest this, thou dost review
The very part was consecrate to thee.
The earth can have but earth, which is his due;
My spirit is thine, the better part of me.
So then thou hast but lost the dregs of life,
The prey of worms, my body being dead,
The coward conquest of a wretch’s knife,
Too base of thee to be rememberèd.
The worth of that is that which it contains,
And that is this, and this with thee remains.