Optimistic Republicanism, and Lessons for Today

Donald Critchlow, author of When Hollywood Was Right, reflects on Shirley Temple Black’s legacy as an actress and political activist, and what conservatives can learn from her remarkable career.

The death of Shirley Temple Black on February 11, 2014 marks the passing of a generation of old Hollywood Republicans. Like many actors who became active in Republican politics in the late 20th century, Black’s involvement came after her movie career was in decline. One thinks of other members of the Hollywood Right, as discussed in my book When Hollywood Was Right, who became involved in Republican politics, most notably Ronald Reagan, George Murphy, and Robert Montgomery, who moved into politics following successful acting careers. Of course, some activists such as John Wayne and Gary Cooper continued to enjoy successful acting careers while remaining active Republicans. 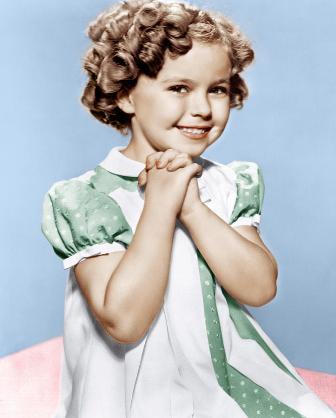 Black brought a natural optimism from the screen to her career into politics and into public service career. As one of the most popular actresses in the 1930s, Shirley Temple portrayed the happy, little girl who conveyed a brightness about her future no matter how dire her circumstances, whether she portrayed it be an orphan or a poor girl seeking to save her family. She delighted audiences with her singing and dancing. She was “Bright Eyes” in her films. This is what audiences wanted to see in the midst of one of the worse economic depressions in American history. Perhaps Republicans today can learn from Shirley Temple, child actress and public servant.

Shirley Temple began acting at the age of 3 and by the time she was 10 she had become America’s darling. Her films outdrew popular adult stars such as Clark Gable, Bing Crosby, and Tracy Spencer—by the way, all Republicans. The sparkling, upbeat characters she played, along with her obvious talent, drew audiences to her movies. Behind the cameras, Shirley Temple was a consummate professional. Never big-headed, always keeping her celebrity in perspective—largely due to her mother’s influence—she memorized her lines, practiced her dance routines, learned from her fellow actors, and was pleasant in the studio and behind camera. Compare this attitude with many of today’s actors who appear more childish in public than Shirley Tempe was at the age of 10.

Following her success in films such as Curley Top and Heidi in the mid and late 1930s, her popularity waned. She appeared in films in her late teens, but these pictures failed to draw audiences who wanted to see the young, smiling child star of yesteryear. She retired from movies in 1950 at the age of 22. Meanwhile, her personal life in these years was not good.  In 1943, Temple, age 15 met John Agar whom she married two years later when she was 17 year old. The couple made two films together, Fort Apache (1948) and Adventure in Baltimore (1949). Agar developed a drinking problem and the marriage fell apart. In December 1949, she filed divorce. She received custody of their daughter. Shortly after the divorce, she met Charles Alden Black, a United States Navy intelligence officer. He was wealthy and conservative. The couple relocated to Washington, D.C. when he was recalled to the Navy at the outbreak of the Korean War. While in Washington, Shirley Temple Black became interested in politics and government. They returned to California after the war and eventually settled in the upscale community of Atherton, California. The couple remained married for the next 54 years.

She conveyed grace, projected optimism, held firm on principle, and understood that the world could not be made perfect but could be bettered.

In 1967, she threw her hat into the political arena when she ran in a special election in California 11th congressional district to fill the seat left vacant by the death of eight-term Republican J. Arthur Younger. She ran as an avowed conservative, a supporter of the war in Vietnam. Her social conservatism was evident in her opposition to pornography. Her opponent, Pete McCloskey, set a sharp contrast as a staunch opponent of the Vietnam War. In her campaign she tried to tap into her public image as Hollywood star, an optimist, and a conservative. At her campaign stops, “The Good Ship Lollipop” was played.  Her problem was that people still saw her as a child star and their image of her did not jell with her hawkish views that called for a an increase of troop levels in Vietnam. Her campaign manager told the press that “Everybody knows who she is. The problem is to make them realize that she has grown up.”  The Associated Press ridiculed her for “petulant pursed lips” on the campaign trail and her child star image was satirized in an Off-Broadway play and on television. She was not prepared for the rough and tumble of this kind of campaign in an upper-middle class suburban district. She lost the primary decisively to McCloskey, who later supported John Kerry and Barrack Obama in their presidential races.

Black remained in California politics as an active member of the California Republican Assembly, a state organization that had swung to the right in 1964 during the Goldwater campaign. Her public career was just getting started. Richard Nixon appointed her to serve as the U.S. representative to the United Nations General Assembly. Gerald Ford appointed her as U.S. ambassador to the Republic of Ghana. She learned the native language and became well-versed on the history and politics of the country. In 1989, Black accepted an appointment as U.S. ambassador to Czechoslovakia and witnessed the country’s “Velvet Revolution” from communism to a democratic government. In witnessing the fall of communism in Eastern Europe and the Soviet Union, Shirley Temple and the old Hollywood Right enjoyed their greatest victory, perhaps getting the last laugh on their opponents who denounced them as reactionaries who threatened world peace.

She conveyed grace, projected optimism, held firm on principle, and understood that the world could not be made perfect but could be bettered. This is a lesson we all can learn from this child-star idol and public servant.