Snowed In, Playing with Pieces of an Ancient Puzzle

The Past in Our Present

Douglas Boin, the author of Ostia in Late Antiquity, tells a tale that spans centuries, cultures, and the Atlantic. As you prepare to attend the Archaeological Institute of America's meeting in Chicago this January, take a moment to appreciate the Windy City's fascinating connection to the Roman Empire.

Winter is almost here, like the ones I remember in Chicago growing up. But I’m ready. There’s history here, and that’s the perfect time to light a fire and curl up with a good story.

I’m trained as an archaeologist and a historian. Whenever I have a free moment, my mind naturally runs to the neighborhood taverns of Rome or to its grand imperial halls. I know that settling in during a grey and dreary afternoon, with stuffy stories from the attic of history, isn’t everyone’s idea of fun. But winter reminds me of the twilight of an empire—and of my own tangible connection to it, in Chicago. 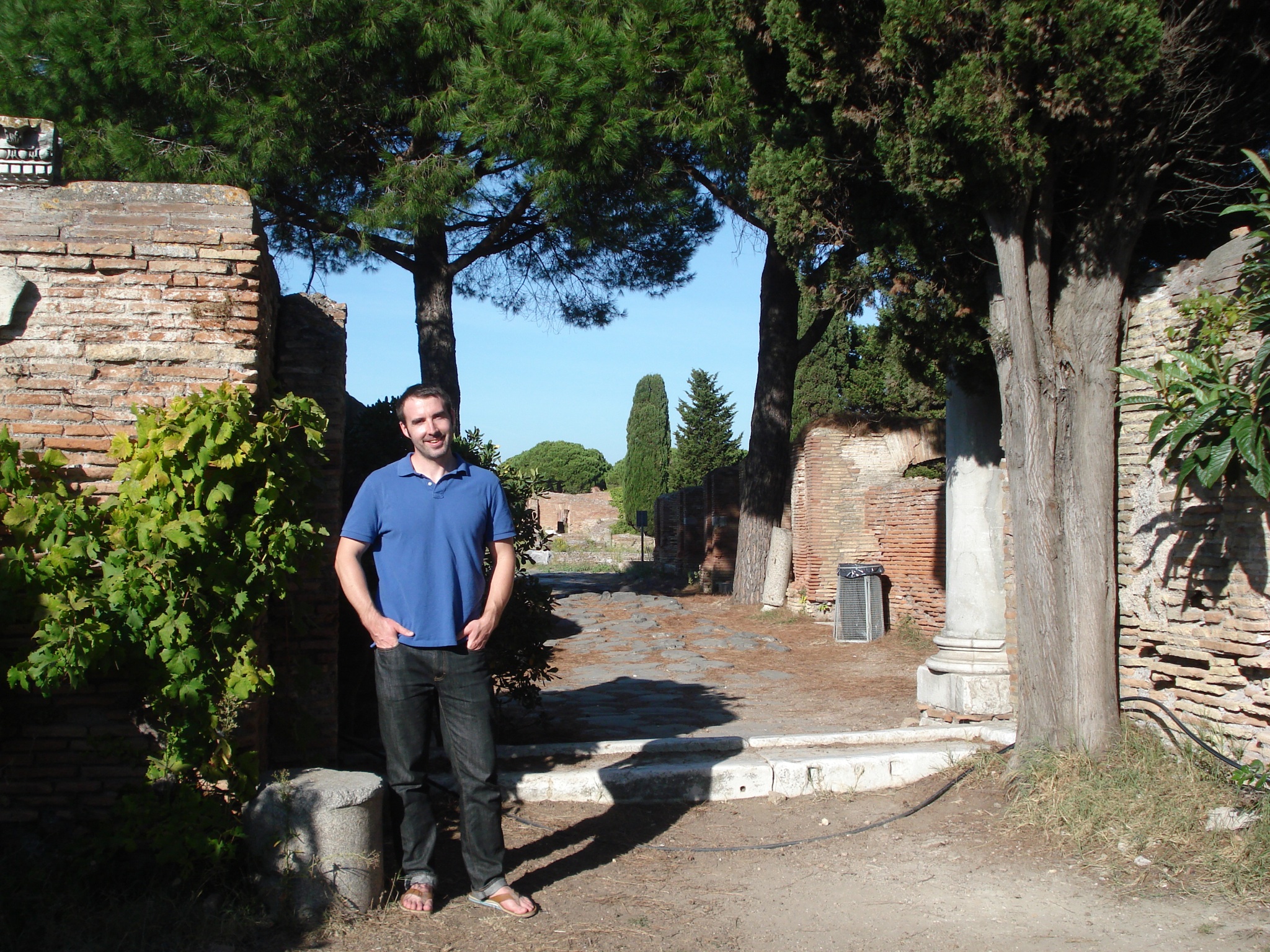 Summer in Ostia: the author standing where the column once stood in the days of ancient Rome

The past is everywhere you look in my old home town. Its more recent ghosts haunt the streets of the Loop, which was wiped out by a raging fire in 1871. People bold enough to explore the uses of steel, like Louis Sullivan and Daniel Burnham (the latter of The Devil and the White City fame), stepped in to rebuild. Many of their experiments still stand, like the Carson Pirie Scott building on State Street. Today, it’s a Target.

All of them are a sure sign that the past hasn’t quite faded away. It’s been transformed. Even the Fire are still all the rage (on the soccer pitch).

That resilience—a sense of wanting to take something from long ago and make it useful again—all of it reminds me of another place I’m proud to call home: Ostia, the old harbor town of ancient Rome.

Did someone raised on the shores of Lake Michigan ever dream of working on the Mediterranean Sea? Nope.

Founded at the dawn of the third century B.C., Ostia’s streets and shops, houses and apartments pulsed with life, in some form or another, until the eighth or ninth century A.D. For centuries, importers, traders, tug-boat operators, wealthy middlemen, and a wealthier elite for nearly a thousand years made Ostia the workhorse of the capital, a kind of “second city” that helps us illuminate life Rome. (I tell the story of its later history in my book, Ostia in Late Antiquity.)

What’s most surprising to me after working there all these years, however, was coming home and finding a piece of Ostia in my front yard.

The connection between Chicago, Rome, and Ostia dates back to before the Second World War. In 1933, the Italian pilot, Italo Balbo, undertook the air force’s first transatlantic flight. He touched down in Chicago. (You can read more about Balbo’s flight here.) To commemorate the trip, Benito Mussolini gifted the people of the Midwest a piece of the Roman past: a column from Ostia.

Today, there are touchdowns of a different sort where that column now stands. 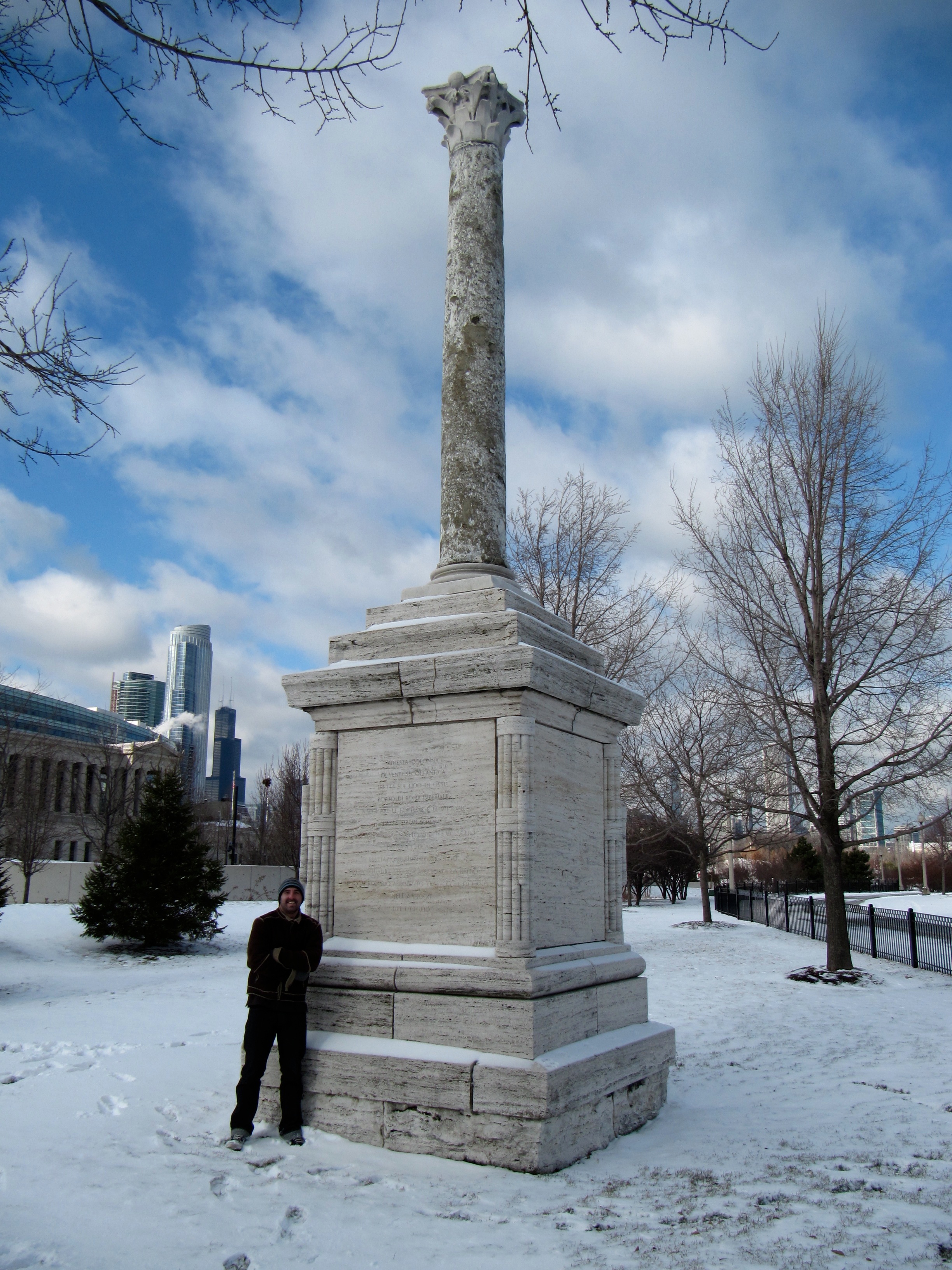 The column in its new location in Chicago

It’s been propped up a pedestal outside Soldier Field, where every winter the Bears and their ardent fans brave the winds off Lake Michigan, even the snow, to watch football.

How many times growing up did I walk by that stadium while my future friend stood stone-cold on a pedestal nearby? I can’t really say. Now that I’ve had a chance to see where he came from, to stand where he once did, I feel like a lost piece of my own story is finally in place.

That’s the way history works. Whether in Chicago or Rome—after a decimating fire or during the “fall” of an empire—the past is always a part of the puzzle of who we are. It’s not so easily tossed aside. Sometimes, people struggle mightily just to figure out where it goes.

I know because the people of Ostia still have quite a few stories to tell us about life at the “end” of Rome’s empire. Today, we often think they lived through a period of “Christian triumph,” in which their own “inferior” religious traditions failed. But their curious story is a tale to settle in with, on a cold winter’s night.

About the Author: Douglas Boin

Douglas Boin is the author of Ostia in Late Antiquity, published this year from Cambridge University Press. From 2010-2013 he taught in the classics department at Georgetown University. He is currently a professor of history at Saint Louis University....