The Procession of the Trojan Horse in Troy (1773). Public Domain.

Robin Hesketh, author of Introduction to Cancer Biology, turns to Shakespeare and Trojan Horses of Troy, to talk about advances in leukaemia research.

One of the pitfalls of writing is repetition. Be it book, blog or broadsheet, most authors must dread someone gleefully chirruping ‘You used that exact phrase in 1999.’

I wonder if The Immortal Bard suffered likewise – having to resort to ferreting through piles of dusty manuscripts, finally in desperation shouting ‘Anne, Anne – got this great new line – If you prick us do we not bleed? – Heard it before?’

..most authors must dread someone gleefully chirruping ‘You used that exact phrase in 1999.’

‘Yes, of course dear. You used it in that thing about the Italian moneylender.’
‘Damn. Thought it sounded familiar. Where would I be without your memory – make me immortal with a kiss.’
‘Give over you daft beggar – even you know that’s one of that Marlowe bloke’s lines!’
‘Doh!’

I’m something of a sitting duck here, partly through not being Shakespeare but also because of the habit of often talking about biology. Take one simple example, Will’s tiny pinprick of blood – in which there will be about fifty million cells. That’s fifty million separate little sacs swirling around in a bead you wouldn’t notice if it wasn’t bright red. Isn’t that stunning for starters?

Indeed, but it’s when we turn to molecular cancer that nature’s capacity to amaze is unfettered, the remarkable becomes the norm and even the English language can seem inadequate. 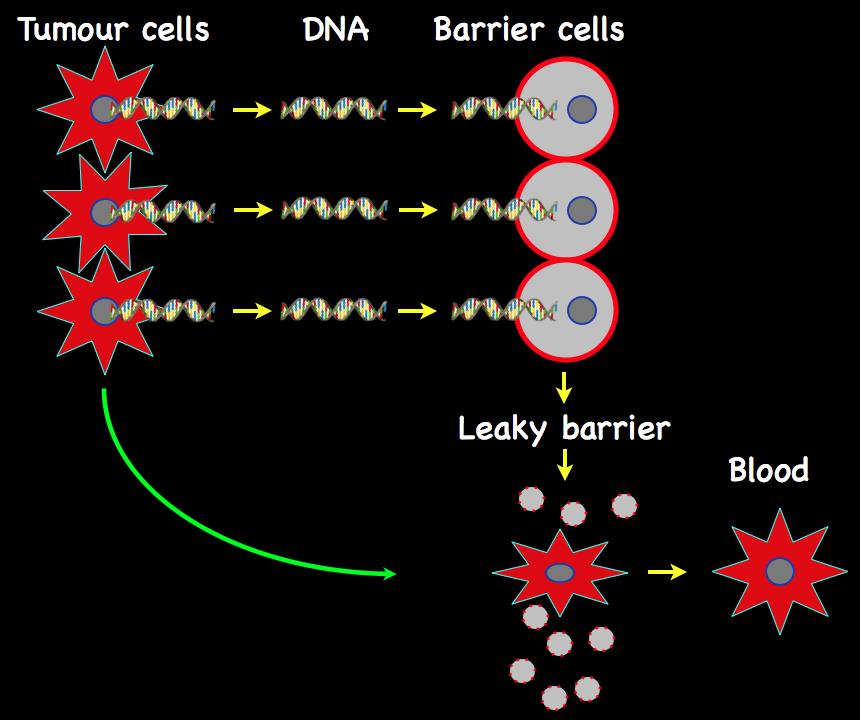 A study of a mouse model of one form of leukaemia is the most recent contribution to have us sifting Shakespeare’s superlatives to do justice to the discovery.

Blood cells start life within the bone marrow but, until they’ve matured, they’re corralled by a marrow–circulation barrier, also made of cells. Adult cells normally make proteins on their surface that attach to the barrier, and these help them to squeeze past into the freedom of the circulation.

In leukaemia abnormal levels of white blood cells are present in the circulation, which means that those cells have also found a way through the bone barrier.

A Prague group have shown that one type of leukaemic cell has come up with an astonishingly novel escape mechanism in which they release fragments of their own DNA. That’s pretty staggering because not only is DNA generally locked in the nucleus but it comes in large chunks called chromosomes.

So two very unusual things have happened to get to this stage: (1) some of DNA has been shattered and (2) these pieces have crossed not only the membrane that encloses the nucleus but also the outer boundary of the cell itself.

But then something even more extraordinary happens: having tunnelled their way out of the tumour cell, the escaped bits of DNA do a kind of reverse reprise by entering the cells that form the barrier between bone marrow and circulating blood. It’s as though the barrier cells see the passing packages of DNA as presents and gobble them up.

Alas! They should have read their Virgil – or at least Dryden’s summary of the tale of the wooden horse of Troy: ‘Trust not their presents, nor admit the horse’ – for the barrier cells pay the ultimate price for their gluttony. The DNA fragments are sensed as something abnormal – as indeed they are – and this provokes a stress response – and a pretty extreme one at that – because the cells are so overwhelmed by the influx that they commit suicide.

The capacity for individual cells to switch on a death program is an important part of life – it’s essential in normal development and it’s also the best cancer defence we have. In other words, if things get out of control, kill the cell – because that eliminates the danger and cells can be replaced. But here we have an almost stupefying paradox: in the tumour cells this defence is neutralized – but they’ve come up with a way of turning it on in the normal cells they have to get past in order to spread around the organism.
It’s another astounding example of the plasticity of our genetic material and the incredible adaptability of cancer cells. Even Mr. S. might feel adjectivally challenged!

About the Author: Robin Hesketh

Robin Hesketh is the author of Introduction to Cancer Biology (2012). He has been a member of the Biochemistry Department at the University of Cambridge for over twenty-five years. He...