We challenged our readers to imagine that they found Hemingway's missing suitcase and his long-lost short stories. What would be in it? What would the opening line say? We are excited to announce the winners here!

The “Lost Suitcase” incident is now legendary: In December 1922, hoping to surprise her husband Ernest Hemingway, Hadley brought all of his writings-in progress so that he could work on them during their holiday in Switzerland. Instead, the suitcase containing the manuscripts—carbon copies included—was stolen from her at the Gare de Lyon in Paris. Years of Hemingway’s hard work vanished into thin air.

“I suppose you heard about the loss of my Juvenilia? […] All that remains of my complete works are three pencil drafts of a bum poem which was later scrapped, some correspondence between John McClure and me, and some journalistic carbons,” Hemingway wrote morosely to his mentor Ezra Pound on January 23, 1923. “You, naturally, would say, ‘Good’ etc. But don’t say it to me. I aint yet reached that mood. I worked 3 years on the damn stuff. Some like that Paris 1922 I fancied.”

We challenged our readers to imagine that they found Hemingway’s suitcase and his long-lost short stories. What would be in it? What would the opening line say? What would the story be about? Where would it take place? Who are the characters? They had one sentence to set the scene.

Editor’s Note: We only asked for an additional description after we picked our grand prize and first place winners. We didn’t consider additional content during judging itself. 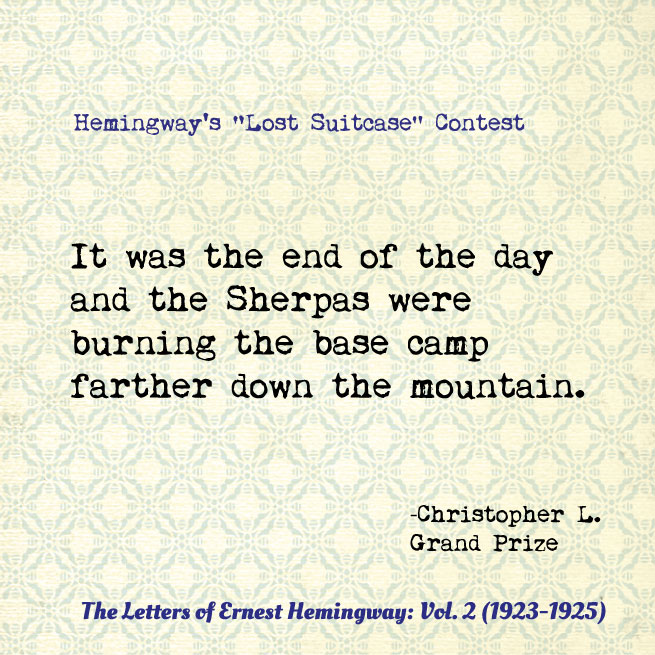 “I had a rough sketch in my mind of the 1930s, and two men—friends, ex-soldiers—are coming down one of the mountains in the Himalayas. The Sherpas have burned the base camp and the supplies for reasons unknown. On the men’s long trek back to ‘civilization,’ their friendship starts to unravel and so dooms their survival,” says Christopher. 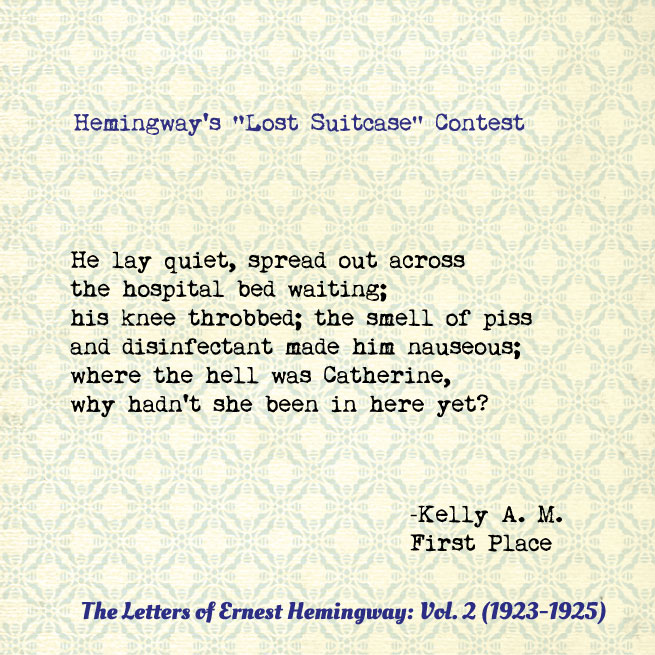 Kelly also sent us a longer snippet from the full short story:

He lay quiet, spread out across the hospital bed waiting; his knee throbbed; the smell of piss and disinfectant made him nauseous; where the hell was Catherine, why hadn’t she been in here yet? In the muted light that reflected from the small lamp on the table next to his cot, he thought he saw a figure moving closer. Was it her? Had she finally kept her promise? God dammit, he couldn’t admit to himself just how desperate he felt to see her. The throbbing was getting worse now, stretching out to the other leg. A relief to his thoughts. As he tried to move his leg upward, it didn’t last long. Her face was so clear, the pain from their last encounter played through his mind, like the mortar shell that blew up almost in front of him. He was tired; his eyes heavy from the morphine injection, he gave into the urge to shut them. The throbbing from his wounded legs momentarily muffled. His mind drifted. Past her, past his damaged legs and defeated heart. His body shuddered.

Editor’s Note: These submissions have not been edited; they are displayed as submitted.

1) I drank too much that winter in Toronto, which made it easier to bear the most damnable city on the planet and easier to hate my ex-wife Annabel, who left me for a newspaper man and took my Purple Heart with her. Rachel E.

2) On the snowy field Nick stared at death and death stared back. William H.

3) Nick fiddled with the engagement ring in his pocket that he was going to give to Marjorie. Stephanie A.

4) It had been another long Parisian night and he looked out at the dawning sky and the fading stars, fading just as his feelings for that beautiful woman had. Andrew T.

5) What started out as an uneventful, innocent-looking, Seney, Michigan fishing trip, turned into: the world’s best fishing story from a town that wasn’t there anymore,with the world’s best artificial lures that hadn’t been invented yet by Michigan’s most beautiful girl who was actually runaway Polish royalty with amnesia. David W.

6) “The fish are biting off the point, Marge; can you get away from work this Saturday so we can get some?” Peter H.

7) In the late summer of that year we lived in a loft in the Hell’s Kitchen that looked across the river and the George Washington Bridge to Bergen. John S.

8) He was an old hipster who coded alone in a loft above an aroma bar in the East Village and he had gone eighty-four days now without drinking a craft beer. John S.

9) It was mid-December by then and the fish were all gone and we walked away from the river without looking back, as if spring would never come again. Letisia C.

10) It was hard for him to place the ad–“For sale. Baby shoes. Never worn.”–but even harder when someone replied. Joseph F.

11) I woke up screaming, drenched in sweat, in between the real and the dream, foggy, thinking I was lying with men in a pool of their blood and the stench of death was inescapable; I could not crawl away, stuck in the muddy trench. Bill H.

12) I sat in the dugout kitchen in the late afternoon after the hunt and the snow began to fall against the darkening sky and thought how quiet the snow is falling at this time of near darkness. Robert T.

13) Nick tossed another log on the fire and walked to the edge of the bluff where he saw the early evening’s rainbow and its reflection in the lake create a halo around the quiet wake of Jenny’s canoe as she slipped away from her father’s cabin on the distant shore. Bill F.

15) The girl turned away from him; she knew how to lay her cards on the table and she also knew how to fold; this time, however, it was something different this time she was bluffing, she was playing the game better than him. Tristan M.

16) Alone on the street, just beyond where the rue Descartes turned left, Jake saw the glittering drunken group exit the cafe and heard the laughter and joking from another world, of lives still far beyond hearing the drums of wartime. Michael

17) Spring came to Paris late that year, in torrents, then the sun broke through and we all thought we were done with the long stretches of bad weather; just as quickly as we thought it, however, a gray air mass moved in off the Atlantic and locked in tight, dropping the temperature to a chill — Rene came down with a cold, and nursed it along with several brandies at the Cafe Saint Sulpice, Jeanne was struggling to keep the baby warm, and someone was burning hickory in a woodstove somewhere up in the Contrescarpe as I stopped by the Poste to see if my money had arrived from my publisher. Yago M.

18) The hunter caught the gleaming rill of blood again and tracked it through the bosk until he found the she-bear lain prone in the fork of a small oak as if resting. Nathan B.

19) He had the river to himself in the fall and its trout and his evening trips to the pub provided the best escape from the the scars of last year.  Mike S.

20) He remembered that Paris in the rain had a particular smell to it — the smell of moldering tradition, wet bread and youthful idealism, all mixed into one — but this wasn’t Paris and all he could smell were the fires. Jason B.

21) Benny Leiner was lean and greased, he rolled his shoulders and tapped his gloves as he fixed his gaze on Richie Mitchell; he waited patiently for that sharp bell. Anand M.

22) Nick waited at the dock for the Chicago steamer to arrive, but he didn’t want to take it. Robert B.

23) The worn brown-colored satchel didn’t belong on the cluttered auction table with all those items that screamed of wealth, and it seemed chillingly familiar, as if I myself had used it once. Nani

24) He had never truly made a choice as to what he liked better – the crisp, polite bite of a Toronto winter wind or that heavy, slightly fishy air that seemed exclusive to the south of France – but now, standing barefoot on the hot sand, he decided it was the latter. Lauren S.

25) Stepping back into the firs Nick watched the canoe go up the shore. Anton B.

26) Though the sun beat and the sweat ran down into his eyes, Nico did not blink; he had seen that this bull remembered him. Jessica A.

27) As the man watched her drink coffee beside the window while dull light filled the apartment above the rue du Carnidal-Lemoine below, he felt as if he no longer knew her. James S.

28) We had not yet begun to realize that winter was upon us. Mary H.

29) The worst thing of all was the dammed irony of the situation- almost three years had passed and the only thing he had left was one rambling essay about an old Adler trunk which had fallen across the river. Joseph E.

30) We abandoned the post at first light when we thought no one, not even one, was going to return. Anderson F.

31) The mortar shell had stolen his hearing two years ago, but every morning he heard the explosion anew. Meghan P.

32) The smell of burning oil changed to the taste of blood and feathers as the bird hit his face and the car left the road for a ditch ending his race. Jim D.

33) It was in Vienna, in the mailbox stickered “301”  in foyer of the building where I was staying that I first read of Sebastian’s death: it was ten a.m., July, and the sun seemed to be already at its highest point as it shone through the narrow pane of glass above the door frame. Michael S.

34) Her only response to single shot which rang from the kitchen of Les Deux Magots was a long slow drag on her beloved Gauloises. Scott M.

35) Big Pete set his bike down on the cote d’azur and slowly crossed the velodrome to where his coach was waiting. Benjamin R.

36) She hadn’t considered the outcome of writing the letter, let alone posting it years later to the address that was the site of her last happy moment. Joanne

37) The few old men and women still standing in the small village of Schio called him Padre Samuel although he was a doctor, left behind with a couple of chickens and a scrawny mule, too weak to reach the caverns in Mount Pasubio.  Bogdana R.

38) Then winter came and the icy boulevard to St. Michel. Erik B.

39) The snow settled on the graves of Cimetiere du Montparnasse and without her with me it would have been lonely. Paul W.

41) He sat in the morning by the icy river, watching the branches and trying to know that what he’d said in the cafe was right. C. Edgar P.

Thank you for making this a fun contest, and congratulations to the winners!