The Universe on a Laptop

It's now possible to delve deeper into the Universe than ever before. Brian Koberlein, author of Astrophysics Through Computation, walks you through the process.

With the rising power of personal computers, it is now possible to explore models in astrophysics computationally. Models that once were once analyzed purely by hand can be calculated with relative ease, and problems that were difficult to analyze can now be studied by undergraduate students.

As an example, consider what is perhaps the simplest model for a star, known as a polytrope. This model treats the star as a gas is in hydrostatic equilibrium, with pressure of the gas balancing the force of gravity. The pressure, temperature, and density of the star as a function of depth can be determined by solving a differential equation known as the Lane-Emden equation. The exact form of the equation depends on the equation of state for the gas, from which one can determine what is known as the polytropic index n.

While the Lane-Emden equation looks relatively simple, it only has an analytic solution for a few polytropic indices (n = 0,1,5) none of which are particularly useful for main sequence stars. Main sequence stars have a polytropic index of about 3, for which there is no analytic solution. Approximate solutions can be obtained by hand, but one can also obtain numerical solutions quite easily, such as the forms obtained in Mathematica as seen below. 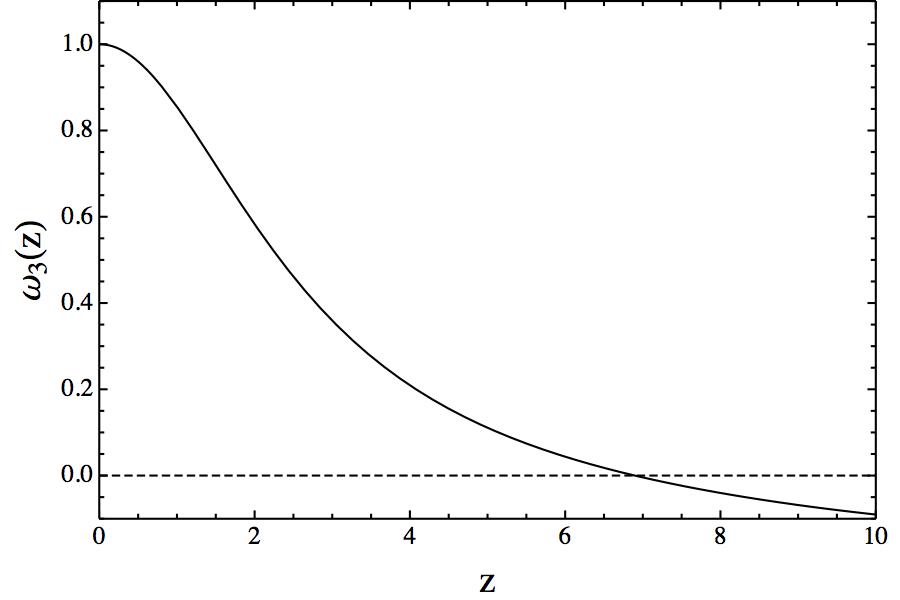 The polytrope model has historically been used not because it is a particularly accurate stellar model, but because it is somewhat tractable. While it provides a general description, doesn’t account for fusion in the core, convection, or radiative energy loss, which are crucial to our understanding of main sequence stars. There is however, a different type of star where the polytropic model is more accurate. These are degenerate stars, commonly known as white dwarfs.

A white dwarf forms when a star such as our sun has fused all the elements it can, and has therefore “run out of fuel”. Larger stars can explode into supernova, but stars like our sun simply swell into a red giant for a while, then gradually cool down. With no more fusion in its core, the old star is basically just a hydrostatic mass. The key difference is that the density is so high it is the electron pressure that keeps the star from gravitationally collapsing. All the free electrons act somewhat like a regular gas, but with one big exception: the electrons obey the Pauli exclusion principle.

In broad terms the Pauli exclusion principle means that the electrons can’t occupy the same state. It is kind of like musical chairs where everyone jostles each other to find a seat, and two people can’t share the same seat. As a result of the exclusion principle the electrons exert a degeneracy pressure to keep all the other electrons out of their chair. You can therefore treat the electrons as a simple gas with a pressure due to the exclusion principle. So to model a white dwarf, we just need gravity and the equation of state for our electron gas.
Since the equation of state for an electron gas is similar to an ideal gas, a white dwarf can be modelled as a polytrope. In the simple stellar model, the equation of state for the ideal gas meant the polytropic index was constant. But the polytropic index for an electron gas varies as it becomes more energetic, shifting from n = 3/2 in the non-relativistic case to n=3 in the relativistic limit. The polytropic model for a white dwarf therefore depends on the energy of the electron gas, which in turn depends on the mass of the white dwarf star.

This is where computational methods become useful, particularly in demonstrating the limit to white dwarf mass. The upper limit of a white dwarf’s mass, known as the Chandrasekhar limit, can be derived analytically using the relativistic electron gas. Using numerical methods and the polytropic model, how a white dwarf approaches this limit can also be demonstrated.

In the figure below, selected stellar masses are used to calculate first the energy of the electron gas, and then the radius of the (polytrope) white dwarf. These data points are then fit to a curve showing the variation of radius with mass. The result shows a collapse of the white dwarf at about 1.4 solar masses, which is the Chandrasekhar limit. The electron gas calculations are rather intensive, which is why there is a limited number of calculated radii. Still, this calculation was done on a standard laptop. 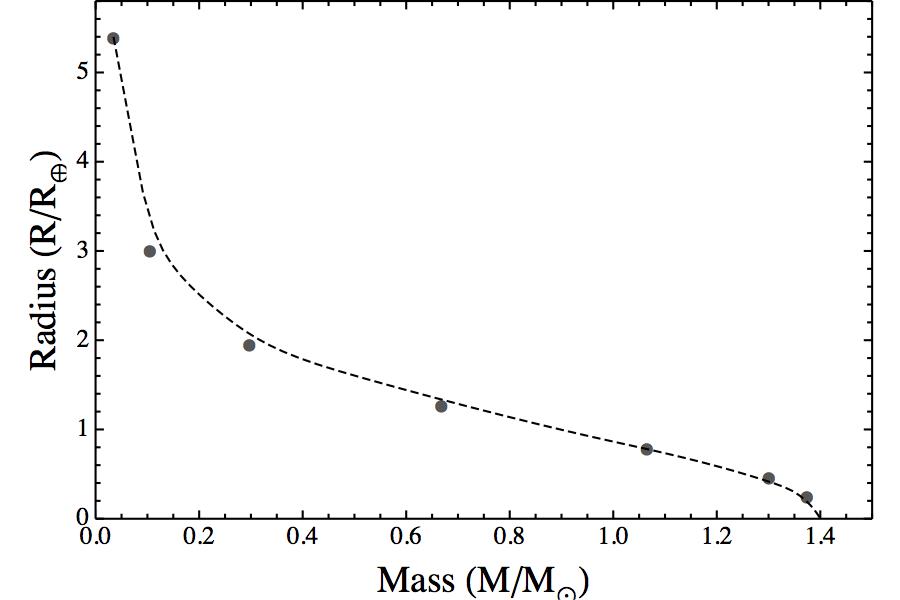 Personal computing has extraordinary power, and when combined with software packages such as Mathematica models can be “played with” in ways that not only reinforce traditional analytic results but also demonstrate broader concepts.

About the Author: Brian Koberlein

Brian Koberlein is the author of Astrophysics Through Computation....