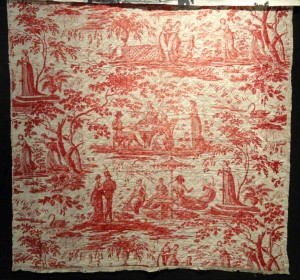 From the mid-seventeenth century onwards, Indian textiles were imported by the European East India companies and were sought after by consumers not just in England, but in most European countries. These were not rare exotic goods: Between 1670 and 1760 the English East India Company imported on average around 15 million yards of Indian cotton cloth a year. These textiles were auctioned in the East Indian companies’ headquarters in London, Lorient or Amsterdam and bought by merchants and wholesalers. They were then sold via a variety of tailors, dressmakers, haberdashers, “cheap clothes” warehouses, either as cloth or ready-made garments.

Indian cottons were sought after by European consumers because of their desirable properties. They were the first textiles whose colour could resist washing and did not fade with light. This explains why in 1696 a London merchant advertised his chintzes “cheickered [sic] with a variety of colours, as Red, Yellow, Blew and Green … wears very well in anything you shall think fittouse it for…”. Silks and woollens could not be so easily washed, whilst linens (used mostly for undergarments) were washed more regularly but were mainly appreciated for their whiteness. Indian cottons were also much cheaper than silks and woollens. Though not as long-lasting as woollens, cottons’ short durability was compensated by the fact that they were seen as extremely fashionable.  Their motifs and design were perceived as exotic in the same way in which Chinese porcelain, Japanese lacquer, chinoiserie, and other Asian goods were.

The inroads of Indian cotton textiles into the consuming habits of Europeans also generated resistance. Moralists agreed that Eastern luxuries 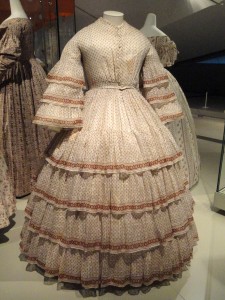 – and cotton textiles in particular – corrupted the moral fibre of society and made a mockery of the “strange Trollops in Callicoe Gowns” as a 1703 comedy at the London Royal Theatre called such plebeian women wearing colourful Indian cottons. Governments too were anxious. As today Western states wish to limit the import of cheap commodities from China and other Asian countries, so in the late seventeenth century a series of legal acts came first to limit and then to ban the trade and consumption of Indian cotton cloth in an attempt to protect the interest of European woollen, linen and silk manufacturers. Cottons were prohibited first in France (1686), in England (part prohibited in 1702 and totally in 1721), and later elsewhere in the Continent. It is difficult for us to understand the animosity that accompanied the passing of these laws. In London, for instance, after the ban of 1721, several women were stripped naked in the street because they were found wearing forbidden cloth.  A certain Dorothy Orwell was assaulted by weavers in Hoxton in London “who tore, cut, and pull’d off jer Gown and Petticoat by Violence, threatened her with vile Language, and left her naked” in the square. In other cases, women found wearing calicoes, had acid thrown at their clothing, a bitter act reminiscent of assaults on women wearing fur at the end of the twentieth century.

Notwithstanding the opposition of moralists and governments, cotton textiles have become part of our everyday wear. Later in the eighteenth century, they came to be produced in Europe – thus dismissing any xenophobic association – and became both the most important industry of the industrial revolution and the most common material for our clothing and domestic textiles.

For more about Cotton, check out our exclusive Cambridge Book Club features.

About the Author: Giorgio Riello

Giorgio Riello is the author of Cotton: The Fabric that Made the Modern World (2013). He is a professor of global history at the University of Warwic...