Into the Intro: The Cambridge Companion to Horseracing 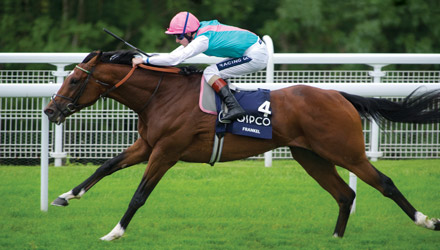 Go Into the Intro of The Cambridge Companion to Horseracing

Today on Into the Intro, we're celebrating one of our favorite national pastimes—The Kentucky Derby, which kicked off this year's Triple Crown races on Saturday. As you gear up for the Preakness and the Belmont Stakes, don't forget to catch up on the history, culture, and legacy of the sport with The Cambridge Companion to Horseracing.

Preview the book’s introduction and a special chronology of horseracing here.

The first episode of Luck, a television series created by David Milch (NYPD Blue, Deadwood), directed by Michael Mann (Manhunter, Heat) and filmed at Santa Anita Park in California, aired on Home Box Office in December 2011. It was immediately taken into a second season and broadcast in Britain in early 2012. In the conservative world of television writing, David Milch is regarded as a maverick genius, known for his uncompromising take on American life. Luck is no Seabiscuit. The first episode weaves together a number of stories: the release from prison of Chester ‘Ace’ Bernstein (Dustin Hoffman), a racehorse owner with links to organised crime; a pick-six attempt by four inveterate gamblers or ‘railbirds’; and a hard boot trainer (Nick Nolte) with a dark horse. It also includes the humane destruction of a horse on the track, its head cradled in the arms of a tearful bug boy. Luck is a complex, unflinching portrayal of violence and corruption at the track. Dialogue- and character-driven, it invites reflection and understanding rather than judgement. Milch, a lifelong race fan and winner of two Breeders Cups, describes his series as ‘a love letter’, albeit an unsentimental one: ‘To me, the track is what the river was to Mark Twain. Where you see the most life and interesting people, go there. That’s what I’ve done.’1 In March 2012, halfway through filming the second episode of the second season, production of Luck was permanently suspended by HBO, when a third horse had to be euthanized as a result of an accident on the set.2

As the brief lifespan of Luck indicates, representing racing is a fraught and complex endeavour. Death stalks the racecourse, along with joy and rapture – something that Luck confronted head on. When, in the first episode, the bug asks a ruined old jockey how to cope with the death of a horse, the jock, played with convincing bitterness by Hall of Famer Gary Stevens, replies, ‘You’ll get over it. That’s why they make Jim Beam.’ This was not a series that ignored or glorified the deaths of animals on the track, but one which encouraged us to confront the costs of our entanglements with animals in a thoughtful and progressive way. To cancel it because of the death of a horse, which died when she reared up, fell and banged her head while being led back to a barn, is to foreclose a potentially productive discussion about welfare. It allows people to return, chomping on cheap burgers, to a comfortable world in which the exploitation of animals can continue as long as it happens off screen.

The reactions of racing enthusiasts to the series, collected in the pages of the Daily Racing Form, were mixed.3 Some complained that Luck was not an accurate representation of the track. Others lamented that this representation would not attract the new fans the sport craves. Although the jury is still out on Luck, part of the purpose of this book is to explore how the morally opaque, troubling image of racing that it presents coexists with alternative historical and contemporary representations which stress its elitist and conservative credentials.

Until recently, a division of labour existed between historians of racing and fiction writers exploring the same subject. As Jane Smiley shows in Chapter 3 of this volume, racing fiction includes murder, conspiracy, cross-class indiscretion and failure. Great authors including Anthony Trollope, George Moore and Ernest Hemingway have used racing as a backdrop to muse on inequality of opportunity, the small tragedies of ordinary lives blighted by bad decisions and the blindness of fate. Many horses and jockeys have died in tragic circumstances on the fictional tracks created by racing’s greatest writers. Historians, until recently, stuck to lists of winners, descriptions of famous races, horses, owners and breeders. Artists fell into both categories. As Douglas Fordham describes in Chapter 2 of the present volume, many painted order and hierarchy, in the image of the establishment they served. Some, like William Powell Frith in Derby Day, turned their backs on the horses and depicted crowds that included thimble riggers, mistresses and infamous murderers. Derby Day is the Victorian equivalent of an episode ofLuck, and when the National Gallery first exhibited it in 1858, it had to erect a barrier to protect it from the large crowds it drew. The Queen loved it too.

New writing about racing is beginning to look beyond descriptions of regal influence and equine heroism to more nuanced, inclusive representations. In North America, Edward Hotaling has described the contribution made by black jockeys to the sport and Steven Riess has exposed the relationship between racing administration and organised crime in New York between 1865 and 1913. In the United Kingdom, Mike Huggins has meticulously documented the often overlooked participation of the middle classes and women in the sport and Donna Landry has unravelled the connections between the Middle East and Europe that framed the creation of the thoroughbred. In Australia, John Maynard has written about Aboriginal jockeys and Wayne Peake has told the story of Sydney’s pony racecourses, the one-time competitor to thoroughbred racing. These and other works urge us to rethink conventional descriptions of racing as an invention of the English aristocracy, which has been exported, unchanged, to the New World. Part of the purpose of this volume is to understand why ideas such as these have endured in place of cosmopolitan alternatives.4