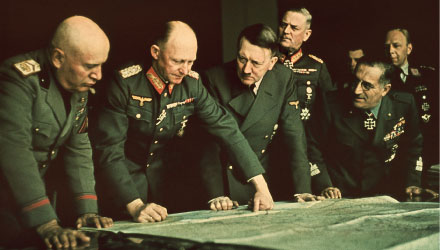 Amidst a sea of titles on World War II and the German army, David Stahel discusses why a careful study on this German campaign in the eastern theater raises new questions about the war we think we know.

In deciding to write a new book on Operation Typhoon I guess the first question is why bother? Reading books in some other areas of the Second World War one has at times the impression that authors are struggling to find anything new to say in order to distinguish themselves from the mass of previous writings. This not to suggest that new and exciting books could not be written on such well-worn topics as D-Day or the British war in North Africa, but it is clear that matching an exciting original perspective with academic credibility is becoming increasingly difficult. One of the exciting things about researching Germany’s war in the east between 1941 and 1945 is that the field is still at such an early stage of its development with many more questions than answers.

Perhaps the most striking thing about Hitler’s war in the east is the sheer scale of the operations under way. This can, however, also be a daunting, even frightening, prospect for the researcher. Million man armies produce millions of pieces of paper and distilling these down into a coherent and accessible manuscript is no mean feat. Operation Typhoon involved some 1.9 million men on the German side alone and almost three million in total took part in the fighting. When one then considers that this was only the central part of the eastern front, one gains an appreciation for just how vast this war really was. As researchers it also tells us to think critically about what we know – or think we know – about any given period. Exhaustive research on any aspect of the war in the east is a grand claim and my visits to the main German military archive in Freiburg always feel like a frantic ‘smash and grab’ heist – so many riches and so little time to get them.

Since I researched and wrote my first book on Germany’s war in the east I have found just how much room for reinterpretation there really is (prospective PhD students take note).  Writing Operation Typhoon required six solid months of research and note taking and I soon came to the conclusion that only the month of October could be tackled in this book (with another to follow on the period November 1 to December 5 1941). If the devil is in the detail, as they say, then this approach is the only way we can begin to comprehend what was really going on inside such a massive force as the German Ostheer (eastern army). More importantly, to return to our starting point, historians of Nazi Germany should expect to encounter – and for decades to come – many new and exciting revelations about the eastern front. The archives no doubt hold the keys to many long-standing mysteries and forgotten battles, all just waiting to be discovered. Far from being an exhausted topic, I am of the opinion that we’ve barely scratched the surface and it is my hope that Operation Typhoon is one insight into that new world of discovery.